Michael Oher has found his happily ever after! The former NFL star who was the inspiration for the 2009 Sandra Bullock film The Blind Side has tied the knot with his longtime girlfriend Tiffany Roy.

As per a report by People magazine, Michael and Tiffany got married on November 5, 2022. Keep scrolling to catch more insights about the wedding ceremony of Michael Oher and his girlfriend Tiffany Roy. Michael Oher and his longtime girlfriend Tiffany Roy are married

It has been reported by People magazine, that Michael Oher and his longtime girlfriend Tiffany Roy officially became husband and wife on November 5, 2022. The couple exchanged their vows in a lavish ceremony on Saturday.

The pair’s extravagant wedding took place in Nashville, Tennessee. According to the publication, the two lovebirds who have been together for 17 years walked down the aisle in front of more than 200 guests.

On Tuesday, Oher took to his Instagram page and shared a beautiful snap of himself and Tiffany from their wedding day. He started by writing, “Filled with joy, can’t believe people took their time and came to celebrate! My beautiful wife, I love you so much, thank you for blessing me with our family! Easily the best single weekend I’ve ever been apart of.”

“Not being from the area everyone came to was even more special. I won’t be able to tell everyone thank you, if I saw you this weekend , thank you! I’m complete, let’s keep trending upward! ❤️❤️❤️,” he wrote alongside the picture.

How did Oher and Roy meet each other?

For those of you who are unversed, let us share with you, Oher and Roy met each other for the first time at the University of Mississippi. Before taking the big decision of getting married, the couple had been together for a total of 17 years.

We must say these two lovebirds have been with each other through thick and thin. Michael and Tiffany are proud parents of four. The couple share sons Kobi and MJ and daughters Kierstin and Naivi. 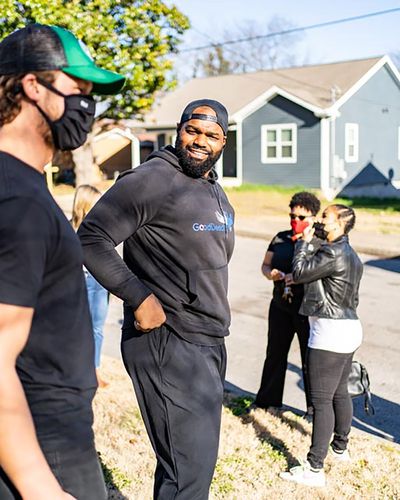 When did Michael and Tiffany get engaged?

Michael and Roy got engaged in July 2021. In an interview with the magazine, the bride, said, “Everything about Michael I love. He puts me first no matter what he has on his schedule … and he makes sure his family is taken care of and loved.”

Tiffany spilled the beans on her wedding to Oher and told People, “The most magical part was our vows. To hear Mike express his feelings in front of 200-plus people was astonishing and romantic. I really felt like a true Queen.” The media outlet reported that the pair’s son Kobi escorted his mom Tiffany down the aisle, meanwhile Beyoncé’s Halo played in the background.

We send our heartiest congratulations to Michael Oher and his now-wife Tiffany Roy as they are all set to embark on a new journey in their lives. Sending them lots of love, light, and laughter. Don’t forget to stay tuned with us for the latest updates from the world of showbiz.