You probably didn’t know that Megan Fox and Machine Gun Kelly, also known as Colson Baker, are both pop-punk’s most famous power couples now that the 2020s have arrived, but I bet you didn’t think they’ve been together for quite some time.

On the set of Midnight in the Switchgrass, M.G.K. met Megan in January 2022, just a few weeks before they got engaged. They met as friends before they became engaged in January 2022. No matter how hard you try, it’s impossible to stay away from these two, whether you want to admit it. 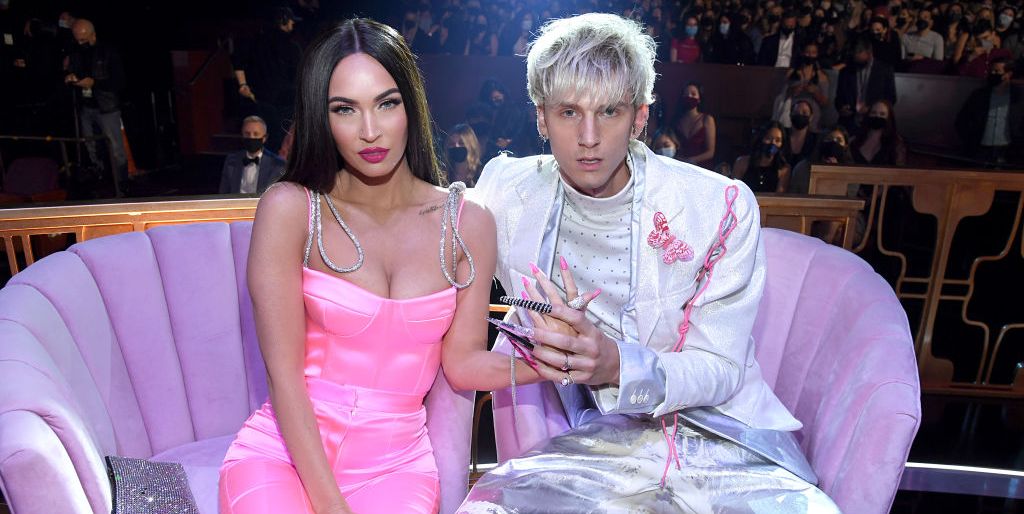 The singer/actor Machine Gun Kelly entered into a romantic relationship with Megan Fox after she separated from her husband of over a decade Brian Austin Green. On the set of the independent film Midnight In The Switchgrass, the two began dating in 2020 after meeting on set.

After that, the past few months have been a blur of P.D.A.s, stinking mirror selfies, and an engagement! From the most recent update on Megan and Machine Gun Kelly’s relationship, here is an in-depth look at their relationship timeline.

M.G.K. And Megan Fox Met On The Set Of Midnight In The Switchgrass In March 2020

While filming Midnight in the Switchgrass, Fox and Kelly met for the first time in Puerto Rico. As of March 11 of the same year, the rapper shared a photo of his cast chair and Fox’s cast chair. These chairs were set up next to each other on the movie set.

As it was reported the next day, production had been halted on March 16 because of the pandemic. The cast and crew had been flown home as a result.

Megan Fox And M.G.K. Have Been Spotted Together In California In May 2020

As the couple was spotted together more than once in May, a source told PEOPLE that Fox and Kelly had been spending time with each other at Megan’s house. The source added that they seemed to have fun together and looked very happy as a couple. Only when Megan is with Brian does she get to see him.

As a result of the divorce, Fox’s former husband, Brian Austin Green, announced the couple’s separation shortly after nearly ten years of marriage. The actor spoke about his distance from Fox before she left to film Midnight in the Switchgrass. This was in an episode of his podcast with Brian Austin Green.

In The Video For M.G.K.’s “Bloody Valentine” Music Video, Megan Fox Starred As The Lead Actress 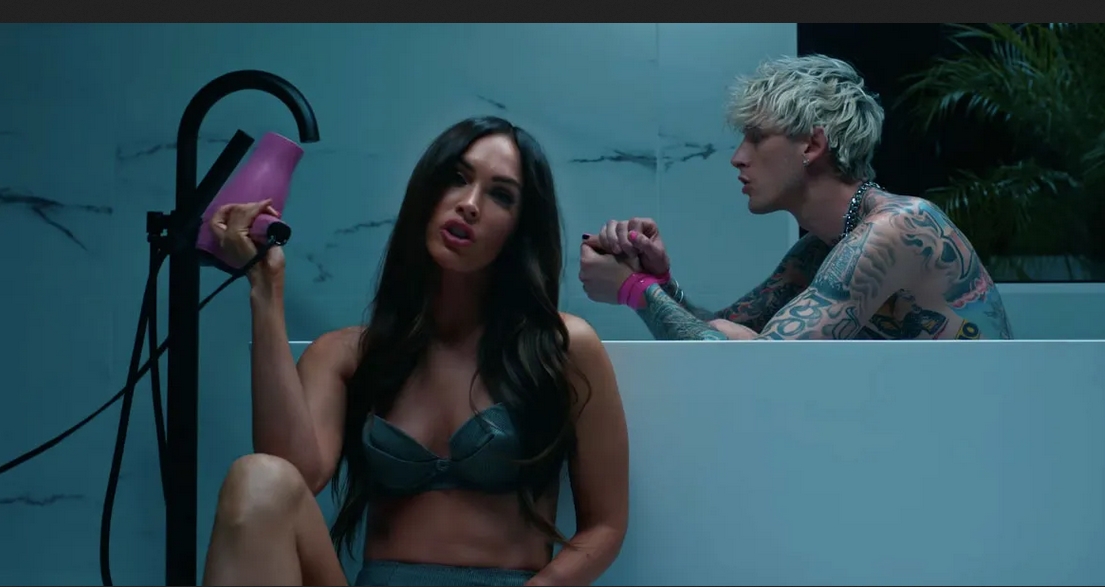 Fox appeared in Kelly’s “Bloody Valentine” music video, pictured displaying his rumored romance with Kelly. As seen in the video, Jennifer’s Body star, M.G.K., is tied up during the act, in which she is duct-taped to M.G.K.’s mouth to take him as a hostage.

In addition to posting a B.T.S. clip of Fox ripping duct tape off his back to promote his steamy album, the rapper also uploaded an official video.

The Daily Mail published photos of the couple embracing after a night in Sherman Oaks, California. This was a day before the Daily Mail published pictures of them holding hands and kissing each other. Kelly appeared to be referencing a line from the film “Bloody Valentine,” stating, “I’m calling you ‘girlfriend,’ what the f—? Life imitates art on that one.”

Kelly’s video interview with Teen Vogue indicated that he chose “Bloody Valentine” as one of his favorite videos based on other more personal reasons and hinted at what his costar might have contributed to the video.

During the interview, he further divulged that Fox had a pedicure before filming, adding, “It’s no secret. I think feet are beautiful. And I think Megan has the most beautiful feet that exist.”

M.G.K. Makes Their Relationship Official On Instagram On July 28, 2020 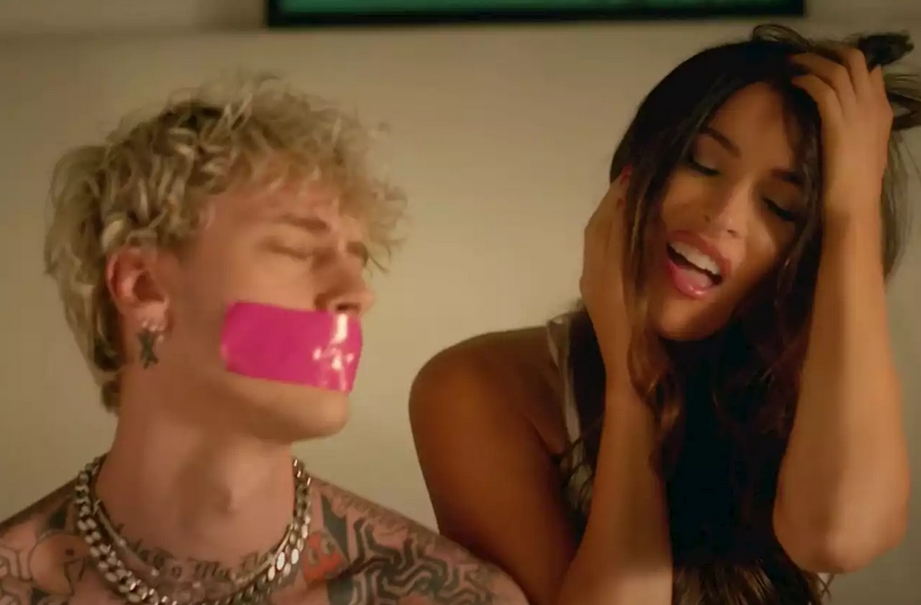 The Relationship Between Megan Fox And M.G.K. Was Revealed On Megan Fox’s Instagram On August 5, 2020

On the Howard Stern Show, Kelly talked about the time she fell in love with Fox after appearing on the show. However, when he made eye contact with me, his eyes went wide, and he revealed that he had no idea what love was.

While Fox was featured as the cover star of Nylon, she revealed that she had a deep, mythic connection with Kelly, saying that the two have an inexplicable connection. 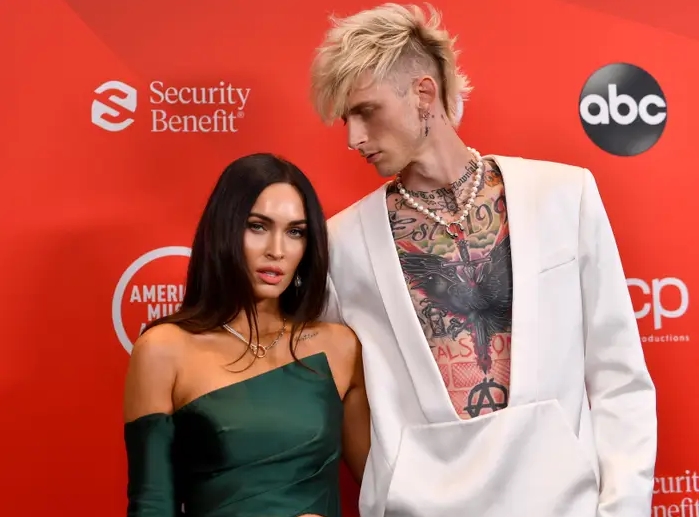 There is also a new tattoo on Fox’s shoulder that says, “El pistolero,” and sources believe it is in honor of her boyfriend. Although she has not confirmed the tattoo’s significance, it certainly appears to be in honor of him.

It was Kelly’s pleasure to share how Fox supports Dave Franco’s mental health in an interview that he did for Interview magazine.

M.G.K. revealed that “When you have a partner, mine being Megan, sitting there with you on those nights when you’re sweating and not being able to figure out why you’re so in your head, to help you get out of your head and put it in perspective, that helps.”

On January 29, 2021, There Were Rumors That Megan Fox And M.G.K. Would Be Getting Engaged 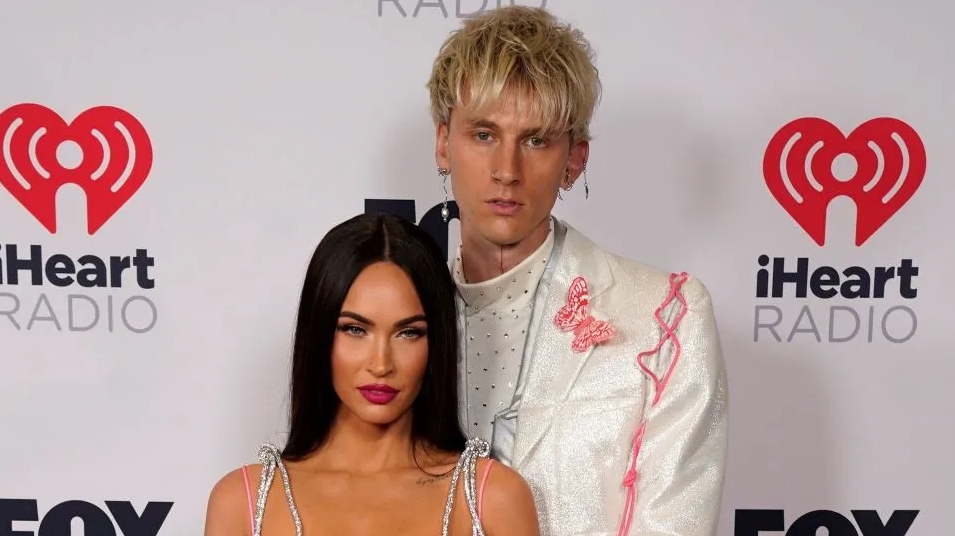 It was reported at the time by PEOPLE, however, that a source confirmed to them that the two were not quite there yet. As well as shutting down the rumors, Fox debuted an NSFW ring on her Instagram Stories, which appeared to dissolve the gossip. The post was also accompanied by a side-eye emoji and the words “F— You,” which she added for good measure.

The next day, Kelly made his debut on Saturday Night Live along with Fox, who was able to support him on the big night. Taking to Instagram to support her boyfriend, she called his appearance the highest-performing performance she had ever seen on the show.

The couple celebrated their first Valentine’s Day together as a couple by sharing a gallery of pictures and videos to commemorate the event. Kelly shared a photo of a necklace that looked like it contained a drop of blood and a collection of other images and videos.

Taking a screenshot of the post, he captioned it: “I wear your blood around my neck.” The actor also shared several intimate snaps and a heartfelt poem that he captioned with the post. 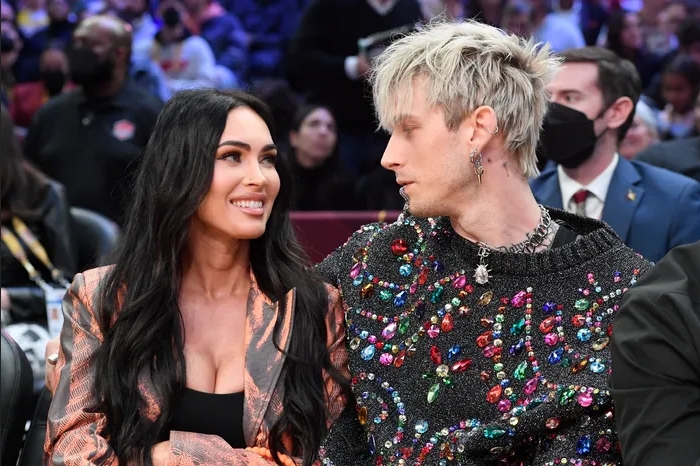 For the 2021 BBMAs, the couple stepped out in coordinating black ensembles, which made them the talk of the event. It was Fox who looked stunning in her sexy Mugler dress with its cut-out neckline, while Kelly turned heads with his black-staining tongue that turned heads.

The two friends took the stage at the V.M.A.s along with Kourtney Kardashian, who has since married Travis Barker, to introduce their significant others as they performed “Paper Cuts.”

The First Joint Magazine Cover Of Megan Fox And M.G.K. It was Published On October 11, 2021

There is a video of the couple revealing that they met in passing at a G.Q. party in Los Angeles a couple of days ago. The first time they had a chance to converse, Kelly told Fox that he smelled like marijuana during their initial encounter. Fox replied by saying, “I am a weed.”

Aside from “thousands of roses,” they also revealed that their first date was accompanied by sushi and an unconventional first kiss during which they literally “breathed each other.” 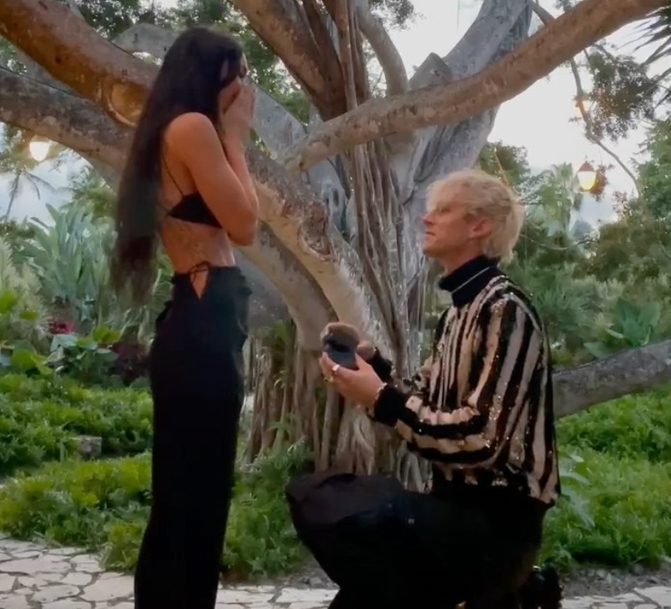 Kelly proposed to Fox in early 2022 after dating for over a year. As part of their Instagram announcements, the couple shared videos and photos of the first day they sat under a banyan tree, where they first sat in July 2020, during which they proposed.

Machine Gun Kelly Attended The Premiere Of Good Mourning, The New Movie By Megan Fox, On May 12, 2022

They wore coordinating pink outfits as they made their way to West Hollywood, California, to attend the premiere of their film Good Mourning together.

At the premiere event where Kelly spoke with PEOPLE, the actor added that it was a collaboration between him and his fiancée to direct his fiancée in the film.

In An Award Show Interview On May 15, 2022, Machine Gun Kelly Refers To Megan Fox As His Wife

In the weeks before his performance at the Billboard Music Awards, Kelly and Fox walked the red carpet together, sparking rumors that the couple was engaged when Kelly dedicated his song “Twin Flame” to Fox. “I wrote this song for my wife,” said the singer on stage as he launched into the music.

Megan Fox And Machine Gun Kelly Attend The Wedding Of Kourtney Kardashian And Travis Barker On May 22, 2022 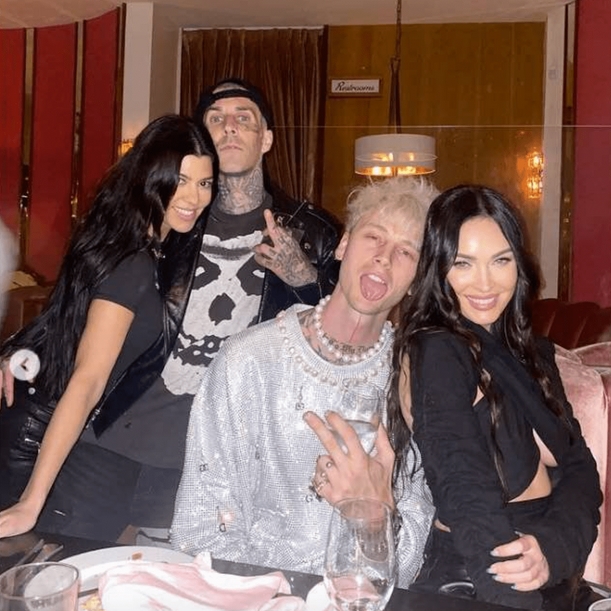 In Portofino, Italy, Kourtney Kardashian and Travis Barker exchanged vows in front of an intimate group of family and friends during their wedding ceremony.

As part of the launch of M.G.K.’s new Hulu documentary, Life in Pink, the two attended the premiere in New York of all-pink looks to celebrate the release.

After they were spotted getting lunch together, the pair were seen having lunch in Brentwood, California. A few months before the couple’s outing, there was speculation that they had broken up since they hadn’t shared any photos of each other on social media for a while. 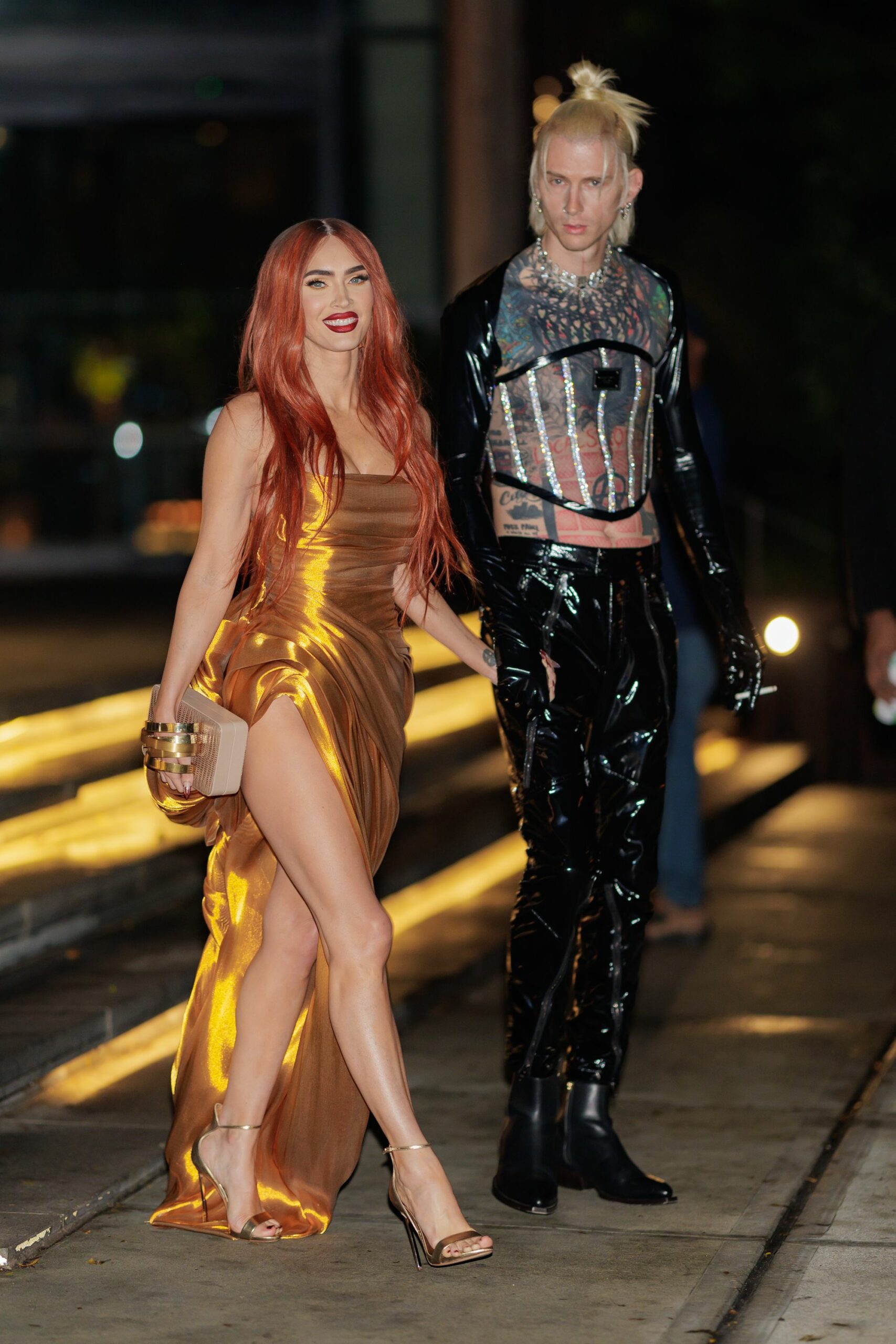 Fox and M.G.K. stepped out together for the Time100 Gala in New York City, where Fox debuted her fiery red locks for the first time. With her shiny, copper-colored gown, she paired it with slouchy heels that beautifully complemented her hairstyle and copper outfit.

Meanwhile, M.G.K. wore a black latex jacket and pants with black latex sleeves, which exposed his tattooed torso beneath the clothing. A set of man buns was also slicked back on the musician’s long, platinum hair, which he wore slicked back in a series of backward slicks.

The actress responded in the comments section of M.G.K.’s Instagram post on Friday following the first photos he shared of himself with Fox backstage at the Time100 Gala. “Never has anyone with better bone structure walked this earth😍Exquisitely, devastatingly handsome. And 6 foot 5? Kill me or get me pregnant. Those are the only options,” according to Fox’s post.

A New Film Called Taurus Was Released On October 27, 2022, Which Starred Megan Fox 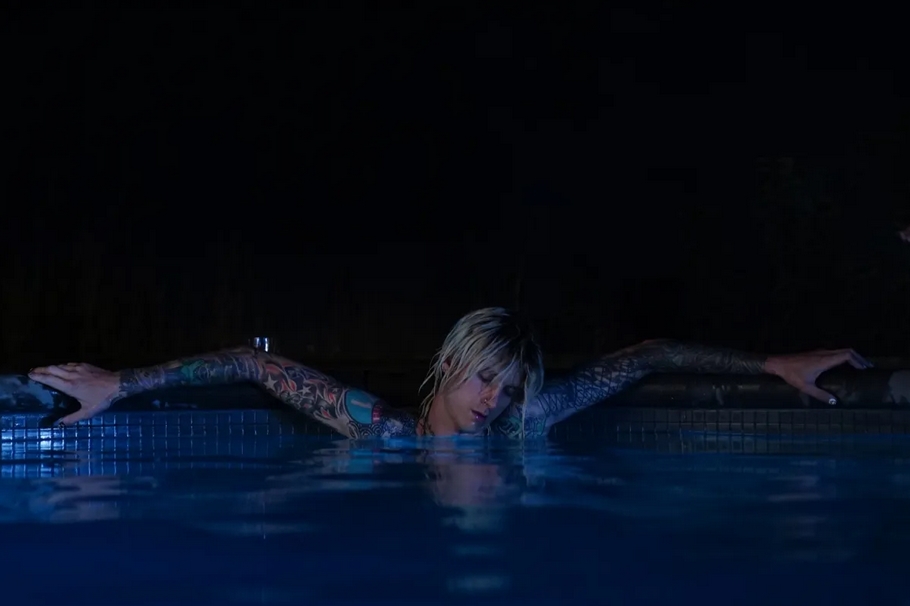 In the movie Taurus, M.G.K. plays the role of a troubled musician, and Fox plays the role of his ex-girlfriend, who plays his current girlfriend. This film explores the peaks and valleys of the life and times of a celebrity who works in the music industry. It also reveals the challenges that come with that life and profession.

In the official trailer for the movie, Fox makes a brief appearance. She’s seen hugging M.G.K. in the studio while watching the film.

Fox and Kelly plan on starting a new life together, so we wish them a pleased and prosperous future. In your opinion, how do you feel about the chemistry between the couple? Comment below and let us know what you think.