Kim Kardashian said, “Nobody wants to work these days” and Jameela showed her the right way to work! Kim Kardashian is not gonna be best friends with Jameela Jamil and that’s the tea! Kim Kardashian surely benefits everyone with her statements and views. This week, a cold feud is brewing after Kim Kardashian has expressed her views on working women.

The Good Place actor is not settling with the statement passed by the SKIM founder and people are gathering to hear all the tea. So here’s everything you need to know!

In an interview with Variety, Kim, Khloe and Kourtney Kardashian along with their mom Kris Jenner were asked about opinions on working women ahead of the 14th April premiere of their upcoming Hulu TV series “The Kardashians”.

I think if you grew up in Beverly Hills with super successful parents in what was simply a smaller mansion… nobody needs to hear your thoughts on success/work ethic. This same 24 hours in the day shit is a nightmare. 99.9% of the world grew up with a VERY different 24 hours. https://t.co/tvafFIyk92

Kim’s statement is doing rounds all over the internet for sharing her “advice” for working women that goes, “I have the best advice for women in business. Get your f—ing ass up and work. It seems like nobody wants to work these days.”

Many celebrities and personalities are expressing their views on Kim’s recent advice including Jameela Jamil who has some strong points criticizing the SKIM founder’s statement.

Calling out Kim on her “advice” statement, Jameela Jamil took her Twitter and expressed that, for someone who grew up in Beverly Hills. I just want to point out that she had parents who were super successful and she lived in a mansion.

She came up from the mean streets of Beverly Hills with very successful parents/step parents… but in a *much* smaller mansion. A TRUE GRIND. An inspiration. A photoshop icon.

What’s she got to say about success? If you’re living the same 24 hours we are, it’s not the same thing – a nightmare that 99% of the people grew up with.

People are strongly supporting Jameela’s views against Kim’s statement. One follower pointed out that what would be Kim’s work ethic if she had to give up on her assets, struggle with oppressive loans, and get a job with a minimum paid wage.

Jameela responded to that comment by saying, It’ll be over if they take away their photoshop, they wouldn’t have what they have. She added, “ if your arse is not even yours, don’t bother talking about anyone else”.

A Little About Jameela Jamil 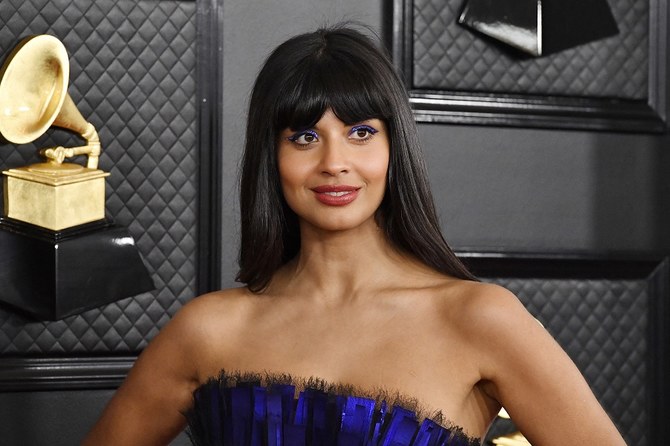 Jameela Jamil is a British actor, model, and activist of South Asian origin. She’s started her career as a model & photographer but got into TV hosting & acting afterward. She’s probably best known for her voice-over work in The Powerpuff Girls.

Having grown up in a dysfunctional family and fallen victim to terrible things such as rape and an accident, she had to overcome these experiences in order to get where she is today. She rose above all of that to become a successful star.

She became a household name thanks to her role as ‘Tahini” in the American TV show ‘The Good Place.’ A successful model before this, she also hosted the BBC Radio Chart and made radio history as the first solo female presenter.

Later, she established herself as a bankable voice actor, too.

By the looks of it, it is sure to take Jameela seriously for what she says. We believe in strong voiced opinionated women who support each other!