Kim Kardashian previously came under fire for wearing Marilyn Monroe’s iconic dress. Her claim that she lost 16 pounds in three weeks to fit in the dress seems to be less convincing. Now, Kim is being slammed for damaging this iconic dress. Read on to learn more about it. 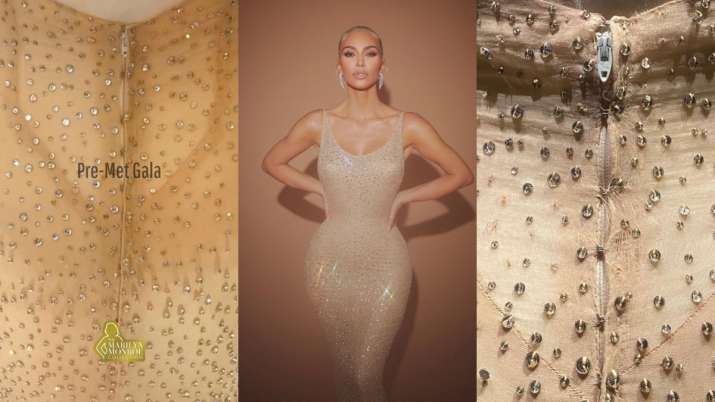 Stretched Fabric, Missing Crystals and What Not!

A post shared by The Marilyn Monroe Collection (@marilynmonroecollection)

They say, money can buy you anything but they didn’t say that money can’t buy you Marilyn Monroe’s looks. Well, that is the case with “Keeping Up With The Kardashian” stars who were Marilyn Monroe’s iconic dress at the 2022 Met Gala. She previously came under fire as netizens called the step an insult to the legend

However, per several reports, it has been established that Marilyn Monroe’s iconic dress got damaged after Kim Kardashian wore it at the star-studded event, and netizens are very angry. And why not, it was a 60-year-old heritage of an iconic star.

The Marilyn Monroe Collection shared a before and after photo of the dress on their Instagram account, which depicts missing crystals and others hanging by a thread, stretched fabric and more.

The post also references previous articles detailing the exhaustive efforts made by Ripley’s Believe It Or Not! Museum to preserve the gown, which included a security team to oversee Kim’s every move and a representative who was allowed to pull the plug whenever they wished. Well, Kim’s figure managed to do the damage against all the precautions. Kim Kardashian claimed that she lost 16 pounds in two weeks before the 2022 Met Gala to fit in the historic gown and that she even changed into a duplicate once she arrived at the party since she could not move freely in the original. Her look became the most talked about look of the night. Ahead of the party, the “Skims” founder stated that “I’m extremely respectful to the dress. I would never want to sit in it or eat in it or have any risk of any damage to it and I won’t be wearing the kind of body makeup I usually do.” Oh, well, that is not the case here. Damage is already done to the “world’s most expensive outfit” and Kim is to be blamed.

The history behind the Dress FYI, this is the same dress that Marilyn Monroe wore when she performed for President JFK’s birthday in 1962. Remember when she was surrounded by controversies for being the only person present on the stage and singing “Happy Birthday, Mr President”. Kim visited the museum in April with her boyfriend Pete Davidson which already sparked rumours that she could be wearing a vintage piece. The 41-year-old star revealed in an interview that she would not be able to tailor her Met Gala gown at all. She said, “I think it will be up to the last minute because it can’t be tailored, so I have to fit into it exactly.”

The initial price of this dress back in the 60s was $12,000 and was designed by Jean Louis. It was reported so tight that Marilyn had to be sewn into it before her performance. Well, many people, including Bob Mackie, who sketched Marilyn Monroe’s famous gown in 1962, slammed Kim Kardashian previously for wearing this dress and called it a “big mistake”.

The dress was loaned to Kim from Ripley’s Believe It or Not! to wear to the 2020 Met Gala. Bob revealed that no one has worn this dress to date until Kim laid her hands on it. Bob said:

“I THOUGHT IT WAS A BIG MISTAKE, [MARILYN] WAS A GODDESS. A CRAZY GODDESS, BUT A GODDESS. SHE WAS JUST FABULOUS. NOBODY PHOTOGRAPHS LIKE THAT. AND IT WAS DONE FOR HER. IT WAS DESIGNED FOR HER. NOBODY ELSE SHOULD BE SEEN IN THAT DRESS.”

Bob Mackie, who served as an assistant to Jean Louis, also said that “[Marilyn] was a goddess. A crazy goddess, but a goddess. She was just fabulous. Nobody photographs like that. And it was done for her. It was designed for her. Nobody else should be seen in that dress.” Well, isn’t that true?

Seeing the damage to Marilyn Monroe's iconic gown – the one that ANY dress historian could have told you was going to be damaged – is making me see red. Fuck Ripley's, they're not a museum they're a shitty for profit tourist attraction. Also fuck the person who wore it.

Kim Kardashian has done some huge damage to the world’s most iconic dress which has been preserved in good condition for 60 years. As soon as the news broke, many people began cursing Kim for the damage she caused to the dress.

Marilyn Monroe was sewn into that Iconic Dress
I don’t know if it was Damaged but if Kim Kardashian had a COPY Made to wear afterwards she should have just Worn THAT !!!

One Twitter user wrote, “Kim should’ve never worn that dress, to begin with. I mean yes it’s nice to pay homage to Marilyn but she could’ve had a new dress made and replicated. This was a timeless and iconic artefact that’s been ruined.” Another user wrote, “Question is: Why did someone let Kim K. wear Marilyn’s dress?”

One person tweeted, “They really let her ruin a historical artefact for an underwhelming look that wasn’t even on the theme.” Another person tweeted, “Leave it to Kim to destroy a historical (sic) piece of art.” A third sarcastically added, “Congratulations to the Met Gala for showcasing a real-life example of why a conservation department like the Costume Institute is necessary for historically significant garments.”

While Ripley’s museum issued a press release right after the dress was back at the museum stating “great care was taken to preserve this piece of pop culture history”, pictures that have now surfaced on the internet seem to contradict it. What do you think about it?