Actress Lily Anne Harrison and her fiancé Peter Facinelli are all set to welcome their first child together! The 33-year-old Christmas Camp actress revealed the big news on June 25 by sharing a post on Instagram.

Sharing a picture of hers in a black and red floral top, she gave a sneak peek of her baby bump. She captioned the picture, “Not a burrito belly ??”.

By mentioning in the caption that it is not some food belly, she further made it clear that she is expecting her first child with the man of her life Peter Facinelli.

In response to Lily’s post, Peter wrote in a funny way, “You’re pregnant? Why didn’t you tell me?”

After Lily shared this exciting news, Lily and Peter’s friends and well-wishers hopped to the comments section to congratulate the duo. 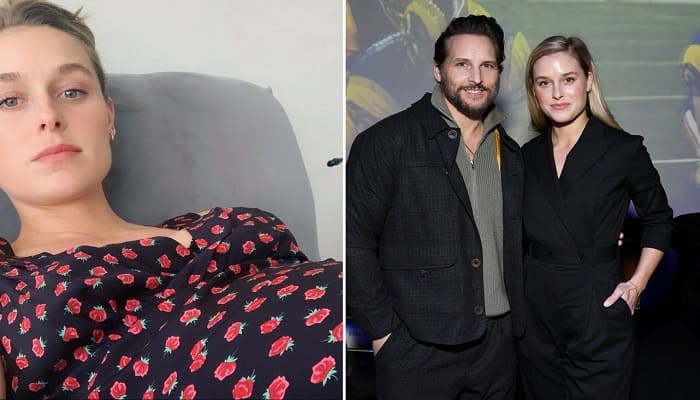 Actress Sarah Wynter commented, “so excited for you and @peterfacinelli LOVE this!!”

DJ Lindsay Luv expressed her happiness for the parents-to-be by writing, “Yessss!!!!! Can’t wait to meet this beautiful bb 🙌🙌🙌🙌 been waiting for this 📣 👏👏👏 so happy for you and @peterfacinelli ❤️❤️❤️” Lily and Peter got engaged around New Year’s Eve, 2020 according to PEOPLE magazine. The Supergirl star proposed to his lady-love during a beachside dinner in Dec 2020 while they were on a holiday getaway to Mexico.

Peter’s representative shared with Us then, “Peter and Lily got engaged over the holiday during a romantic getaway to Mexico. Both are beyond elated and are very much looking forward to all that the New Year will bring.”

However, their wedding ceremony has been delayed due to the coronavirus pandemic.

Last year, during an interview with PEOPLE, Peter revealed how their wedding plans have been delayed due to COVID-19. He also said that they would probably take their wedding vows the next year (2022). He said, “I want (the wedding) to be in a world where there’s no masks… There’s no rush for us. We’re devoted to each other and we’re living a life together.”

He also shared that he feels as if he is already married. He said, “We have everything besides the piece of paper and the party!”

In recent years, Lily appeared in the films – Good Deed and Breaking & Exiting along with the TV shows – Two Guys One Truck, and One Tree Hill.

Well, the 48-year-old Twilight star is already a father to his three daughters – Luca Bella (24), Lola Ray (19), and Fiona Eve (15) whom he shares with his former wife Jennie Garth. Peter and Jennie tied the knot in 2001 and parted ways after around 11 years of married life in 2012.

And, now with the little baby on the way, Peter is set to become a father for the fourth time.

After his separation from Jennie, Peter got into a relationship with actress Jaimie Alexander in 2012. They got engaged in March 2015. However, in less than one year, the two announced that they have called off their engagement in Feb 2016.

Bookmark this space and stay in touch for all the updates from the world of showbiz!