Spanish-American internet personality Lele Pons’ biggest strength is loving herself and comfortable being who she is. The 26-year-old YouTuber recently shared a body-positive picture following appendix surgery. In her Instagram post, the social media star shared a picture of her stomach, Lele revealed how the surgery affects the stomach, but she’s recovering and is in great spirits. 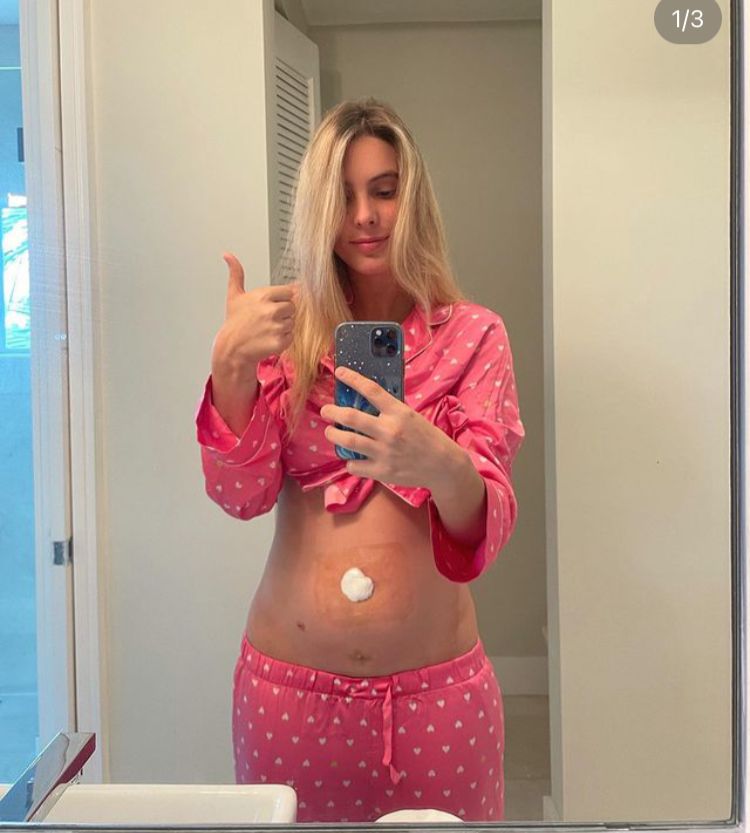 Lele Pons, 26 is known for spreading body-positive messages to her millions of fans. The Secret Life of Lele Pons star recently underwent appendix surgery. She took to Instagram and shared a picture of herself, revealing the after-effects of the surgery in her caption.

Lele wrote, “Recovery ❤️‍🩹 (Appendix Surgery). Feeling better! My stomach is still very bloated due to the surgery but will go down in a couple of days! Thank you for the beautiful messages, love you guys ❤️.” In the picture, Lele can be seen wearing a heart-print night dress. The internet personality showed her fans, how her stomach is bloated following the appendectomy but is in the healing stage.

Her post has received more than 1M likes. Fans and celebrities immediately took to Instagram to send their wishes to their beloved social media star. Columbian singer, Sebastian Yatra wrote, “Love you get better ❤️‍🩹❤️‍🩹❤️❤️.”
Johann Vera wrote, “We love you! With everything.” Steve Aoki wrote, “Heal fast and strong!!! ❤️🤗”. Jenn Morel wrote, ” sending healing vibes.” Lele’s after-surgery picture reveals that she’s healing quickly, and would be back to her normal routine in no time.

Lele Pons underwent appendix surgery just five days back. She shared an IG post alongside her boyfriend, Puerto Rican rapper Guaynaa. She captioned it: “Getting ready for my Appendix Surgery! 🙏🏼 Here for each other always ❤️ @guaynaa.

She continued, “This is an emergency procedure where doctors remove your appendix when it’s inflamed. if not treated immediately, it can be life-threatening. Luckily we caught it early on. This is a short surgery and a fast recovery. I’ll be back in a couple of days ❤️.”

FYI, after an appendectomy, patients usually recover pretty quickly. Well, it always feels good to get a bad appendix out. Usually, a patient is discharged after 1-2 days after the surgery and can get back to their normal routine within 2-4 weeks.

Lele Pons needs no filters to fit among the social-media standards set by several celebrities. She is known for celebrating her body, for what it is. Previously, Lele Pons shared a picture in her body suit, stating: “Embrace your Cellulite”. Her post receievd more than 1 million likes in just three hours.

She revealed how she used to feel insecure about her cellulite, and shared in her caption that she often used to hide it and edit them in the photos. FYI, Cellulite is a skin condition that is more common for women than men. Over 80% of women at some point in their lifetime face this problem. Men, on the other hand, might encounter it only 10% of the time. In several instances, Lele has openly spoken about her insecurities and how she overcame them. In another post, she shared before & after pictures of her changing physique with fans. Pons came to prominence on ‘Vine’ before the platform shut down in 2016.

The 26-year-old social media personality has since branched out, creating comedy sketches for YouTube, where, as of November 2020, has over 17 million subscribers. As for body positivity, Lele says, right, “Embrace your true self.” We wish the star a speedy recovery!