Ladies and gentlemen, put your hands up for Mr. and Mrs. Barker. Recently, the former Keeping Up With The Kardashians alum Kourtney Kardashian got married to her beau Travis Barker for the third time in a lavish ceremony in Portofino, Italy. Keep scrolling to catch more insights about their wedding ceremony. 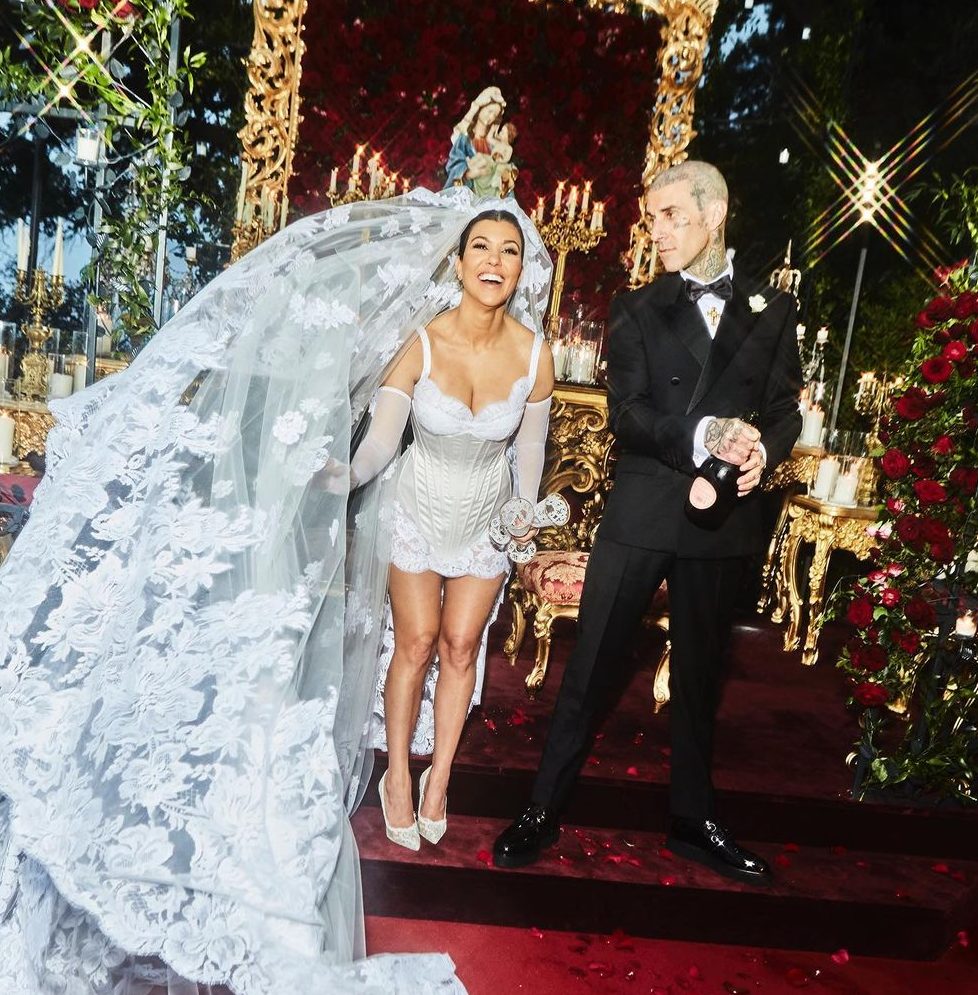 All you need to know about Travis and Kourtney’s wedding

Post a Las Vegas wedding in April and a courtside wedding in Southern California on May 15, 2022, The Kardashians star and the Blink-182 drummer exchanged their vows on a red-carpeted altar at the 16th-century Castello Brown in the village of Portofino in Italy on May 22.

Kourtney took to her Instagram to share the beautiful pics from one of the most special days of her life. She posted a series of pictures from their Italian wedding ceremony on the social media platform Instagram. “happily ever after”, she captioned the post.

The couple tied the knot in a grand outdoor ceremony in front of their close friends and family. The whole Kardashian clan was present at the duo’s wedding including Kourtney’s kids, Mason, 12, Penelope, 9, and Reign, 7, and Barker’s children Landon, 18, and Alabama, 16. His step-daughter, Atiana De La Hoya, 22 also attended the wedding.

Kourtney shares her three kids with Scott Disick, on the other hand, Travis co-parents his kids with ex-wife Shanna Moakler. Neither Scott nor Shanna were spotted at the pair’s wedding.

Who walked Kourtney down the aisle?

Kourtney’s mom Kris Jenner walked her down the aisle. Her dad Robert Kardashian passed away in 2003 in Los Angeles, California, United States. Atiana and Alabama played the role of bridesmaids while Penelope served as the flower girl. Kardashian’s youngest son Reign was the ring bearer. Kourtney and Travis had an intimate courthouse wedding on May 15

For those of you who don’t know, a few days before their Italian wedding Kourtney and Travis got legally married in Santa Barbara, California in the presence of her grandmother Mary Jo “MJ” Campbell and his dad Randy Barker serving as witnesses.

At the time, a close source told E! News, “Kourtney is over the moon and so excited to start this next chapter with Travis. They were excited about this day and madly in love.” The pair confirmed the news of their courthouse wedding by dropping black and white photos on Instagram. Kardashian wrote, “Till death do us part” in the caption of the post.

This year, in April, these two lovebirds surprised everyone by getting hitched in Las Vegas after the Grammys. It was later revealed that they didn’t get a marriage license. They began dating in 2020 and got engaged in October 2021.

We send big congratulations to Kourtney Kardashian and Travis Barker as they are all set to embark on a new journey in their lives. Sending them lots of love, light, and laughter. Don’t forget to stay tuned with us for the latest updates from the world of showbiz.