Appearing in his full-grown beard, Jimmy Fallon welcomed “The Big Bang Theory” star Kaley Cuoco who appeared in a shimmering black jacket, as if she just came over from a disco party. During their extensive conversation, Kaley shared about how she met her boyfriend Tom Pelphrey. She also shared meeting her “Meet Cute” co-star Pete Davidson in an escape room. Read on to know all about this funky conversation.

Kaley Is Terrible At Drawing… 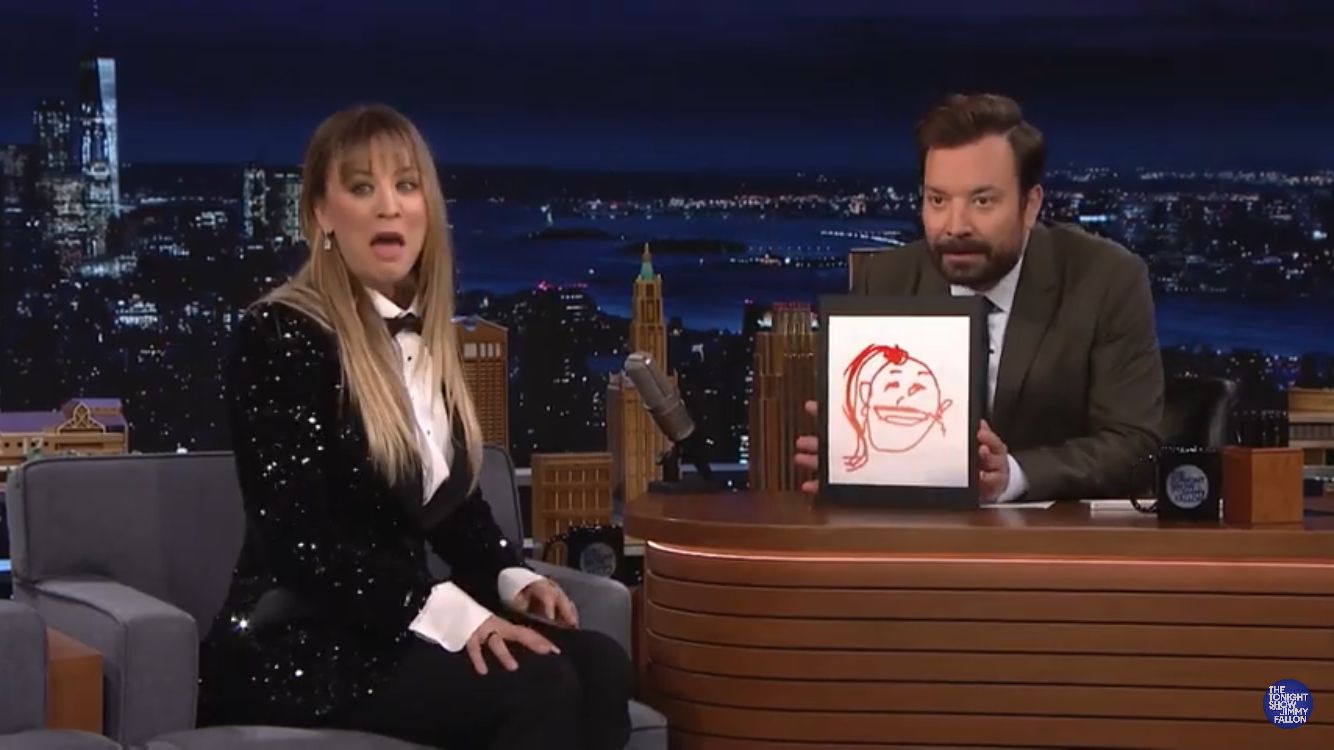 Before moving to the big question about her boyfriend, “Ozark” star Tom Pelphrey, Kaley Cuoco revealed that the one thing that gives her major anxiety is drawing. The 36-year-old actress revealed that she is terrible at drawing, and said: “I cannot draw a stick figure.” Jimmy revealed a self-portrait of Kaley, courtesy of Kaley Cuoco, and indeed, it was absolutely terrible.

Before seeing the photo, Kaley revealed the backstory of this self-portrait. She said: “During Covid-19, my friend group, we were doing all these online games together, and a lot was Pictionary and charades.” She revealed that one of the games was a drawing game and they had to make a self-portrait of themselves. Oh well, she made an art out of her face, even though cartoonish. See for yourself, and be the judge.

How Did Kaley Meet Her Boyfriend, Tom Pelphrey? 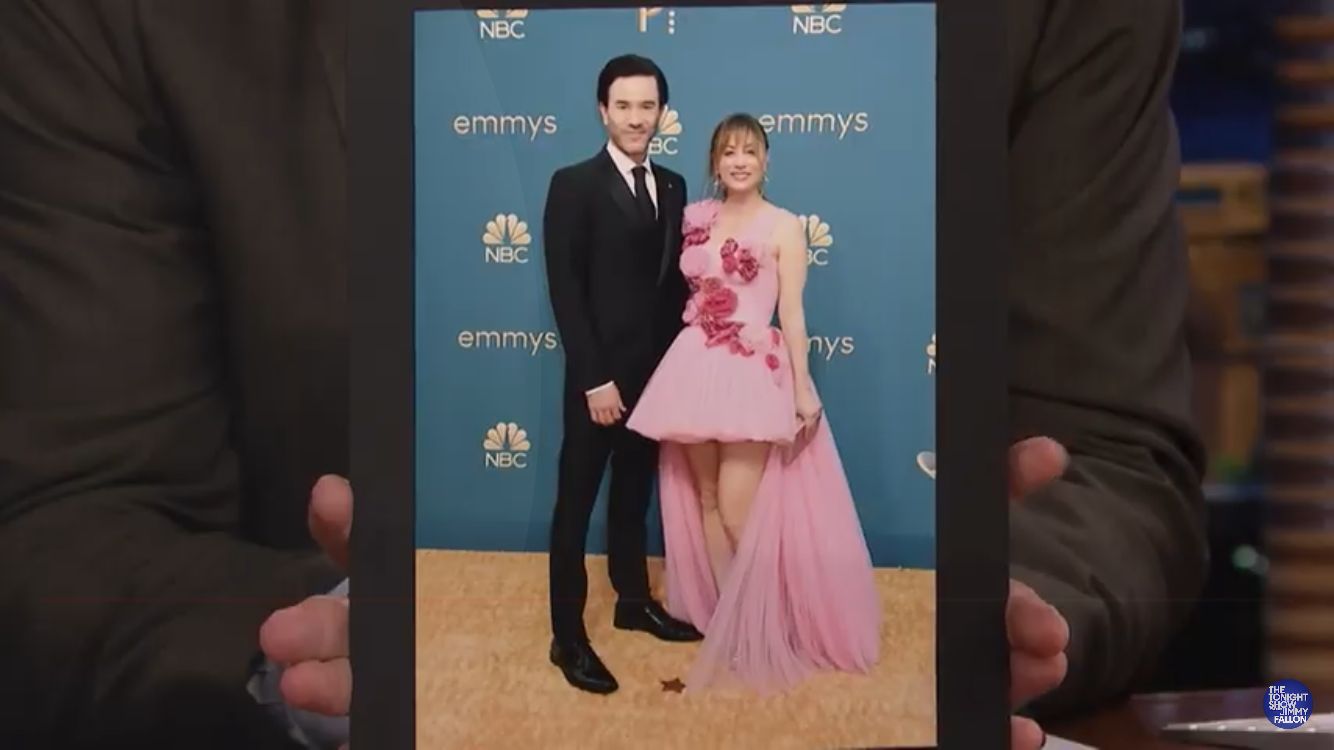 Continuing with the story, Kaley stated that she was shooting a film in Berlin, about nine months ago, and her manager was submitting different clients and asked her if she knew Tom. Cuoco added, “She goes with a side note, and single!” Kaley told her manager that she is not ready to date, don’t know who they were casting and don’t even know who Tom is.

Kaley shared this incident with her sister and asked her, “Do you know who is Tom Pelphrey?” And, her sister went nuts and said, “Ohhh…[Gasps] Have you seen Ozark?” And she was like, “No I haven’t.” She confessed that people lose their minds and go like, “How can you not see Ozark.” Well, not she’s got the name behind it.

She continued her story and said, “The months had gone on and we had never met.” During that time, Kaley was promoting “Flight Attendant” with her manager who is also Tom’s manager, and she was like: “Oh, I am going to the Ozark premiere tonight. Do you wanna come with me?” She confessed that it didn’t even occur to her and she was like, “Yeah, I’ll go.” 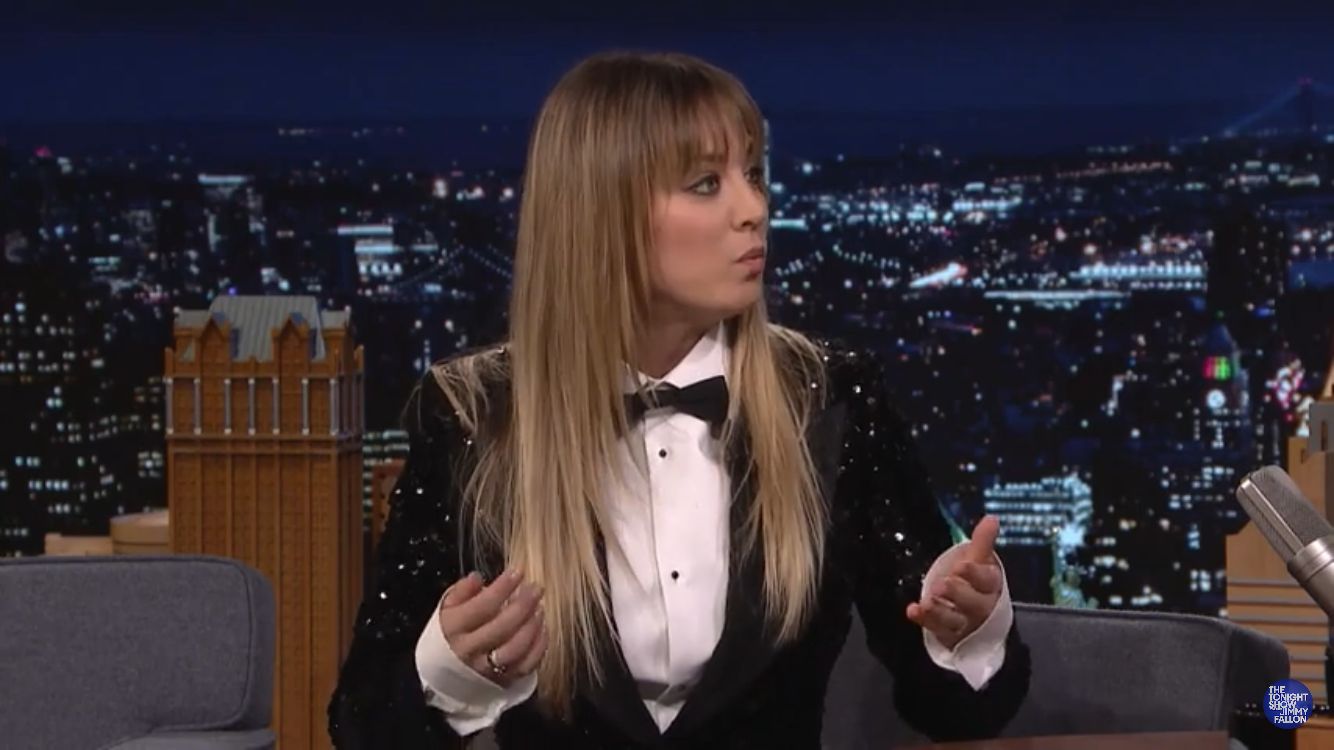 Kaley revealed that she got dressed up and went to the “Ozark” premiere. She was standing in the bathroom and waiting, she heard a voice and it was Tom. He said: “Where’s this Kaley?” Kaley responded: “Oh, where is Kaley!” and she turned around and played along. Well, at that moment, it was like love at first sight. For her, “The world stopped”.

Well, Kaley actually seems to be a lot happier around Tom Pemphrey. The “Flight Attendant” star confirmed their romance in May 2022 while sharing some cute snaps and captions on Instagram. FYI, Kaley is a two-time divorcee and her previous divorce from her ex-husband Karl Cook was rather rough.

A Bit About ‘Meet Cute’ And Pete… 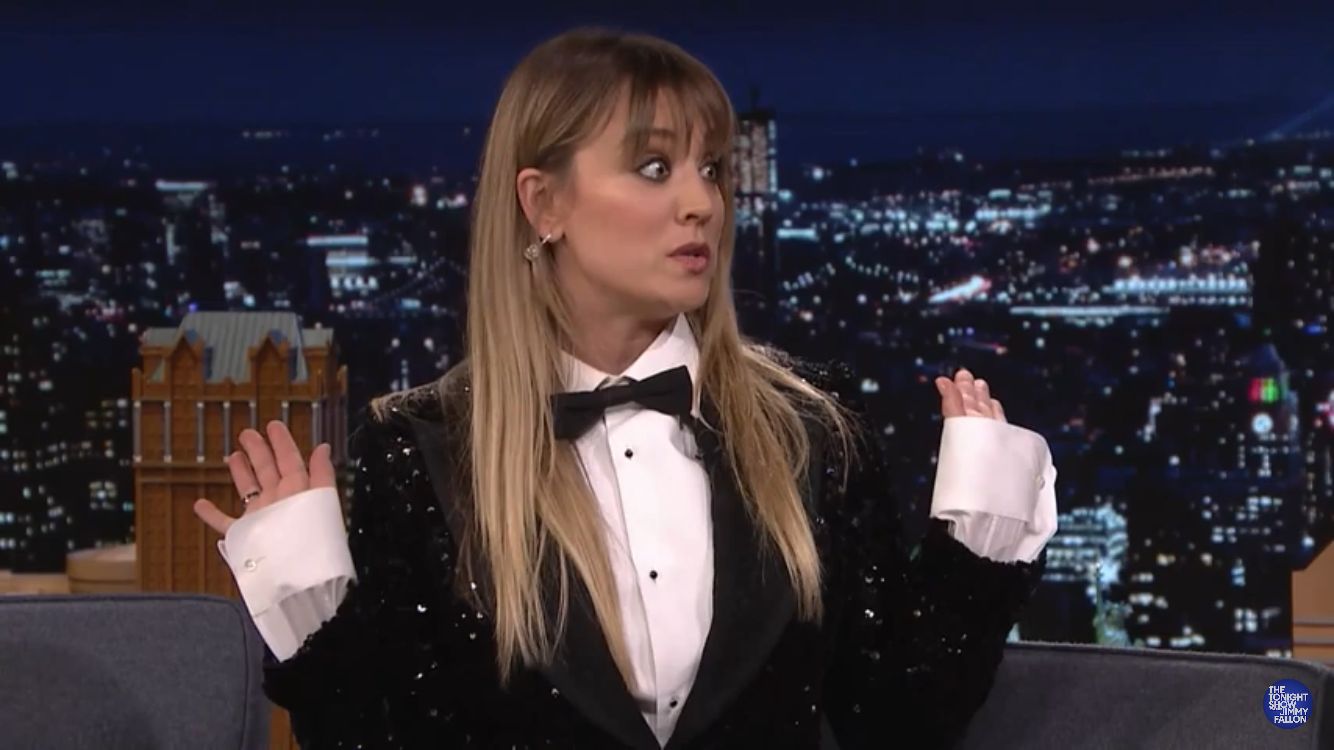 After sharing some laughs, Jimmy Fallon and Kaley talked about her movie “Meet Cute”, which is releasing on Sept. 21, 2022, on Netflix. Jimmy asked curiously, “Meet Cute… I only learnt about the term after  ‘Saturday Night Live’…is a term for, in a script when the two people, that the romantic leads meet. Kaley added, “It’s like an accident, like a cute way to meet.”

She continued, “So when I actually attached, everyone was like, you guys need to meet, we hope that there’s chemistry. She stated that she didn’t meet Pete before that. For the said reason, she got in contact with Pete when they were in L.A. She was like, “Maybe let’s meet for a coffee, let’s meet the director or something.” 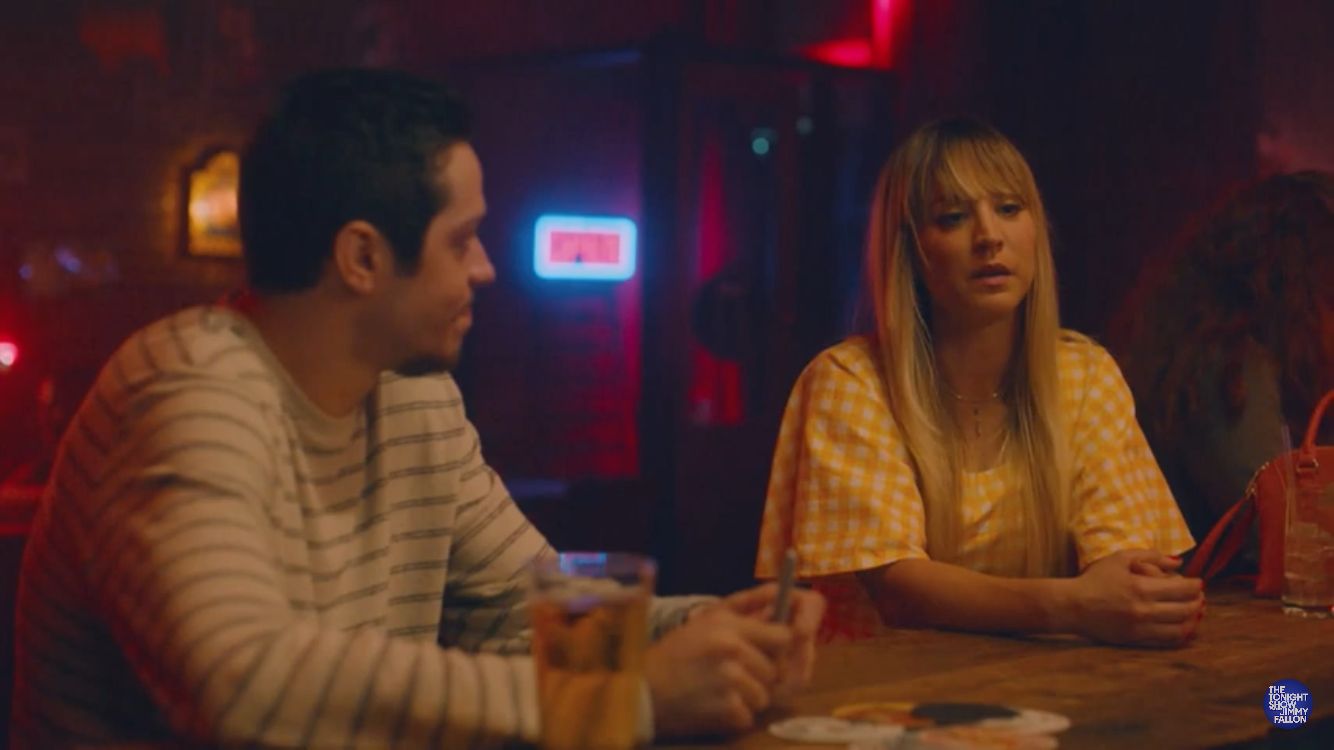 It turned out that Pete Davidson wanted to meet Kaley in an escape room. As Jimmy burst out, Kaley stated that she told Pete: “You know what Pete, not everyone has to end on TMZ. Why can’t anything be normal.” But again, she decided to meet Pete in the escape room along with the director. She concluded, “You really can learn a lot about someone in an escape room. 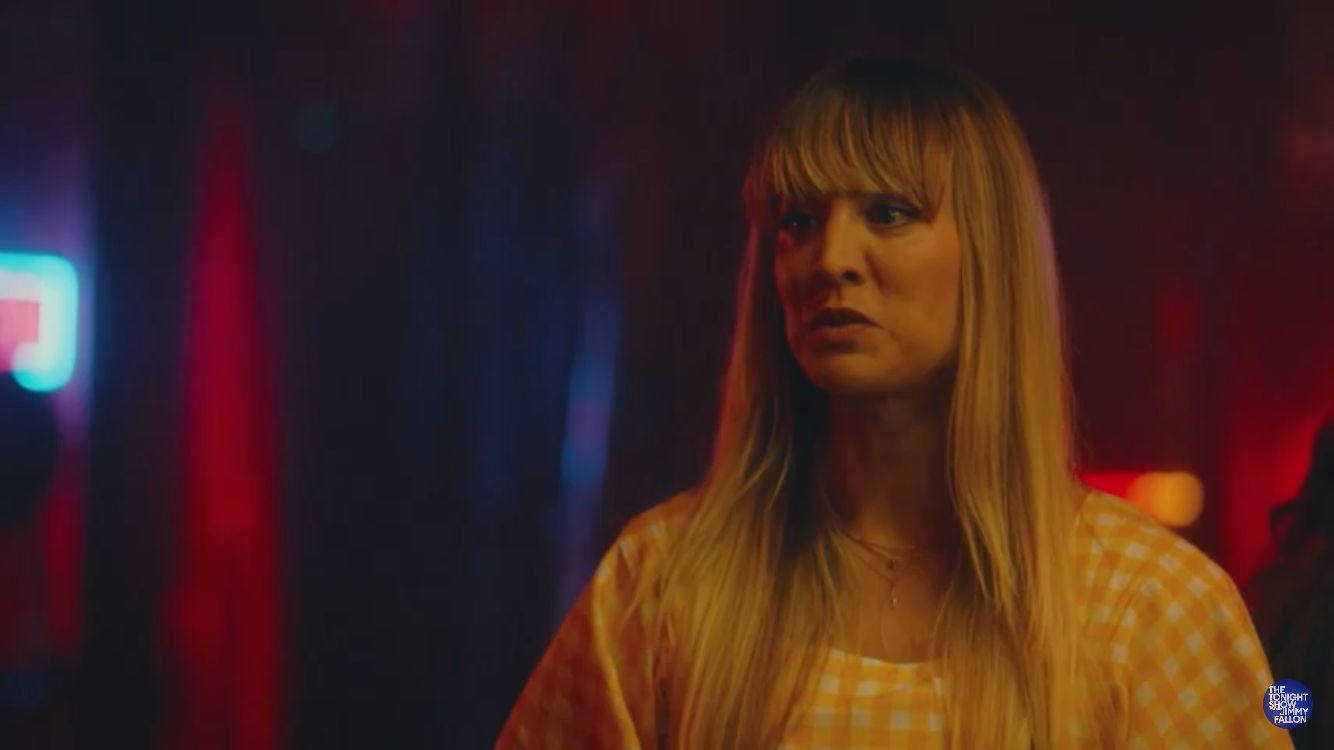 However, Kaley also revealed that she doesn’t enjoy escape rooms, she rather likes answers. “I don’t wanna know why there is a 6 on the ceiling and why it connects to the bike that opens the door,” she continued. She said that she hates that thing. Kaley shared that Pete laughs a lot. “I don’t even know what he’s laughing at,” she concluded. Well, he’s just a happy guy, so why not!

If you’re not aware, Meet Cute is a romantic comedy, directed by Alex Lehmann and is scheduled to release on September 21, 2022. The plot basically revolves around a Manhattan-native Sheila (Kaley) who “discovers a time machine in a nail salon and uses it to continually fix elements of a date she had the previous night.”