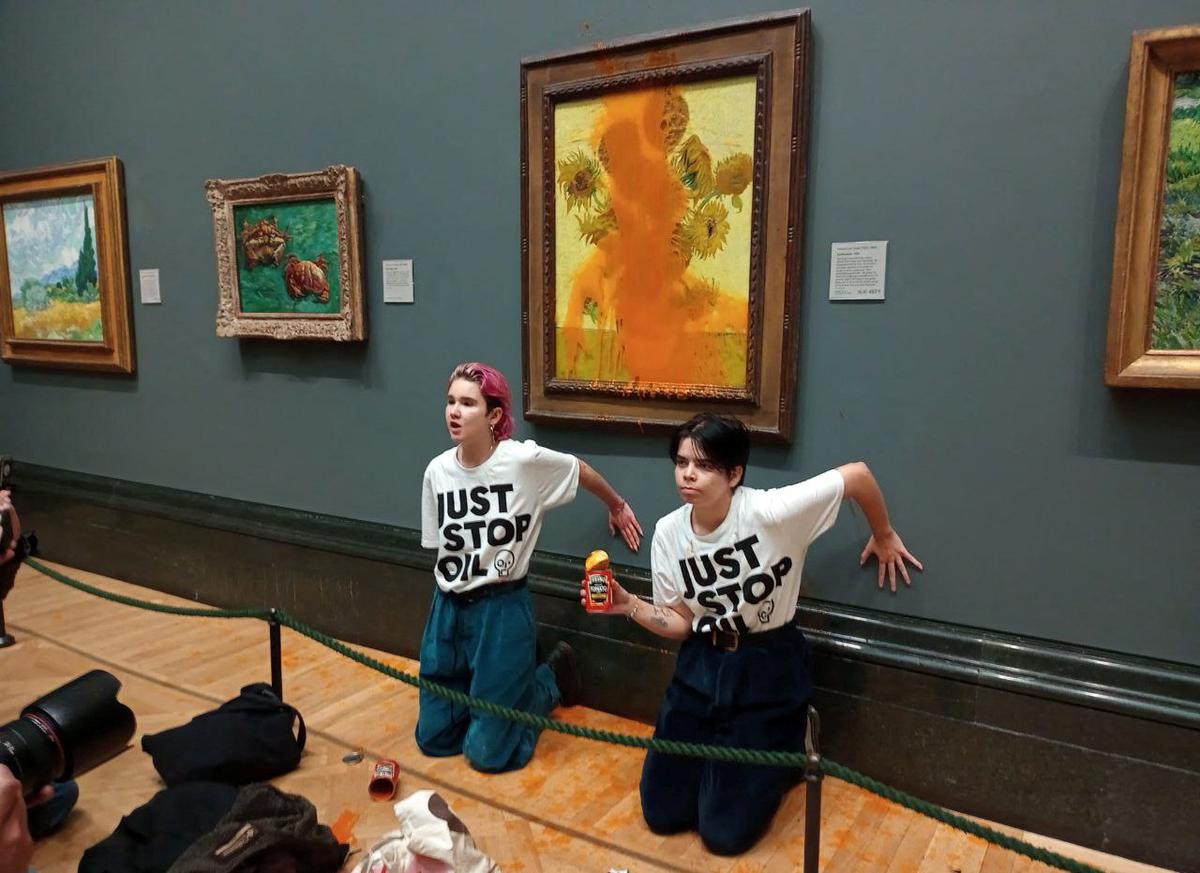 Vincent Willem Van Gogh, a famous Dutch post-impressionist painter, just rolled over in his grave as eco-activists from “Just Stop Oil” poured two cans of Heinz tomato soup over his iconic artwork, “Sunflowers” at London’s National Gallery today. As a part of their”direct-action” stunt targeting works of art, could have managed to spoilt this iconic artwork from the Dutch painter.

Per the London Metropolitan Police, two protestors have been arrested for criminal damage and aggravated trespass after they deliberately “threw a substance over a painting” at the gallery on Trafalgar Square and glued themselves to a wall just after 11 am (1000 GMT). The protestors were then taken to a central London police station.

The National Gallery, however, revealed that two “protestors” appeared to glue themselves to the wall adjacent to “Sunflowers” and threw a “red substance” at the painting. It was later identified as tomato soup. Visitors witnessed this act and called the police. Thankfully, no damage has been caused to the painting, but there is “minor damage” to the frame.

if you’re not aware, the painting’s estimated value is around $84.2 million. The National Gallery website stated that the painting was acquired by the gallery in 1924, and is one of the five versions on public displays across the world. The Dutch painter, who posthumously became one of the most famous and influential figures in the history of Western art, created seven such still-life paintings.

What’s In The Viral Video?

The vandalism or destruction of art is always an authoritarian act.

But more than that – it represents a repudiation of civilisation and the achievements of humanity.pic.twitter.com/8gLTjekvIt

The video, wherein two protestors pulled off this stunt, was posted on Twitter by Guardian’s environment correspondent Damien Gayle and was proudly re-tweeted by Just Stop Oil, showing two women wearing “Just Stop Oil” slogan t-shirts and lobbing cans of tomato soup on the artwork from 1887.

In the viral video, one can hear the glued protestor shouting: “What is worth more, art or life? “Are you more concerned about the protection of a painting or the protection of our planet and people?” A visitor can also be heard yelling “oh my God” as the soup went on the canvas.

In their defense, the group released a statement that they aim to demand the UK government halt all new oil and gas projects, and they have taken full responsibility for their action. “Just Stop Oil” also posted another tweet: “Choose life over art” Human creativity and brilliance are on show in this gallery, yet our heritage is being destroyed by our Government’s failure to act on the climate and cost of living crisis. Well, this is not the first time that “Just Stop Oil” has targeted artworks in museums. In July, some activists glued themselves to “The Last Supper” Leonardo da Vinci’s famous artwork at the Royal Academy of Art.

Previously, they even blocked bridges and intersections across London to garner attention toward the British government’s new licensing round for North Sea old and gas exploration, a step condemned by many environmentalists due to their concerns over “climate change”. Protest is okay, but destroying iconic artwork is a bit too much. What do you think? And hey, where is Greta Thunberg these days, now that we talk of climate change?