Jurnee Smollett Is In Awe Of Allison Janney’s Action-Star Role In “Lou”, Kicking Bu** At 62

American actress Jurnee Smollett’s Eve’s Bayou (1997) turns 25! On her appearance on “The Kelly Clarkson Show”, Jurnee couldn’t stop praising her co-star Allison Janney and spoke about how she’s kicking ass with her “full-on-action” star performance at 62. She also revealed the “tough filming conditions” they faced while shooting her new Netflix movie Lou.

Progressing As A Black Woman… 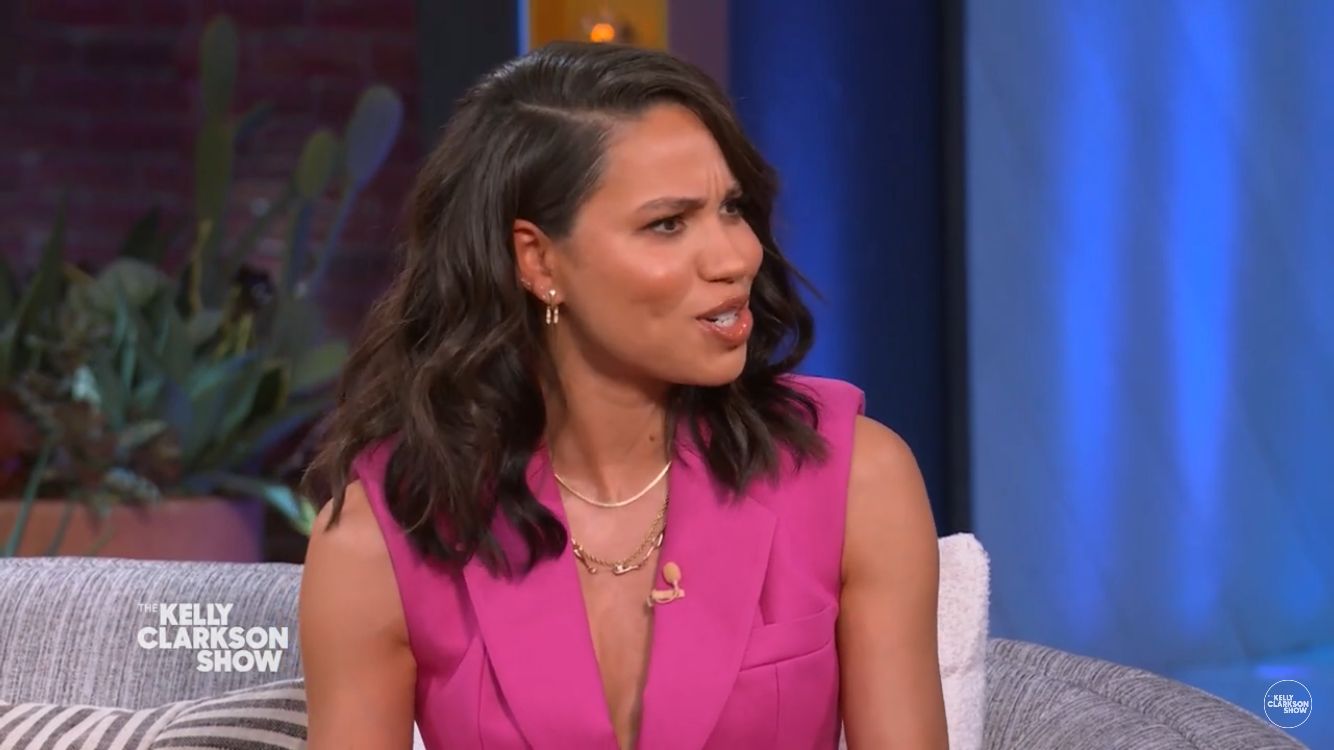 Kelly Clarkson congratulated Jurnee Smollett for her 1997 movie Eve’s Bayou, which turns 25 this year. When asked about “how things have progressed for black women in film, in front of the camera and behind,” Jurnee responded, “I think the truth of the matter is that I am encouraged because there are so many more of us.”

Here, she was referring to the executive producers, producers, writers and directors who are “ushering forward stories that aren’t typically, pushed forward by a white male”. Therefore, she’s excited because there are so many voices to be excited about. She added, “So many people are not waiting to be invited at the table. They are building their own table.” Well said, Jurnee, well said. 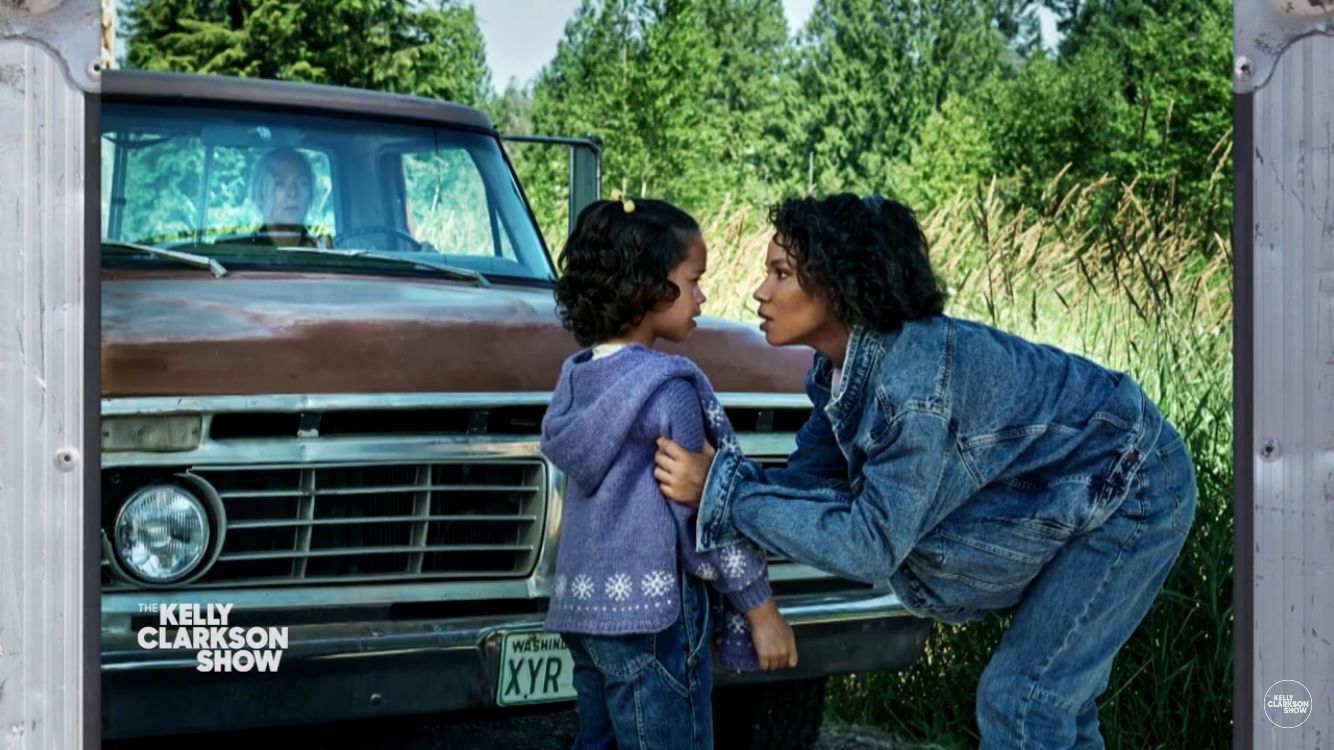 While pushing the conversation toward Jurnee Smollett’s new Netflix movie, “Lou”, Kelly asked, “The weather plays a kind of character in it, right?” Jurnee replied, “Oh yea,” and explained that the entire film takes place in a storm. Kelly asked, “How fun was that filming?”

Jurnee revealed that she is that kind of a weird person, that’s like “Oh it’s raining and we’re in blood, mud and sweat, this is my kinda movie”. However, she revealed that it was a bit too much to be wet all the time, because one is uncomfortable, muddy and it’s very disgusting. But then, in a way, it’s fun.

FYI, “Lou” is an upcoming action thriller which will be released on Netflix on September 23, 2022. The cast includes stars like Allison Janney, Jurnee, Logan Marshall-Green, Matt Craven and Ridley Bateman. The action-thriller is directed by Anna Foerster, who made her feature-film directing debut with “Underworld: Blood Wars”. 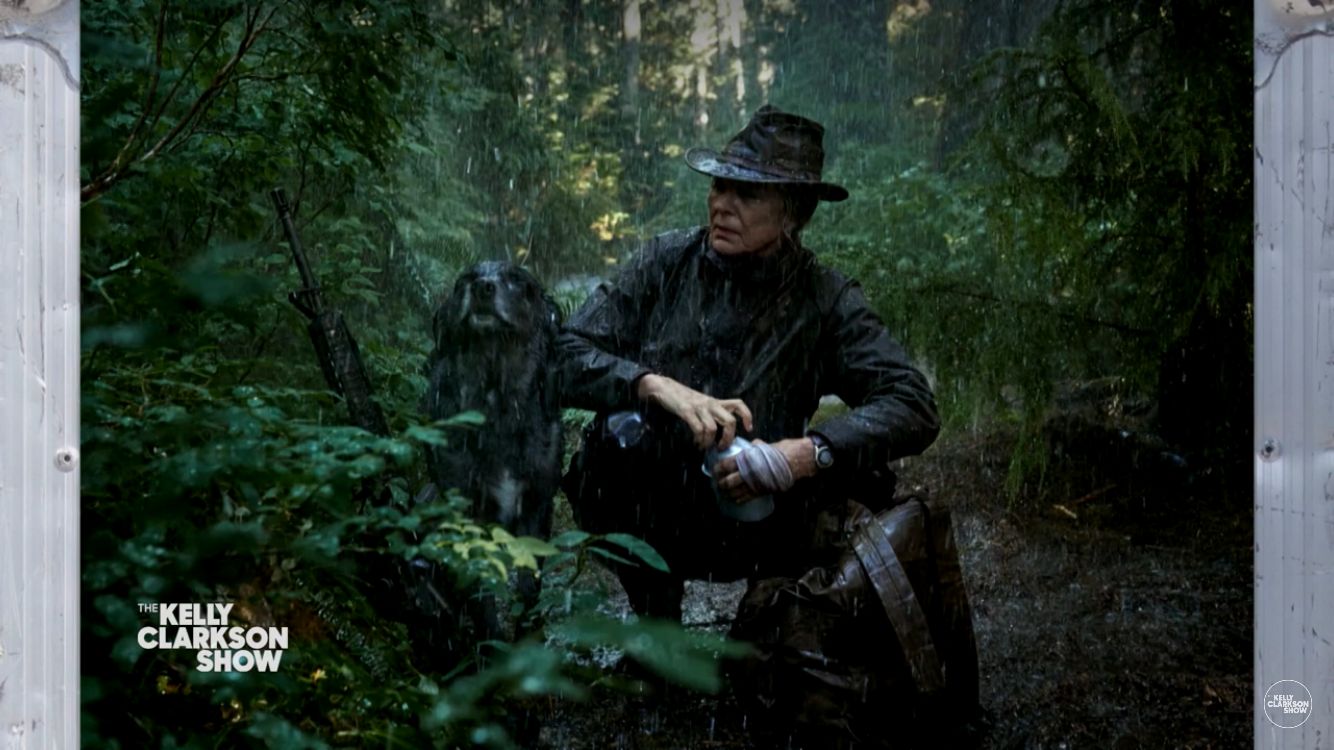 When asked, “Was it cool working with Allison Janney, Jurnee couldn’t stop praising the 62-year-old actress who never fails to astonish us with her action movies. At 62, the rock-solid actress whose career spans over three decades, is kicking a****. Calling her an icon and a legend, Jurnee revealed that her favourite part about working with her was just watching her do something she’s never done before.

In Jurnee’s words, Allison Janey went full-on action-star in this movie and at 62, she can be seen wearing this long, beautiful silver hair, and she’s kicking b***. She continued, “…And I am so excited for people to see that representation. Kelly interrupted and said, “It’s a different kind of role for her.” Jurnee argued it may be a different kind of role for her but we don’t get to see mature women of that age, you know kicking bu**.

Now, if you don’t know this, the Academy-Award winner is mostly known for her roles in genres like comedy and drama. Allison Janney is a fine actress who has given us some of the greatest blockbusters through the 80s. The Golden Globe Award-winner is not tired of acting and would very much be seen the next year in movies like the science-fiction drama “True Love”. 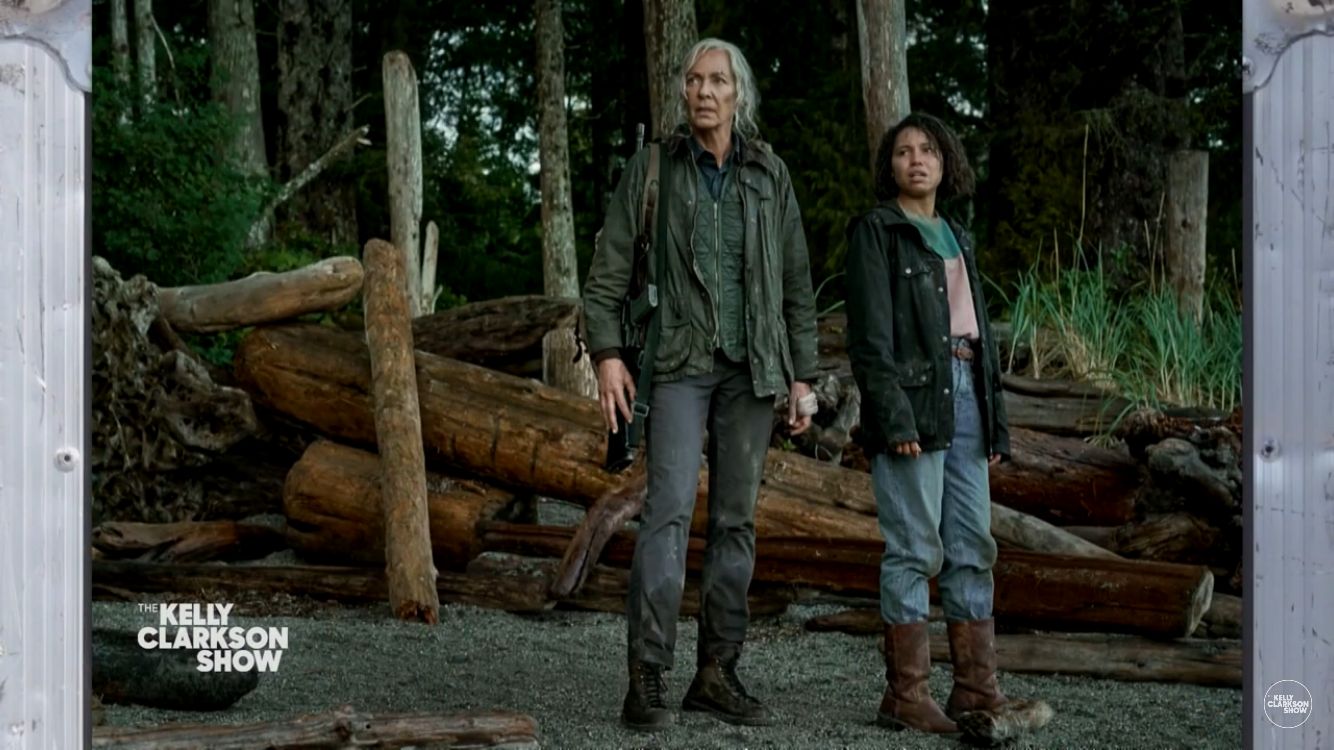 Kelly joked, “Tell everyone what the movie is about other than being in a storm. It looks like your kid has been taken.” Jurnee Smollett replied, “Yea, so my kid’s been kidnapped and I enlist the help of my neighbour who is kind of this grumpy woman who doesn’t like me.” Together, they go on this rescue mission to get her child back in the middle of the storm.

She explained further that the two are forced to work together. She said, “We’re two women who don’t like each other, come from very different backgrounds, and through this rescue mission, are forced to kind of gain a deeper understanding and respect for each other.” 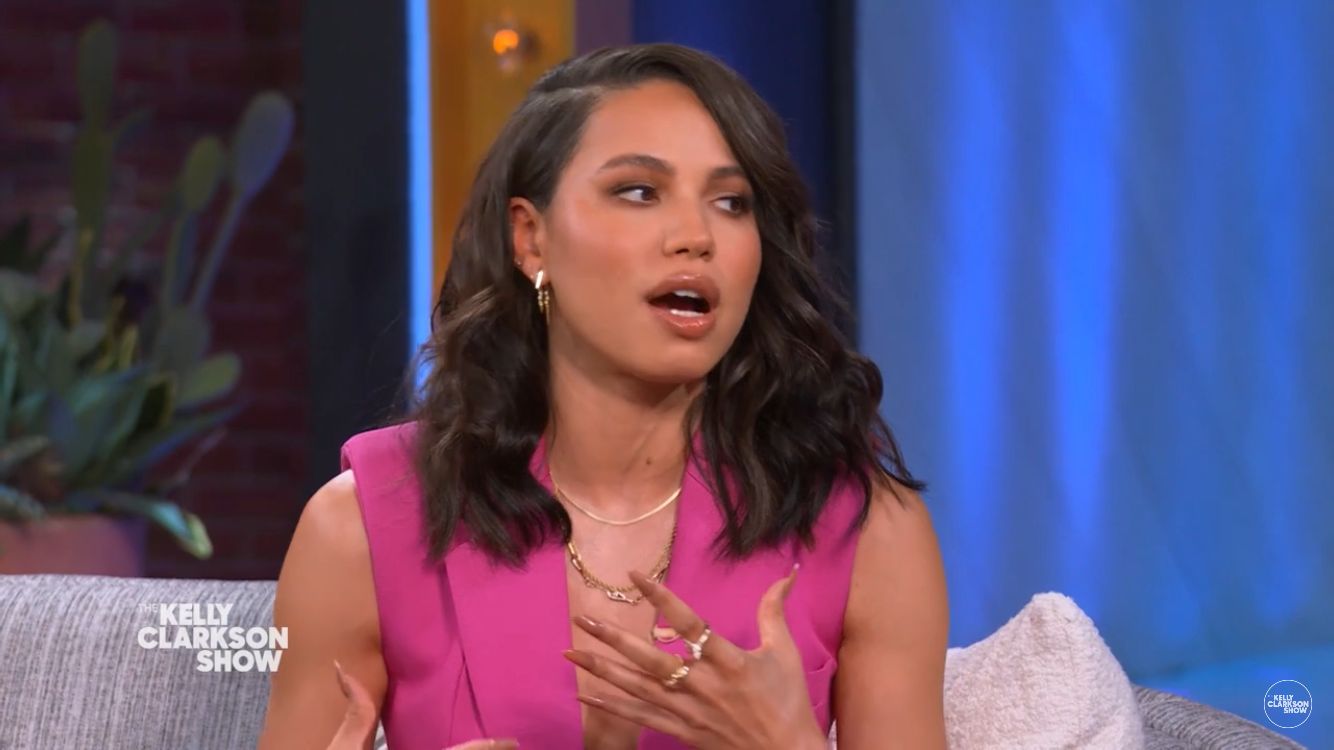 Kelly lost a bit in the plot and said, “That is my worst nightmare. You kid getting taken. Like, is that hard into those roles that, if that happened in real life, that’s devastating?” Jurnee, who plays the mother of the kidnapped child in this movie, responded: The thing is it’s a very dark place to go to as an actor. But I don’t know for me, I feel like you gotta sacrifice something at the altar.

She confessed that she prefers to take on those roles that are challenging, which pushes her and forces her to go to those really uncomfortable parts of her mind. However, she stated that a film like “Lou” comes as a very empowering movie. She said, “…And so, it was a lot about tapping into that mama bear strength, that primal parts of our brain where it’s like, if you mess with my child, I am coming for you.”

As for this movie, it wasn’t like living in the darkness, for Jurnee, it was actually about living in that power and that strength of being a mother. Kelly rightfully said, “Another optimist, look at that.” With that, Jurnee spoke verses about her personality and how special this movie is for both, Janney and Jurnee. See it for yourself on September 23!