The mangaka meta-commentary runs wild in Jujutsu Kaisen Chapter 182 as a new character is introduced, who might just be Gege Akutami himself. 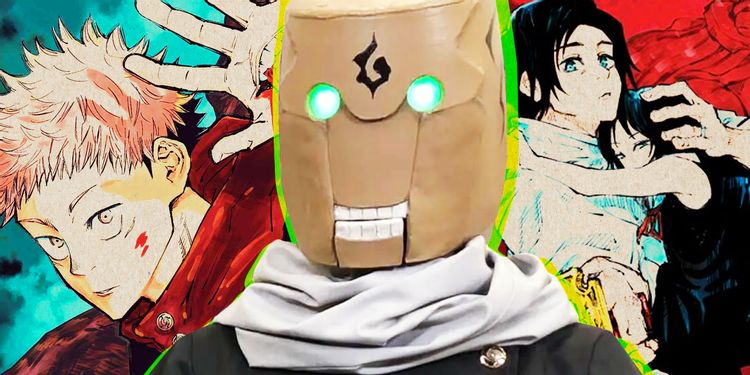 We’re finally moving on from Sendai Colony to Tokyo No. 2 with a new character introduced who looks a lot more interesting than the surface level.

Where to Read Jujutsu Kaisen Chapter 182?

Climb onboard into the story of Jujutsu Kaisen as it gets more and more interesting with every single chapter, involving meta-commentary and think pieces into the culling game.

You can catch up on the recent release of the Jujutsu Kaisen manga on the official Viz Media website and await the next chapter when it drops on 22nd April 2022.

Meta-Commentary About Shueisha and Manga Industry

The creator of Jujutsu Kaisen, Gege Akutami is a person shrouded with mystery. With their gender, age and real name, all hidden. As they hid behind a Mechamaru cosplay for the live television interview. Gege has never revealed or shown any interest in revealing their personal life to the public of Japan.

The recent release of Jujutsu Kaisen has confused the fanbase even more. The chapter starts with a mangaka trying to get his manga published in the Shueisha’s Shonen Jump magazine.

The odd thing about the conversation, apart from it being confirmed that Shueisha and Shonen Jump exists in this universe, is that the author of said manga is a foreigner who later tells the manager that he’s French by birth but born and raised in Japan.

The whole conversation seems very bizarre as we have never seen a shounen manga involve a mangaka in the manga. Let alone when they have kept everything about them a mystery from the general public. 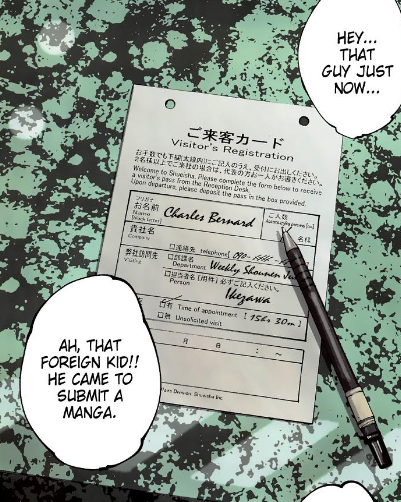 It is fascinating to wonder if the Jujutsu Kaisen mangaka, Gege might be French or a foreigner. But speculations like these discourage creators like Gege from involving such bizarre ideas in the story.

The chapter follows Charles Bernard, who is a big fan of the manga world and aspires to release his manga. But he is softly rejected as his work is hanging on the lines of plagiarism and might be suited for a more adult demographic. Not to mention that the manager despises the unreal bending of one character’s finger.

Charles gets very angry and sad about the fact that his manga couldn’t be published and lashes on the manager. Back in today’s time, we see that Charles is on a Ferris wheel with another guy. 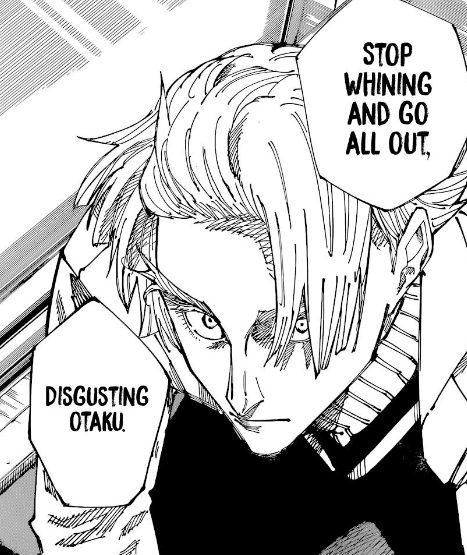 They are talking about how the culling game would forever change the whole world, a smart commentary about the conversations happening in the real world about the worldwide pandemic.

Charles tells the other guy that for him to involve himself in the culling game, he needs a justifiable reason, just like a hero needs in a shounen manga. One thing leads to another, and the guy calls Charles a disgusting otaku, which we all know is enough to go on a raging killing spree.

Okkotsu Comes Out on Top

Also, in the continuation of the last chapter, we see Okkotsu talking to Ishigoori about the way that he is lenient towards his enemy, as he spares Ishigoori and Uro in exchange for their points. 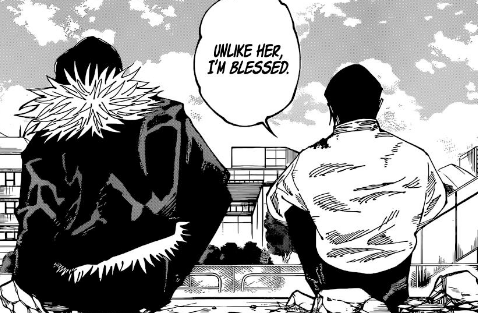 Now, Okktosu has over 200 points, making him the highest-ranked in the Sendai Colony as well as in the whole culling game.

It will be so exciting to see what path Charles goes to, and what his original plan concerning the culling game is. All in all the previous chapter packed a lot of great meta-commentary that seemed to add some different flavours to the manga.