The 19-year old American dancer, singer and YouTuber JoJo Siwa appeared on The Tonight Show starring Jimmy Fallon yesterday on her “Golden Birthday”. She also revealed her desire to be Lady Gaga’s backup dancer among other things. Read on to know more about her appearance on the show. 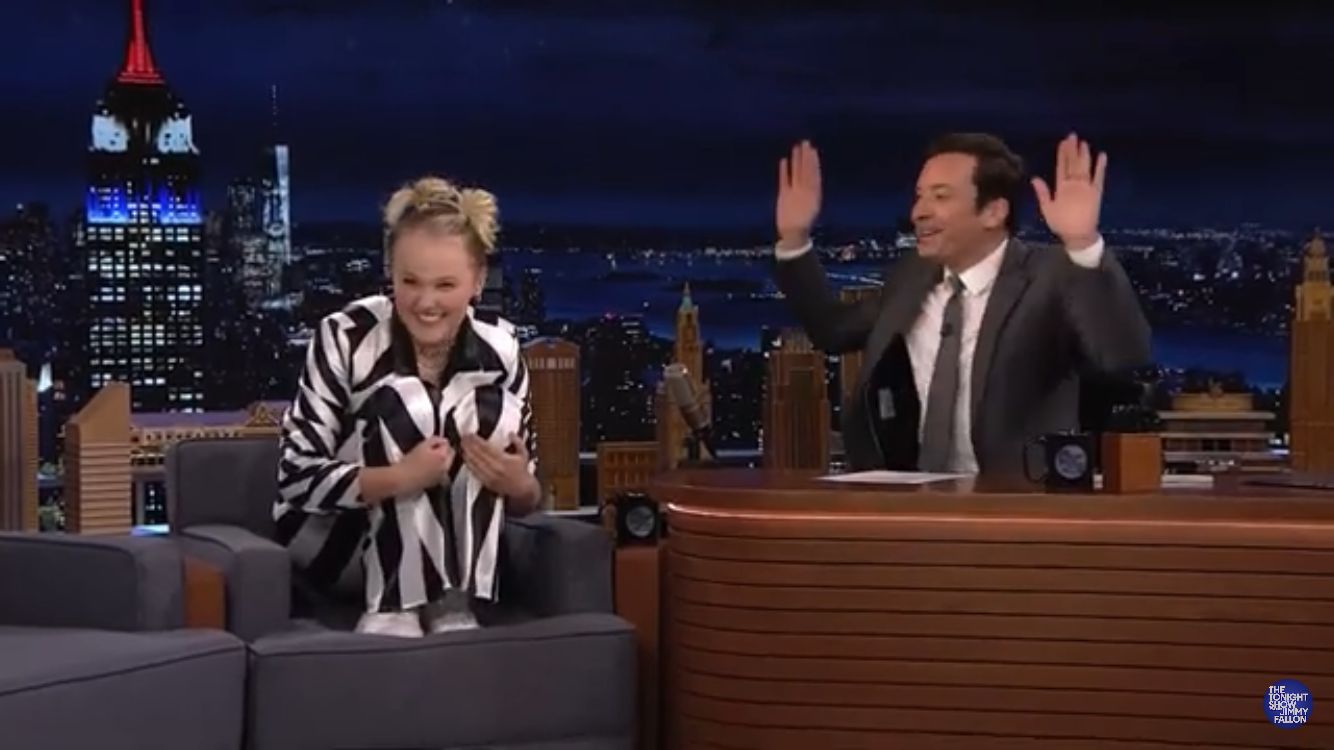 Joelle Joanie “JoJo” Siwa appeared on The Tonight Show starring Jimmy Fallon yesterday and celebrated her “Golden Birthday”. As Jimmy wished her a happy birthday, the “Boomerang”  singer revealed that it was her 19th birthday on the 19th, making it a “Golden Birthday”.

Jimmy said with awe that “This only happens once in your lifetime!” Jimmy then wished her a Happy Golden Birthday. Jimmy also sang the classic birthday song for JoJo and the audience joined him too. An excited JoJo almost got on her chair. JoJo revealed that celebrating her birthday on the show is the coolest thing that has happened to her. 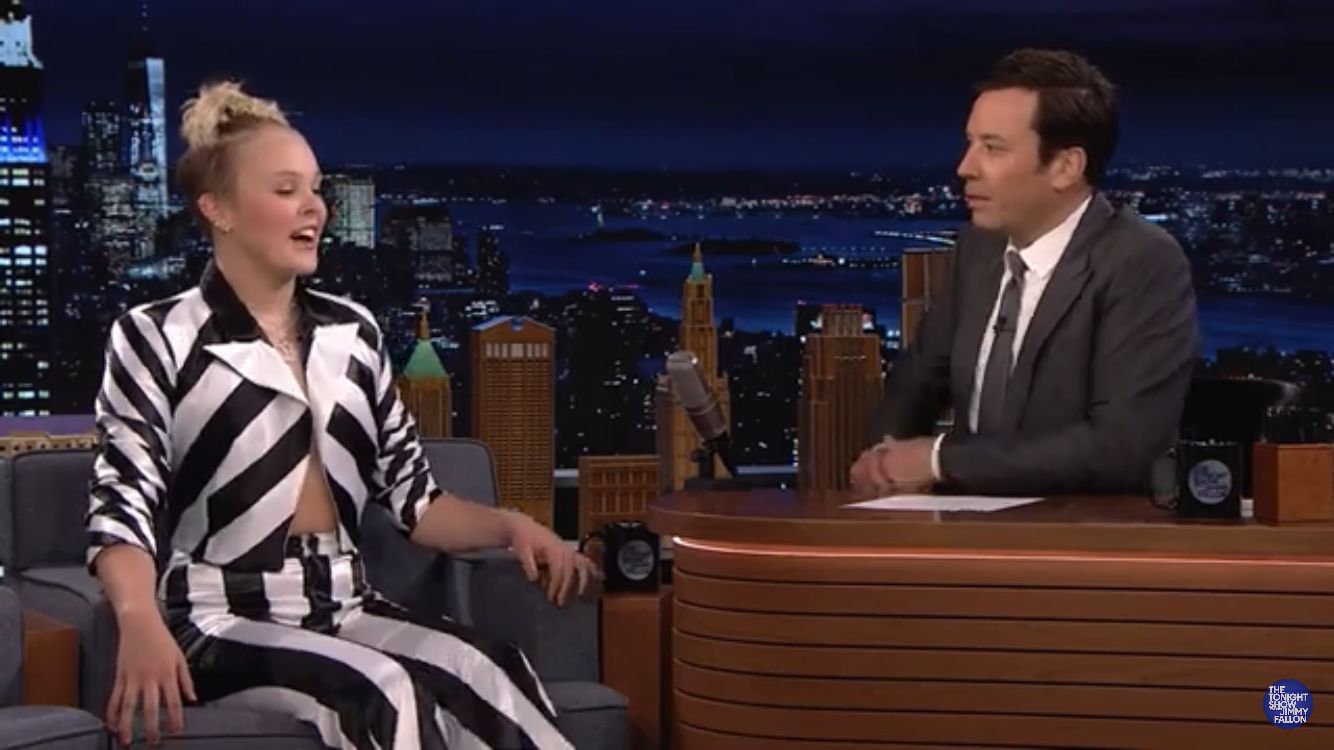 Under Time’s 100 Most Influential People 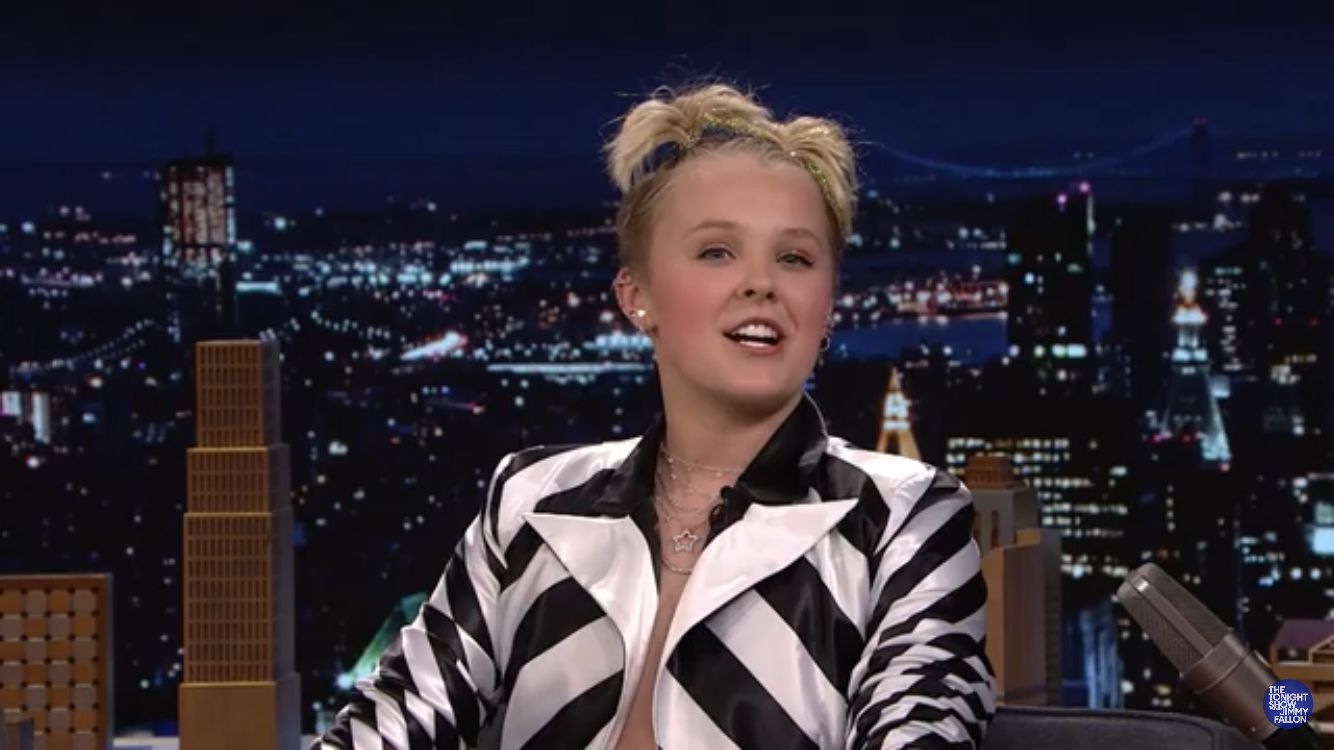 Jimmy Fallon furthered the conversation by reading some proud facts about JoJo. He stated that JoJo has accomplished so much at a young age. She was included on Time‘s annual list of the 100 most influential people in the world in 2020.

Jimmy stated, “Boomerang has almost 1 billion views on YouTube.” JoJo added, “A billion. And it just had its sixth anniversary, too.” JoJo revealed that the song still gets around 500,000 views a day. She said that for little kids who are two years old, their favourite song is Boomerang, and it’s just crazy.

A Desire related to Lady Gaga

Jimmy Fallon reminded JoJo Siwa about something that she hasn’t done yet, and it involves Lady Gaga. JoJo revealed her true love for Lady Gaga and conveyed that her dream is either to play Lady Gaga in a biopic and if that doesn’t happen, be a backup dancer for her for just one day.

Siwa revealed that the two have the same choreographer, Richie Jackson and she keeps telling him all the time because Siwa knows about 20-24 Lady Gaga dances, she does at her concerts.

She stated, “I tell Richie all the time, I am like one day, a dancer’s gonna be sick, they are not gonna be on stage, you’re gonna have one hour to find someone who knows the whole set, and you’re gonna call me, and I am gonna be prepared” Atta Girl! That’s some real confidence there.

Jimmy said Lady Gaga watches this show all the time and requested her to consider JoJo’s dream. He said, “Come on, don’t stop a dream.” JoJo revealed that Gaga is touring right as Chromatica Ball is about to start. Jimmy said, “Let’s send some vibes, it’s gonna happen, it’s your Golden Birthday.”

JoJo is an Honest Judge on “SYTYCD” 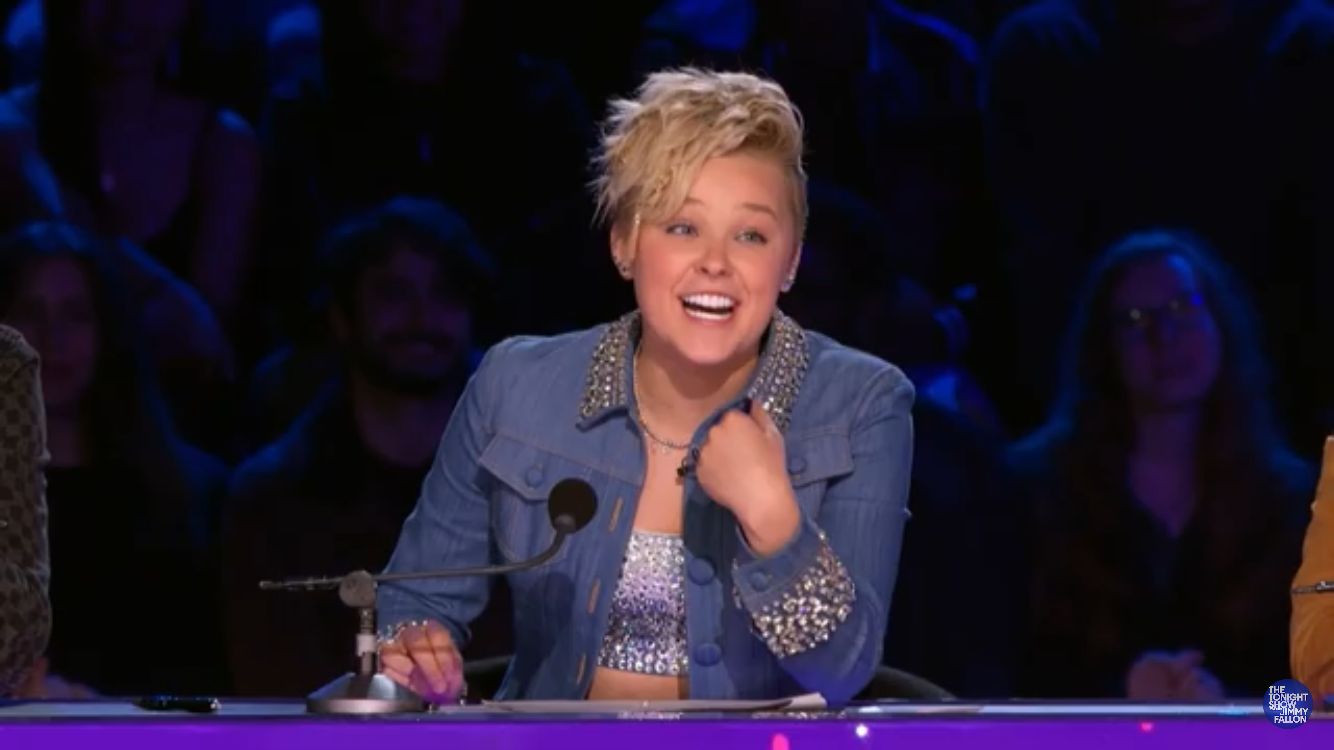 On April 4, 2022, she was announced as a judge for the seventeenth season of So You Think You Can Dance, along with Matthew Morrison and Stephen “tWitch” Boss. Jimmy asked her about the show as Season 17 premiered on May 18th. JoJo revealed that the show came out a year after she was born. She said, “I remember going for a tour when I was like 5, and I met the cast of that season. It was Season 5.”

JoJo stated that it’s so cool to think that this show is such an iconic piece of the dance world and dance history. She added, “Every dancer that has such a household name, was born on this show.” She revealed that to be a part of this show as a judge is something incredible.

Jimmy asked, “Do the dancers get nervous when they dance in front of you? JoJo said, “They get terrified. It’s funny to be on the judge’s side.” She revealed that she was a contestant on shows like ” Dancing with the Stars”, “Masked Singer” and “Ultimate Dance Competition”, and she had her fair share of eliminated shows. She meant she has been on the other side too.

Jimmy asked JoJo about how she is as a judge. The “Kid in a Candy Store” singer but JoJo asked him what he thinks about it. Jimmy stated that “I think you’re always positive when I am around you. So I would say, you always give positive feedback.” JoJo said that she is an honest judge and won’t hold back anything.

JoJo revealed that she wants people to know that she is dead serious when they are good. JoJo won’t tell everyone that they are great. She revealed it’s a natural trait. Jimmy then played a clip of the birthday girl from the “So You Think You Can Dance” premiere. 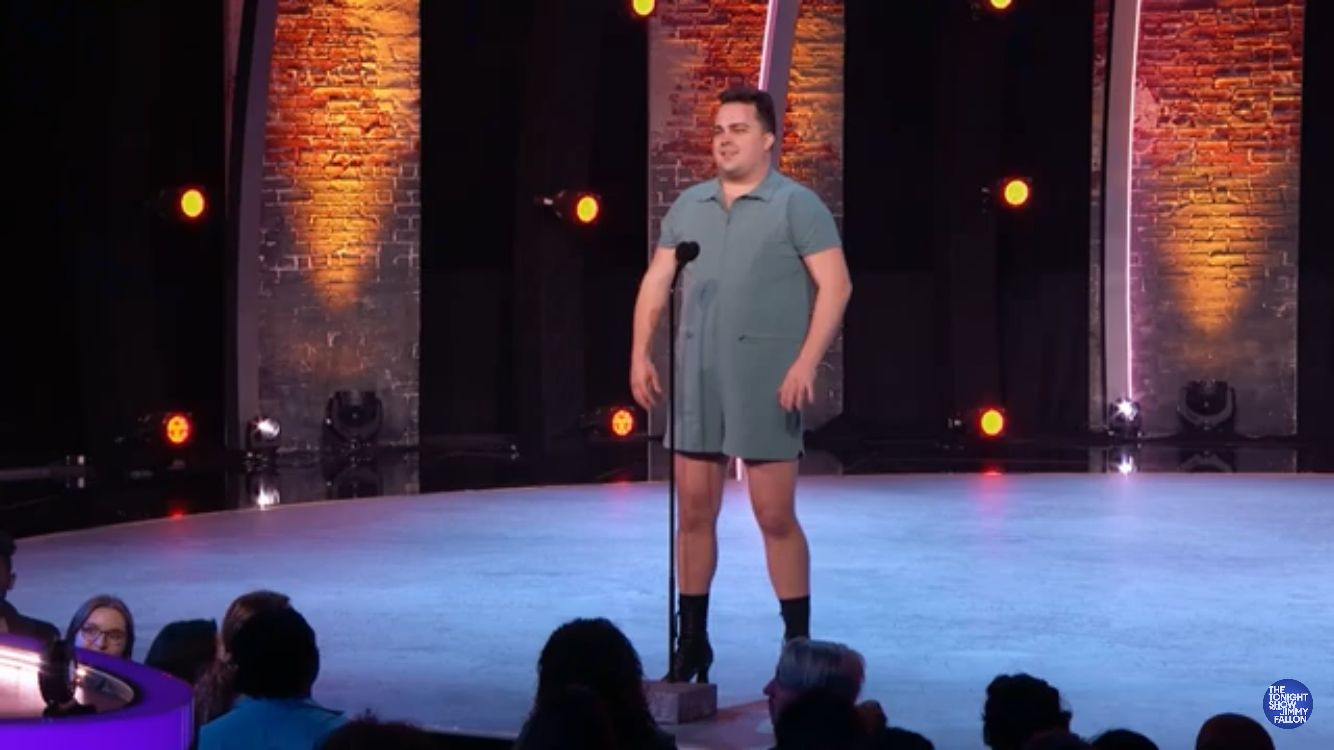 In the clip, JoJo can be seen judging a contestant and saying, “Out of everyone that I have seen today, you had the most fun on this stage and that is something I really appreciate. I love that you’re who you are and you are out here in heels and your little shorts.” She added that she is very gay too and encouraged the contestant to do whatever he wants to.

FYI, Siwa does not label her sexuality, as she “doesn’t know this answer”. In February 2021, Siwa revealed that she was in a relationship with her best friend, Kylie Prew,  who had asked her to be her girlfriend a month prior.

JoJo later stated “Technically I would say that I am pansexual, because that’s how I have always been my whole life is just like, “my human is my human.” In the same interview, Siwa mentioned that she also uses the terms “gay” and “queer”. Now, she confessed on “So You Think You Can Dance” that she is somewhat gay! What do you think about this gorgeous human?