Joseph Pera, best known as the creator and star of Adult Swim’s Joe Pera Talks with You, appeared on Late Night With Seth Meyers and shares the big news about being the next James Bond. Read on to know how what Joe Pera has done on the “Property On M&M”. Joe Pera appeared on Late Night With Seth Meyers, Wednesday (July 20) and was asked by Seth about what’s lined up next following Joe Pera Talks With You, ending after three seasons. In his response, Pera revealed the big news by saying,  “Just the following week, I got a phone call,” he said. “They asked me to be the next James Bond.” It’s a different direction for 007. Instead of being a British sex fiend, Bond will now be a “celibate American.”

Bond now “lives in Philadelphia, he eats pre-wrapped Boar’s Head sandwiches for breakfast and lunch, he’s learning to play the guitar off of YouTube, and he’s very afraid of dogs,” Pera said. He gives the Bond folks “a lot of credit for trying to refresh this… They’re taking a risk, but I don’t see how it doesn’t work out.” Pera also debuted the first clip from the upcoming movie. I already like it more than Spectre.

When asked if he has shot anything yet, Joe replied, “It’s funny you ask, because we actually–they actually wanted me to show the first clip. Seth asked, “Is this like a teaser clip?” Joe replied, “Yea, it was very early on in filming–hopefully it doesn’t give too much away. But this is from the–James Bond is on his first mission. Seth asked, “Is that all we need to know?”

Joe replied, “Pretty much”. Seth played the much-awaited clip by stating that “This is I guess, the first look at Joe Pera as the new James Bond. Here’s a clip of him on his first mission. And you won’t believe, that the clip contains Joe Pera running in his loose shirt and pants across the street as a car passes by.

A confused Seth asked him, “I end up with more questions than answers, I feel like. But–so it seemed like that started with a man spitting out. Joe replied, “yea, we were shooting and he just pulled into the camera and spit something. And you know, sometimes the part of filmmaking is embracing imperfections, so we decided to keep it in. So yea, part of the new angle of the James Bond, too.”

Speaking about the James Bond set, Seth stated that he has always imagined it really being locked down and not being a situation where a guy could just sort of drive through the set. Joe answered, “We’ve actually put an ad on Craiglist that says, Drive through if you feel like.” Seth asked, “Do you have any more? I mean the appetite is obviously whetted here.” Joe replied, “yea, there is another one from kind of the middle of the movie.” Joe said it might be hard to figure out what’s going on but I think–I think, you’ll, I think it’ll make sense when you play it.” In this clip, Joe was seen rolling a litter bag while walking through the sidewalk and ended up throwing it.

Seth laughed and asked, “I don’t know what’s going on here.” Joe revealed that this is a scene when James Bond gets pissed off that people are littering faster than he can pick it up. Seth says, “He seems like a broken man in the end.” He ends up littering with the bag of litter.

When asked about the title of the movie, Joe Pera revealed that “The working title is James Bond!, with an exclamation point afterwards.” Pera couldn’t hold laughter at his own jokes. Seth made sense by saying, “Yea, so let the people know that it is more exciting that the James Bond you’re used to.” 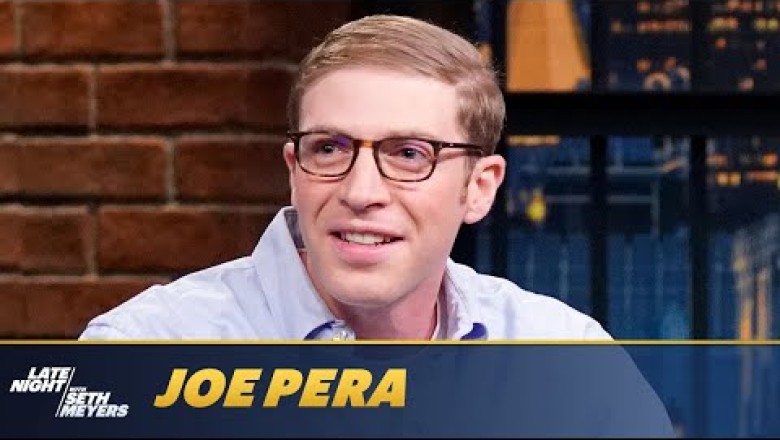 In the last scene, Joe as James Bond was seen eating a pizza and looking out of the window. Joe explained the scene by saying, “So I didn’t want to do this–the writers–I wasn’t going to do it at first, but then the writers said there was character development shown by, in the end, he decides, that he wants to get the chicken, rice and beans from a lunch takeout down the street as opposed to eating a prepackaged sandwich again.”

Seth stated, “It’s neat to see him in a baseball hat. I feel like you rarely see James Bond, any of the previous James Bond–Did you have a favourite actor before you, obviously, did you have a favourite actor who played James Bond.” Joe said, “They’re all so good.” Seth said, “I don’t know, but there’s certainly a way Bond talks,” and wondered that all the clips were absent of dialogue.

Seth then asked, “Do you in the body of this, do you actually speak and have some of those Bondy-type lines? Joe said, “Yea, we’re working on the classic lines right now. Everybody knows some of them, but yea. I was doing–working on the one scene where I do the big line.” He then pulled out two sheets and gave one to Seth Meyers, who plays the role of bartender. Here is the role play:

Seth Meyers (Bartender): Here is your IPA. What is your name?

Joe Pera: My name is James Bond, What is your name?  (that’s the plainest James Bond intro ever)

Joe: What are you doing in Philadelphia

As their conversation ended, Seth Meyers said he is starting to get worried about the new James Bond. Joe joked the only way it could fail is that we don’t get Pete to play himself. When asked about the budget for the movie, Joe said that why we’re trying to get Pete in the movie, is that he’d divert some transportation funds. How do you like the sketch and the new James Bond, eh?