The Spider-Man: No Way Home star Jamie Foxx has a new woman in his life. The Hollywood actor was recently spotted getting cozy with a mystery woman on a yacht in the South of France. Keep scrolling to catch a glimpse of the two lovebirds. All about Jamie and his mystery women’s recent outing

Jamie Foxx is having the time of his life at the moment. This weekend, he was spotted packing on the PDA with a mystery blonde at a luxury yacht under the French sunshine.

The pair was also seen giggling while boating over the weekend. In the photos that have emerged online, Jamie can be seen wearing a white tee and shorts. He topped his outfit with a cap and a pair of blue sunglasses. Soon afterward, the couple hopped on a jet ski in the water. The woman opted for a bright red two-piece with black shorts over the bottom. She also wore a pair of black sunglasses. She tightly held onto Jamie as he drove around the sea.

Jamie has been sharing pictures and videos from his recent getaway on the social media platform Instagram. As of now, he has dropped snaps of luxurious seafood meals and stunning oceanside views. Along with his mystery woman, Jamie has also been joined by his family including his daughter Corinne and a group of friends. Earlier this month, Foxx was captured by the media as he went to Miami to attend the Formula 1 Grand Prix. At the time, he was seen party-hopping with LeBron James and Meek Mill and dining at celeb hotspot Carbone Beach.

Later on, the trio was seen together at GALA Miami where Foxx seemed way too excited as he jumped on the mic to give an impromptu performance. He sang an acapella rendition of Kanye West’s hit song Gold Digger. 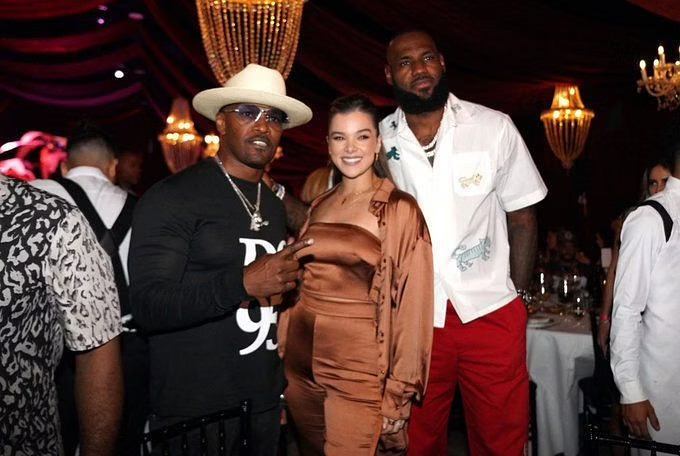 Jamie has been featured in the track. He started by saying, “I’m Jamie motherf–king Foxx,” before asking the DJ to cut the music as “Going Bad” by Meek Mill and Drake began to play. He further added, “We have to start that song from the beginning … everybody get a drink in their hand right now.”

Yes, you heard it right. At some point, Foxx dated Katie Holmes. The pair sparked dating rumors in the year 2013. They dated for a total of 6 years before going their separate ways in 2019. The two of them kept their romance under the wraps and they didn’t go public with their romance until 2018. They made their relationship official at the Clive Davis’ Pre-Grammys Gala in New York in 2018 and just a year later they called it quits. Maybe Jamie and Katie were meant to be but not meant to last.

Do you ship Jamie Foxx and his mystery woman? Kindly let us know in the comments section below. Don’t forget to stay tuned with us for the latest updates from the world of showbiz.