It seems like Machine Gun Kelly and Megan Fox’s relationship is thicker than blood. Recently, the Bloody Valentine singer and the Midnight in the Switchgrass actress were snapped out and about in public together at the premiere of his new film Taurus. Megan and MGK attended the premiere of his new movie ‘Taurus’

On Friday, the Emo Girl singer dropped a series of pictures of himself and Megan from the Tribeca Film Festival premiere of his film Taurus. The one thing that caught the attention of the eagle-eyed fans of the rock star was his blood-filled syringe earring.

In one picture, Megan can be seen licking his blood-filled syringe earning.“pisces moon but the film is called TAURUS. coming later this year…🎬”, he captioned the post.

While attending the North American premiere of his upcoming movie Taurus, Colson Baker aka Machine Gun Kelly flaunted his newly dyed hot pink hair and he sported a white double-breasted Dolce & Gabbana suit, cream-colored high tops, and two strands of pearls, along with bright pink hair and a matching manicure.

On the other hand, his ladylove Megan looked stunning in a red latex Sportmax gown. She completed her outfit with Jimmy Choo Farley Pumps.

This is not the first time that Kelly has used blood as an accessory. In the past, he has been spotted wearing Fox’s DNA in a pendant around his neck. During an interaction with Glamour UK, Fox also stated that she and Kelly drink each other’s blood for ritual purposes. 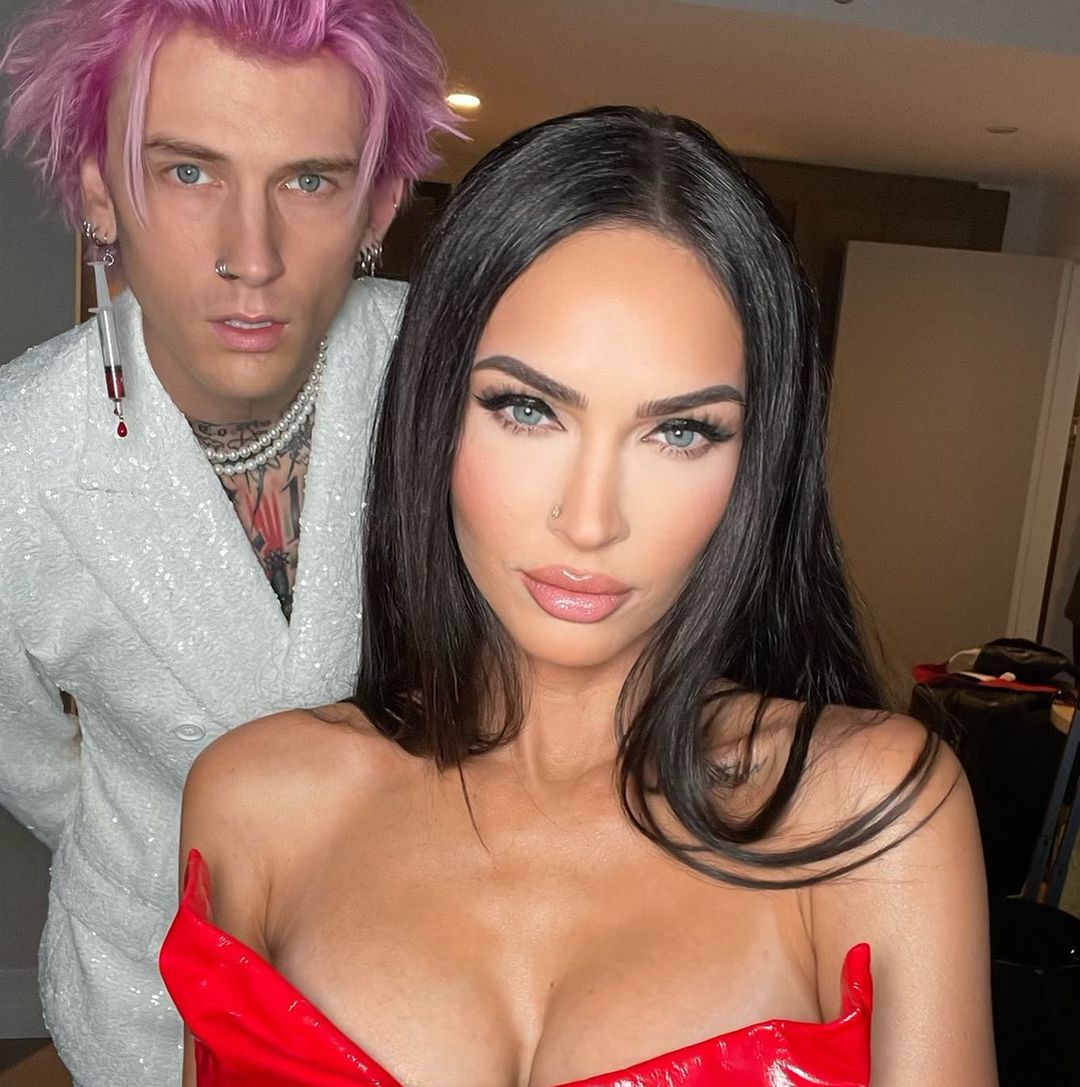 The Hollywood actress told the publication, “It is controlled where it’s like, ‘Let’s shed a few drops of blood and each drink it.’ He’s much more haphazard and hectic and chaotic, where he’s willing to just cut his chest open with broken glass and be like, ‘Take my soul.’”

Megan and Machine Gun Kelly got engaged in January 2022

The Jennifer’s Body star took to her Instagram to share the news of her engagement to Machine Gun Kelly in January of 2022. At the time, she dropped a video of their proposal on the social media platform Instagram.

Megan wrote, “In July of 2020 we sat under this banyan tree We asked for magic
We were oblivious to the pain we would face together in such a short, frenetic period of time. Unaware of the work and sacrifices the relationship would require from us but intoxicated off of the love. And the karma”, in the caption of the post.

Fox further added, “Somehow a year and a half later, having walked through hell together, and having laughed more than I ever imagined possible, he asked me to marry him.
And just as in every lifetime before this one, and as in every lifetime that will follow it, I said yes.…and then we drank each other’s blood 1.11.22 ✨”

Do you think Machine Gun Kelly and Megan Fox are Twin Flames? Kindly let us know what you think about the couple in the comments section below. Stay tuned with us for the latest updates from the world of showbiz.