Hulu Released The Trailer For The Handmaid’s Tale Season 5

It’s going to be a thrilling day for all Handmaid’s fans because the day you were dreaming about is finally here! After making us wait for more than a year, the widely popular Hulu series, “The Handmaid’s Tale” is coming back with its fifth season.

The Emmy winner Hulu series has made its place on almost everyone’s favourite lists and has made the tragedy dystopia genre more popular than ever. The series is undoubtedly one of the best novel adaptations that do not put people off with the crooked storylines and interruptions.

After the previous season’s deadly ending that left all of us shocked, the series is coming back with more complex situations and unimaginable drama. A story based on a warning against the dangers of misogyny and oppression that occurs when women are not free to make choices about their own lives. The series has done some massive progress in bringing such uncomfortable, raw and real emotions to the screen.

After giving us a thrashing first look the previous month, the streaming platform has released the much anticipated trailer for the upcoming season. Here’s everything you should know.

Hulu Released The Trailer For The Handmaid’s Tale Season 5

The much awaited season of The Handmaid’s Tale is coming on a bullet train just a few days away from its big premiere. The series has shown its full capacity making all the fans gear up for the big battle waiting for us in the upcoming season.

With the thrilling first look that dreaded everyone thinking possibilities of June Osborne in season 5 to the first teaser, fans are almost thriving anticipating the season that could play as the best out of all.

Hulu has released the 2-minute trailer showcasing all they have for us in the store this season. Considering we are all now fans of the dystopian world, the trailer quite lives up to that title. The trailer starts right off by establishing the heat and tension between June and Serena that was left off in the previous season. June explains why Commander Waterford deserved all the things that happened to him.

The trailer also reveals that Serena didn’t buy any of June’s explanations and starts to dig into her investigation. With Gilead’s capabilities put in place, the upcoming season is going to be a war between Serena and June.

A lot of other characters are going to be in the upcoming season as a whole rescue mission is going to be executed. The trailer serves as a gearing alarm for a roller coaster ride of emotions. 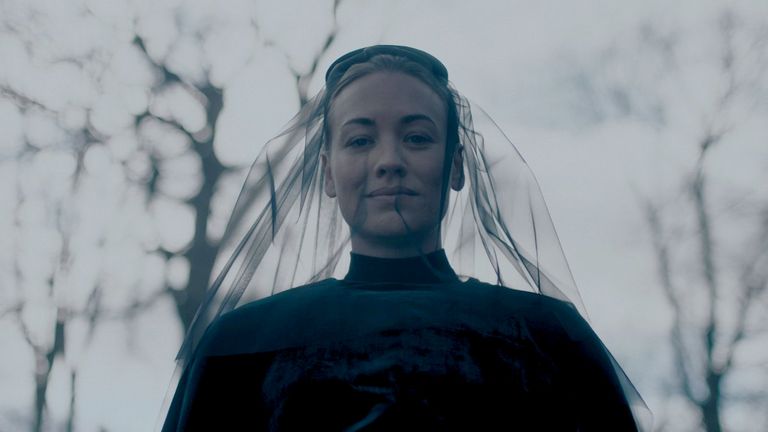 The series is based on the novel by Margaret Atwood’s novel, The Handmaid’s Tale. The story takes place in the dystopian future where women are reduced to childbearing vessels.

As part of a new government policy, fertile women are required to bear children for infertile couples. They are also subject to physical abuse, rape and sexual slavery.

The story starts with Offred, who has been assigned as a handmaiden to a high-ranking official named Fred Waterford.

The entire story is told through her eyes as she tries to navigate through this new world order that has been imposed upon her by religious leaders known as Commanders – men who rule over the population with an iron fist.

The series is going to premiere on September 14th on Hulu.