The Sixth Sense director described Glass as the “first truly grounded comic book movie” while speaking to an audience in Las Vegas on Wednesday. We’ve rounded up everything you need to know about Shyamalan’s latest.

The director reunites with two of his old favorites: Glass will feature two of Shyamalan’s most famous muses — Bruce Willis and Samuel L. Jackson — in leading roles. Willis, of course, was the star of The Sixth Sense and both he and Jackson played the main roles in 2000’s Unbreakable.

Glass will act as the connecting tissue between several of Shyamalan’s films: Sarah Paulson plays a psychiatrist who is working with Willis and Jackson (who are reprising their characters from Unbreakable). Her third patient is played by James McAvoy as the Scottish actor returns to his role as Kevin Wendell Crumb from Split. Paulson brings together all three characters, who explain that they believe they are real-life superheroes. Willis (of course) also has to thwart a plot that would cause an apocolypse.

The director will have creative control: Just as he did with his 2016 thriller Split, Shyamalan will be self-financing Glass. While making Split, he explained his reasoning behind this decision. “The burden is off of the movie because it’s made for such a low budget that it’s almost certain everyone has won,” Shyamalan said to The Hollywood Reporter at the time. “It doesn’t have to make hardly any money for it to be successful, and that’s a wonderful, wonderful feeling.” (For the record, Split cost a bit under $10 million to produce.)

Samuel L. Jackson delighted the audience with the most Samuel L. Jackson quote possible: The film’s title gets its name from Jackson’s character Mr. Glass. For his part, Jackson said he was delighted to play the titular role at last. “It’s about time I got the title role in my own motherf—ing movie,” Jackson told the CinemaCon audience. 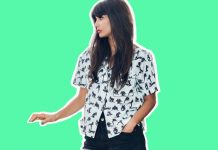