Former WWE superstars Bray Wyatt and JoJo Offerman are engaged! We are so happy that these two found love. Read the article further to know about the fairytale romance of the lovebirds. When did Bray begin dating JoJo?

The couple has been together since the year 2017. The pair also shares two children, a baby boy, and a baby girl. The names of their kids are as follows: Knash Sixx Rotunda and Hyrie Von Rotunda. They welcomed their son Knash in 2019 and their daughter joined them earthside a year later.

Honestly, we knew that these two would end up together one day or the other. We are glad that Bray has finally popped the question to the love of his life.

JoJo confirmed the news of her engagement on social media

The 28-year-old took to her Instagram to affirm the news of her engagement to her longtime boyfriend Bray Wyatt. She posted a series of pictures with her stunning engagement ring.

“A million times YES! 😍😭 I love you Windham and I cant wait to marry you (even though it feels like we’re already married 😜) Here’s to forever ❤️ @thewindhamrotunda”, she captioned the post.

In the photos shared by JoJo on the social media platform, we can her in a green outfit with a gorgeous engagement ring on her ring finger. Her face is glowing just like the sun in the pictures from the duo’s special day and she seems to be super happy.

Wyatt gave a quick sneak peek to his fans all over the world about the pair’s Valentine’s Day celebration in February of 2021. He shared a couple of pictures on the photo and video sharing platform.

The pro wrestler wrote, “I hope you find someone who will stand with you when you’re on top of the world, and pick you up when you’re underneath it. Happy Valentines Day @joseann_alexie Thank you for being my reason”, in the caption of the post.

WWE released JoJo in the year 2021

As per the reports, Offerman was released from the side of WWE last year. Many fans assumed that she left the world of WWE but the truth is she was able to get a hold of some type of leave when she was expecting her first child.

On the other hand, Bray was released from the company on July 31, 2021. Throughout his career spanning over 12 years, he played several characters. To date, he is considered one of the greatest stars of all time. 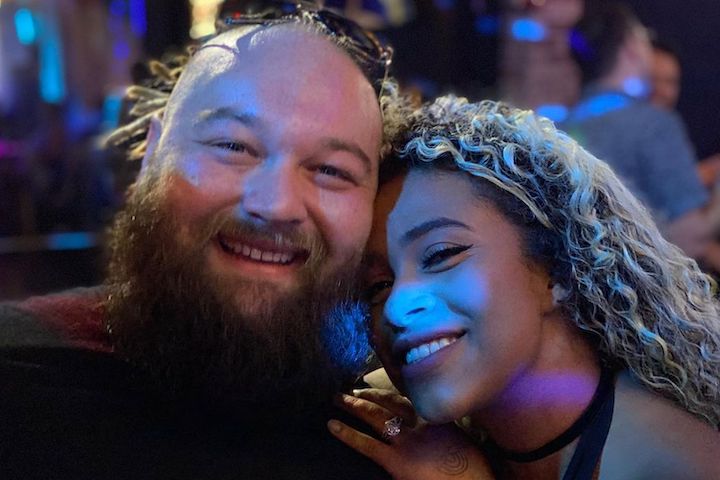 It looks like when JoJo was pregnant, she took maternity leave since the company didn’t make any official comment on her departure at the time. According to PWInsider, Offerman was released from the company around 6-8 months ago and it was referred to as a quiet departure.

We send our hearty congrats to the gorgeous couple on getting engaged. Do you think that there is a chance of them returning to professional wrestling soon in the future? Drop your thoughts in the comments section below. Don’t forget to stay tuned with us for the latest updates from the world of showbiz.