Former Stripper To Auction Prince Harry’s Undies, Claims He Gave Them To Her In Vegas Party

Another Royal Scandal! A stripper is selling a pair of underwear she claims Prince Harry gave her in Las Vegas. If you don’t know this, the 10th anniversary of Prince Harry’s wild night at a naked Las Vegas party is coming up, and ex-stripper Carrie Royale claims to have Harry’s royal undies, and she feels the time is right to put them on auction. A former stripper Carrie Royale has a royal story to tell! She recalls a night with Prince Harry 10 years back during a naked Las Vegas Party and claims to have something that the prince left for her. Well, she is all set to auction it.  The exotic dancer claims she was in the hotel room with Harry when he stripped down to his birthday suit playing pool.

The 10th anniversary of Harry’s wild night in Vegas is coming up this month. Now, Carrie is set to auction off Prince Harry’s royal undies along with the dress and swimsuit she wore that night. There is a photo of Harry in Vegas back in August 2012 where he can be seen cupping his genitals with a seemingly topless woman and bear-hugging another one who appeared to be nude as well.

So, believe it or not, the story does have an authenticity to it. While Carrie kept the royal undies hidden for almost 10 years, she feels that the time is right to reap her rewards. She says “word on the street is Prince Harry dropped by Larry Flynt‘s Hustler Club during his wild trip to Vegas, so yes, the strip club is hosting the auction. Carie believes that the underwear sale is a roundabout moment for Prince Harry, stating: “I’m holding the auction to help him remember his fun side, the side that marked his marriage to his wife. Meghan has tried to master.” Wow. So if you’re looking forward to this auction, live and online bidding begins Thursday at 10″30 p.m. PT, with a starting bid of $10,000.

The word on the street is that the auction for these black undies may go up as higher as $ 1 million. When the bidding reaches $800k, the winner will receive a vintage 3-litre bottle of 1996 Dom Pérignon Rose wrapped in 24K gold, valued at over $200k. And yea, the final winner would get to keep Prince Harry’s royal undies. Jealous Megan? Well, not sure if she is because a portion of the auction proceeds will go to Harry and Meghan’s charity Archewell.

How True Is Carrie’s Story? 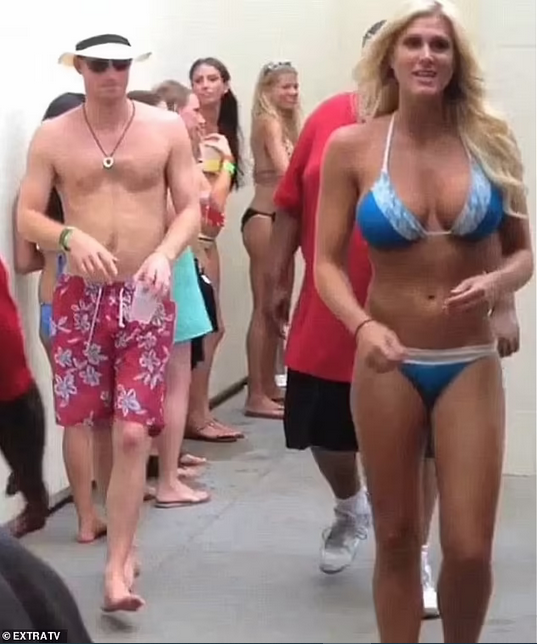 Even if you don’t believe it, Carrie seems to be the owner of Prince Harry’s underwear. Last year, Harry, who shares two children with his wife Meghan, broke his silence on the shocking photographs from 2012 but insisted the situation could have been worse.

During an appearance on Dax Shepard’s ‘Armchair Expert’ podcast, the host told him: “You’re the only one I ever knew [from the Royal Family] and simply because you were in those awesome nude photos in Vegas. And I literally said to myself, ‘This guy’s a party!’”

Harry replied: “I’m sure, you’re constantly looking for other people to go, sort of balance out your own behaviour, right? It’s relatable! At least I wasn’t running down the strip, stripping naked!” Well, he was there and we’re sure he left his belongings. What do you think?