Your favourite Cat has accepted her first Grammy for the Best Pop Duo for “Kiss me more” along with SZA in the Group Performance category.

The winning moment for the Doja Cat was about to be missed because mother nature called her before she was called on the stage to receive her award. After nearly missing her first Grammy moment, Doja was all emotionally fueled up on the stage.

The 64th Annual Grammy Award ceremony celebrated a bucket full of nominations and winners amongst which Doja Cat and SZA took home their award for the Best Pop Duo/Group Performace.

The “Kiss me more” duo beat up some incredible nominees fighting in the category. Here’s everything you need to know.

The night of the music awards shows especially a show as coveted as the Grammys is always exciting. 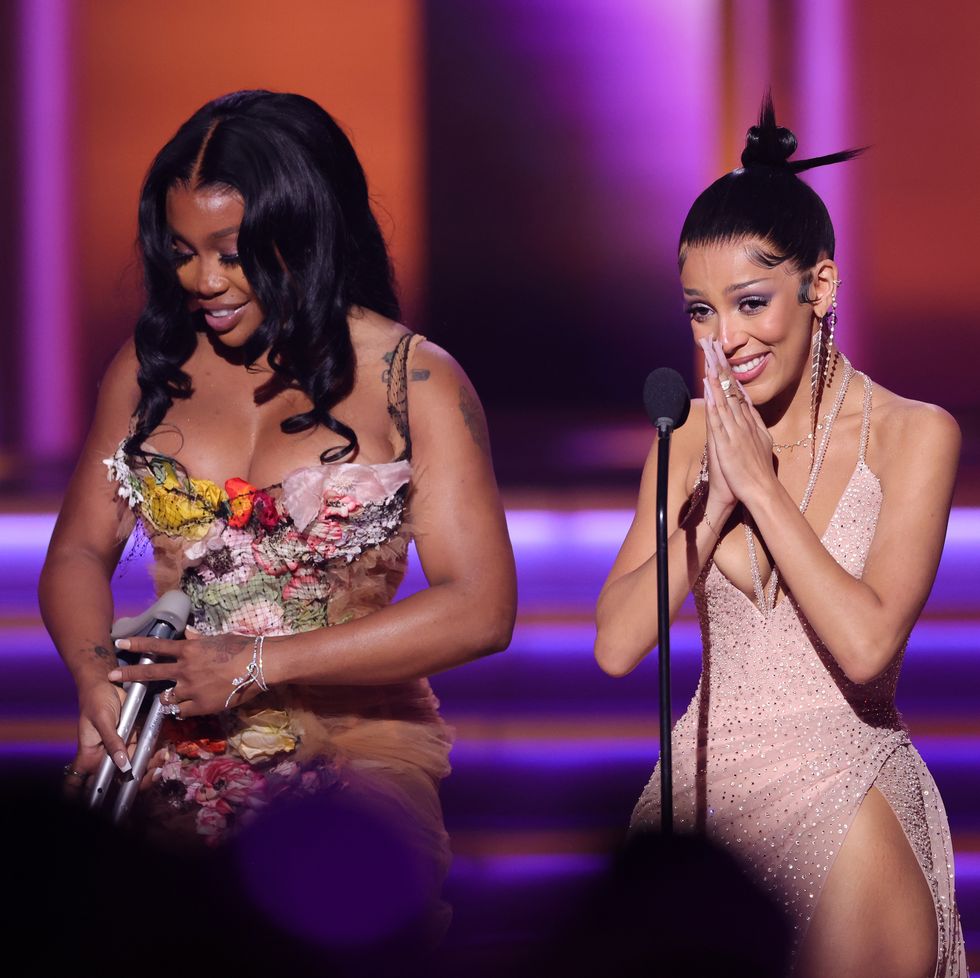 Last night’s winners had plenty of highlights but one award in particular, was extra special and remarkable as the “Kiss me more” singer Doja Cat bragged her first Grammy at the 64th Annual Grammy Awards ceremony held on Sunday.

Doja Cat along with SZA received the award for the Best Pop Duo leaving fellow nominees behind including BTS, Justin Bieber, Tony Bennett, Coldplay, Benny Blanco and Lady Gaga.Doja Cat was nominated for 8 categories at the show tonight, including Record of the Year, Song of the Year, and Album of the Year.

Yes, you heard that right. Doja Cat almost missed her first Grammy acceptance due to some bladder issues which she settled quickly.

The video shared by the Recording Academy is doing rounds on the internet for not the most obvious reasons of Doja Cat explaining herself after almost missing her Grammy acceptance over pee break.

After the announcement made by Avril Lavigne for the winners of Best Pop Duo, SZA walked up to the stage all by herself.

She was wearing a beautiful gown with a long veil that was carried safely to the stage with the help of Lady Gaga.

SZA was finally accompanied by Doja Cat who arrived hastily after a pee break. The first words of Doja Cat at the Grammy ceremony receiving her award, “I have never taken such as fast piss in my whole life”.

After wrapping the funny pee moment, Doja Cat teared up and escalated the conversation into a very sweet speech expressing her gratitude for her fans and her parents.

She thanked SZA for being her helping hand and described her as the epitome of talent. She also pushed SZA to give the fans and the viewers something from her end on winning the big Grammy trophy.

Doja turned all emotional saying she likes to keep things grounded and down but winning a Grammy is a big deal.

The speech was followed up with a louder cheer including fellow nominee Lady Gaga who was seen getting emotional along with Doja’s speech.

It’s a big win for our favourite “Woman” and we wish her a big loud congratulations!