Demi Lovato debuted her new rock song “Skin of My Teeth on Thursday (9 June) with a live performance on The Tonight Show Starring Jimmy Fallon on NBC. The 29-year-old singer also revealed the secret behind writing a hit song. Read on to learn more about this conversation.

Demi Goes Back To Her Roots… 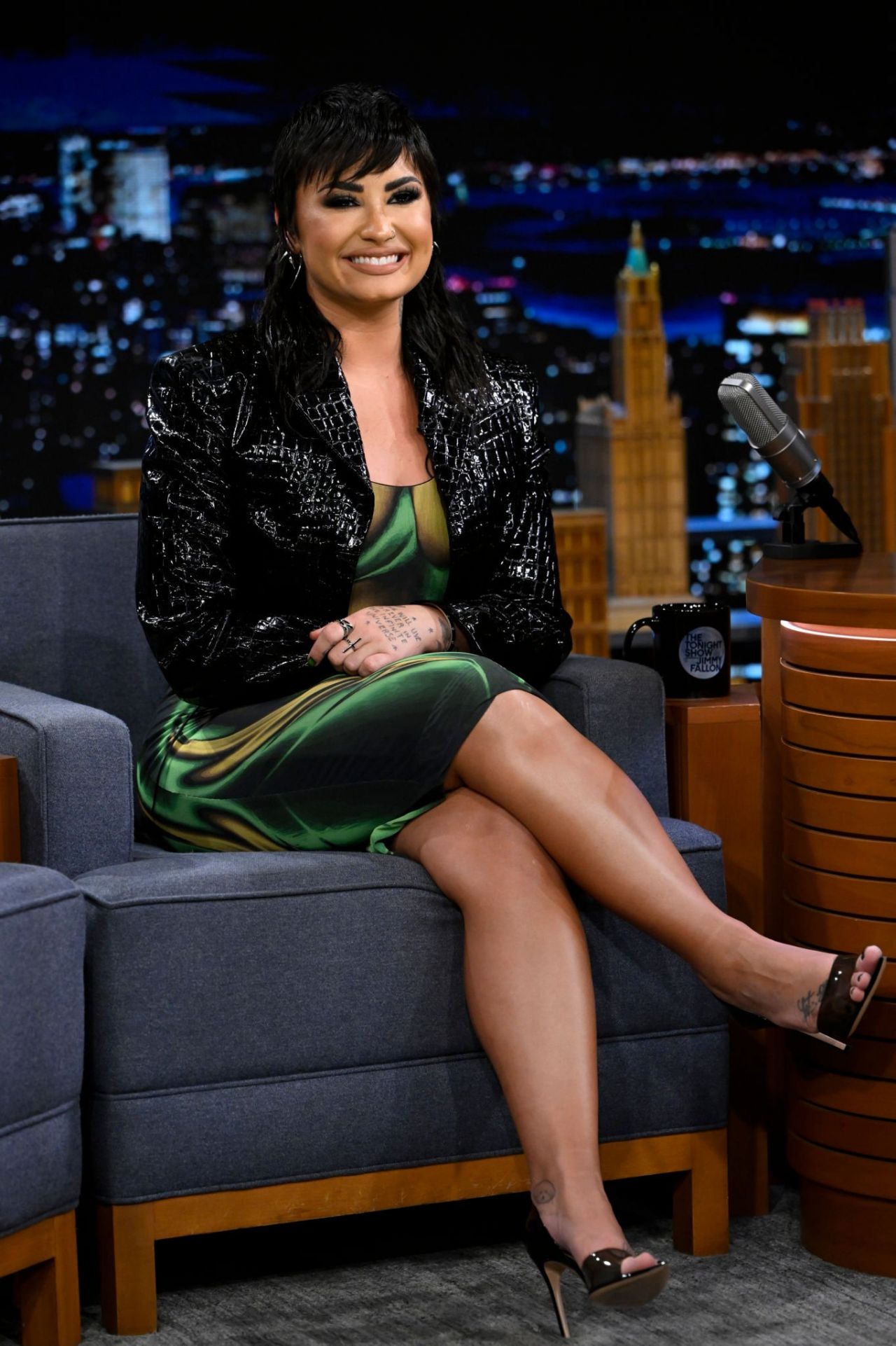 Jimmy Fallon revealed Demi Lovato’s new song Skin Of My Teeth that releases today (10 June). The Tonight Show host also revealed that Demi would be performing the song on this show for the first time ever.

Jimmy stated that as far as the snippets he heard, Skin of My Teeth seems like a heavy song. He said, “But it’s rock and roll.” Demi replied, “Yes, it is. It is definitely a change of pace for me but I am also going back to my roots because that’s what I started singing when I released my first album and my second album.”

Demi also revealed that she gets more nervous to perform a song than it is to be out a night before its release. Demi said, “If you’re not nervous before you do something, you’re not passionate about it. I think it’s just a part of living.” 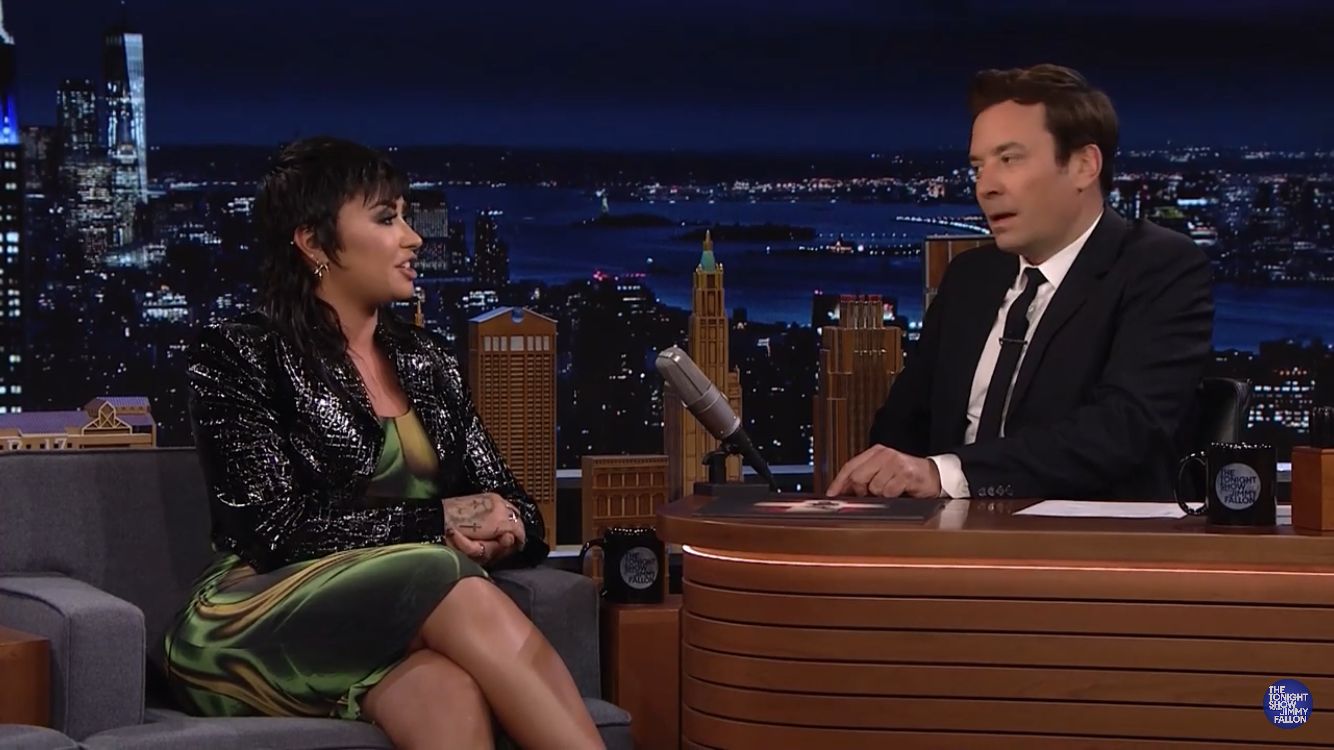 Jimmy spoke about Demi’s eighth studio album “Holy F***” which releases on August 19. Jimmy revealed that Demi felt herself while making this album. Demi revealed that she came out of treatment last year and wanted to make the best album ever. She also stated that she made this album “clean and sober”.

A Live Performance By Demi

The 29-year-old singer wore an all-black outfit for her performance of the lead single from her upcoming eighth studio album Holy F ***. Demi played the guitar while performing Skin Of My Teeth, which refers to personal struggles with drug addiction, including a highly publicized opioid overdose in 2018. 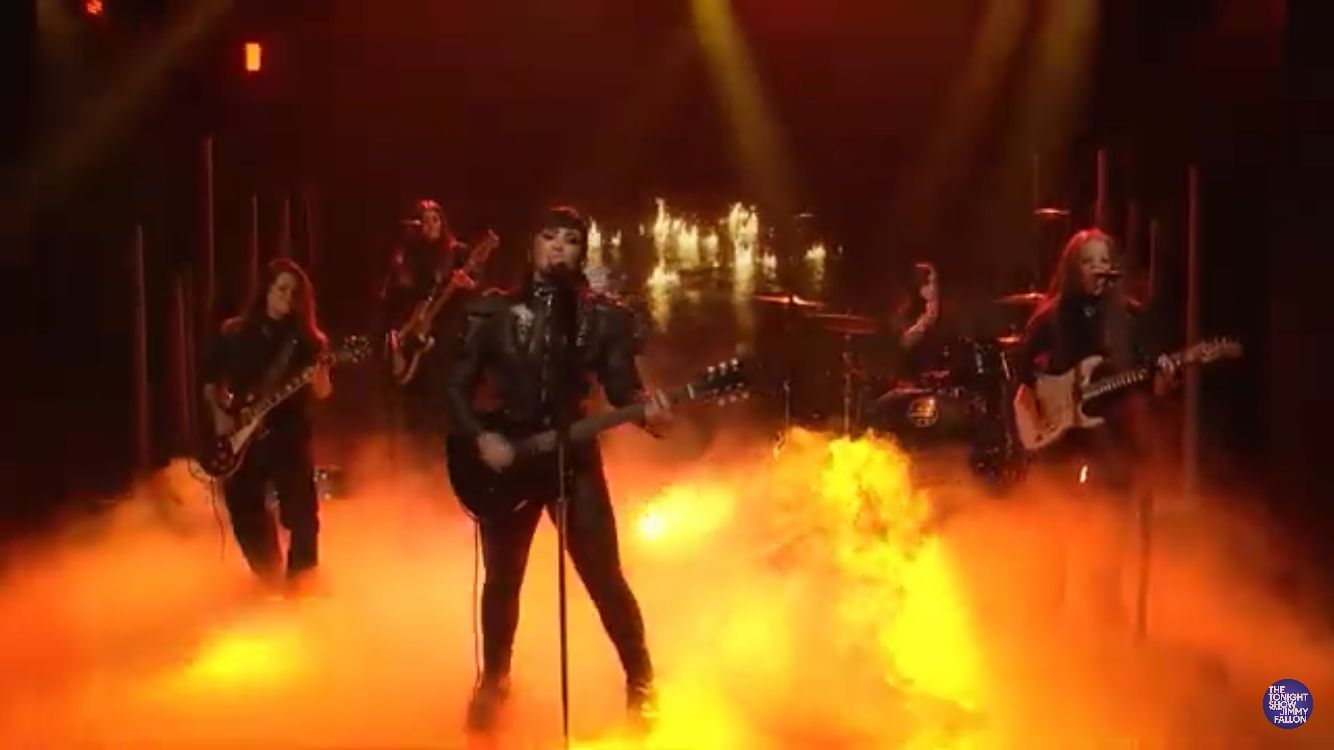 About her eighth album “Holy F***”, Demi stated, ‘Yes, I’ve certainly experienced a ton. That’s no secret to the world, And I, you know, after having had more things last year, I came out of treatment again.

She added, “And I realized, like, I really want to do this for myself and I want to make the best album possible, something that, you know, really represents who I am and I think the best way to do it and the easiest way to what to do the most authentic are to do it clean and sober.”

Demi’s song “Skin of My Teeth” was released today and the lyrics surely narrate her struggle. It feels like the 28-year-old singer has poured her soul into the song.  At the beginning of the song, you can see Demi singing in a bathtub. There are newspaper cuttings which suggest, “Demi leaves rehab again.”

The lyrics go like this: “Demi leaves rehab again, When is this shit gonna end? Sounds like the voice in my head, I can’t believe I’m not dead. I’m alive by the skin of my teeth. I survived, but it got harder to breathe. Askin’ why doesn’t make it easier, Go easier on me? Goddamn it, I just wanna be free. But I can’t ’cause it’s a fuckin’ disease. I’m alive by the skin of my…”

The song’s verse 2 is pretty interesting as Demi sings, “The reaper knocks on my door, ‘Cause I’m addicted to more. I don’t need you to keep score When I’m the one who’s at war…I’m alive by the skin of my teeth, I survived, but it got harder to breathe.” Well, the song really touches the soul. 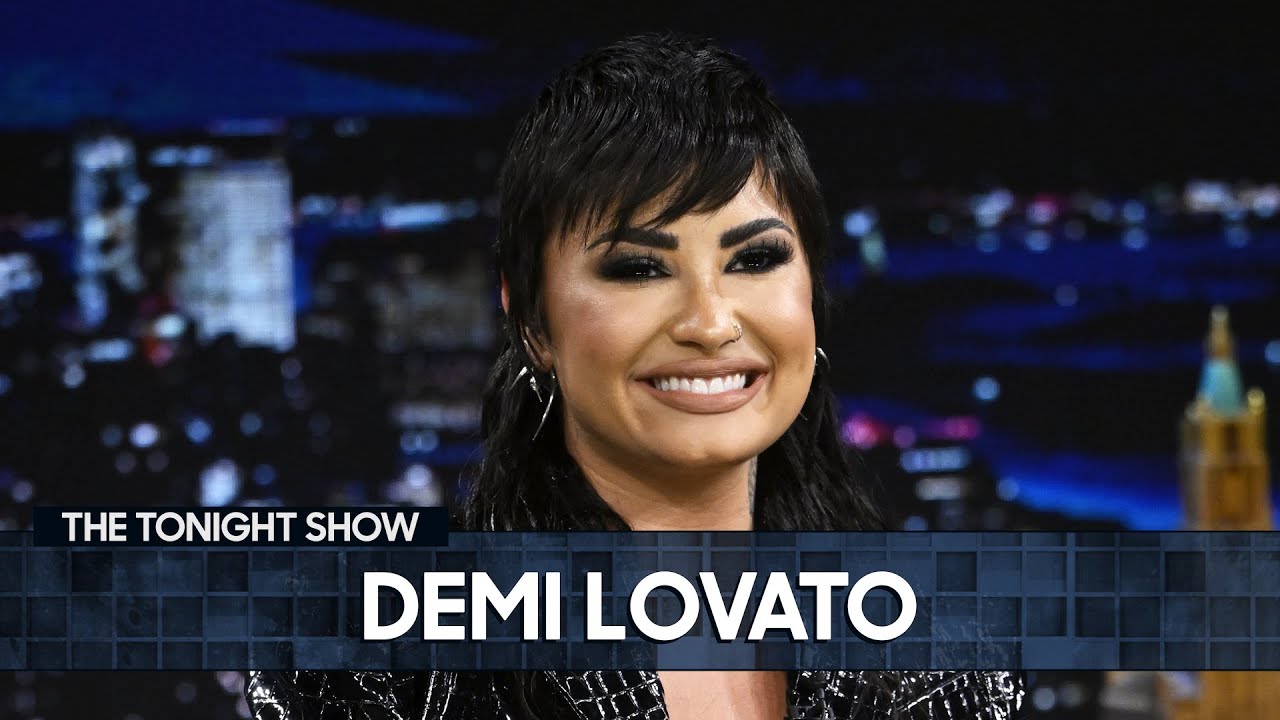 Jimmy Fallon asked Demi about her approach to writing songs. He said, “You write the titles first and then write the song?” Demi stated the technique by revealing that she learned it from John Mayer. She said, “Like years ago, we wrote when I was like, making my second album and he was like…”

She continued, “Mayer said something about creating songs from the song titles and just, like loving–He thinks that would be the most intriguing. And soI king fo took that and when making my last couple album, I really learnt how to write songs from song titles.”

Demi revealed that she comes up with concept ideas from the song titles, and that is how she writes her music. Jimmy asked that “when you’re dreaming, do you wake and feel like recording on your phone?”

Demi replied, “There are times when I am about to fall asleep and I have to wake up to either record it or write it down on my phone. And it’s so annoying. But it’s kind of. I am half asleep, and I am Like…Ugh, I am gonna ruin this I am falling asleep right now.” Jimmy meant mumbling in sleep. 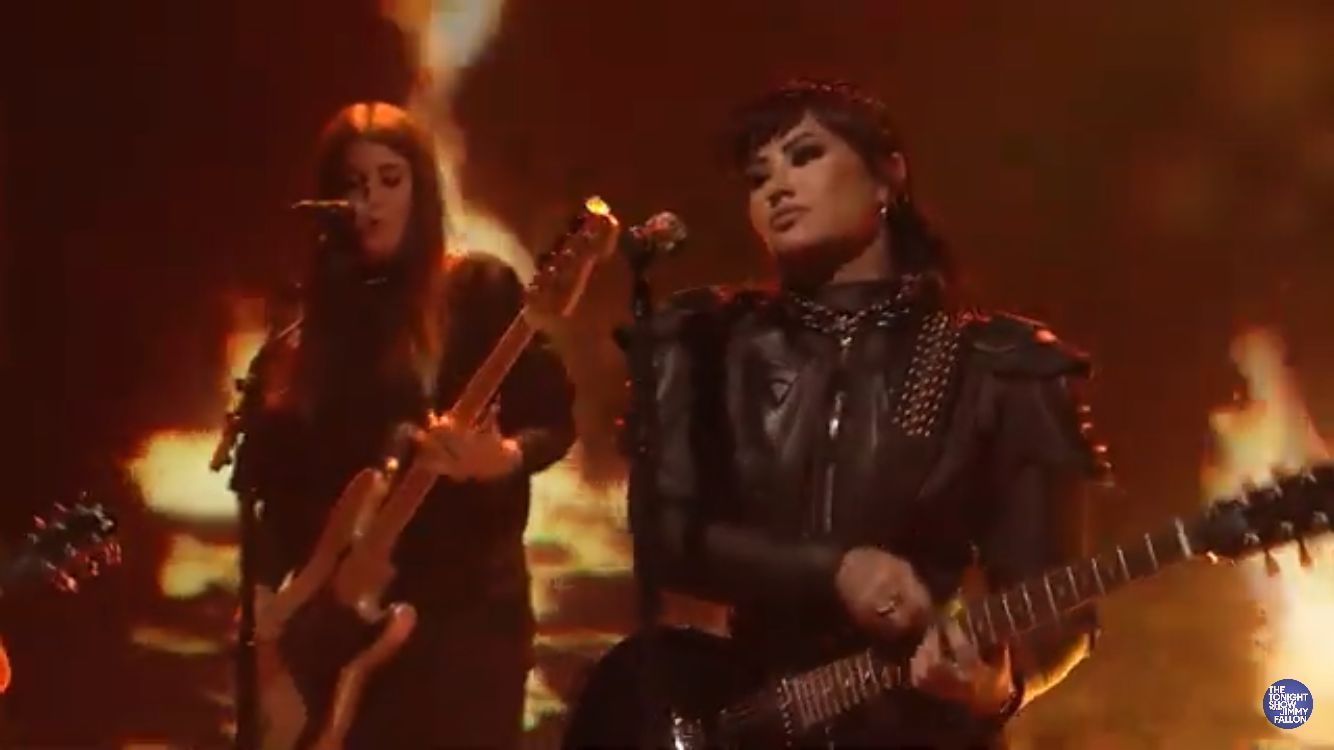 Jimmy even gave Demi the word “Spit” so she could make a song out of the title. Jimmy then said that he heard her doing vocal warmups earlier today. Demi even taught Jimmy how to do a vocal warmup. She sang, “Mi, mi, mi, mi,mi, mi, mi….” Well, that does clear the vocals Demi also taught Jimmy a few moves from her vocal warmup regime.

Demi Lovato has been a drug addict and struggled with mental health issues. She stated in 2021, that she was raped at the age of 15 when she was an actor on the Disney Channel and the rapist was a co-star. Demi’s new song “Skin of My Teeth” is out! What do you think about the song?