Portuguese footballer Cristiano Ronaldo received the most exquisite gift from his partner. The former Manchester United forward is having a gala time back home with his family, and his partner ensured to make it even more special. Georgina Rodriguez gifted Ronaldo a lavish Rolls Royce. 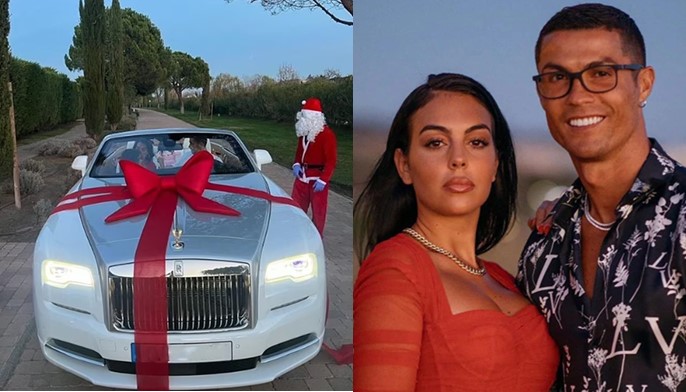 A Gorgeous Christmas Gift To Ronaldo

After returning from a disappointing quarter-final exit, Cristiano Ronaldo has returned back home to spend quality time with his family this holiday season. The 37-year-old posted a thank-you message to his partner Georgina Rodriguez who gifted him a lavish Rolls Royce to make his Christmas even more special.

Ronaldo wrote on Instagram, “Thank you, my love.” On the other hand, Georgina posted a video where she was seen surprising Ronaldo with the Christmas gift. Ronaldo was seen driving the brand-new car with Georgina and their kids.

To make the moment even more special, someone appeared in a Santa Claus costume as the Ronaldo family celebrated a gleeful Christmas. In her post, Ivana Rodriguez commented, “how wonderful how much fun we had and the laughs with the skinny Santa Claus who accompanied us🤣 🤣 🤣.”

Ali Karoui commented, “Merry Christmas to you and your wonderful family. A fan joked, “I bet you’ll trade everything you’ve got for my World Cup…” Another Georgina fan wrote, “But do you have any idea what this lady earns? Only in fans here? And in advertising? She already has her own name and brand, she doesn’t need Cristiano anymore.”

As for this super expensive car, when you’re the highest-paid Instagram model, everything can be bought. Last year, she got him a $100,000-worth Cadillac Escalade on his birthday. Well, Ronaldo is one lucky lover.

Rocky Road Ahead For Cristiano… Ronaldo may be the richest footballer out there with a net worth of $1 billion, but his partner is no less. The Argentinian model boasts more than 44 million followers on Instagram and easily earns around £860,448 per advertisement on her famous social media account.

Coming back to his professional career, Cristiano’s contract with Manchester United ended last month and the footballer is looking out for a new club. It was reported recently that he was about to join Al-Nassr (a South Arabian club), however, he denied any agreement with this club.

Well, the 37-year-old footballer didn’t have the best campaign with Portugal during the FIFA World Cup 2022. His team was kicked out in the last 8th stage, suffering a brutal defeat at the hands of Morocco. If you may recall, in his previous explosive interview with Piers Morgan, Ronaldo revealed that his future with Manchester United is uncertain, and that’s exactly what happened. Ronaldo stated on the Piers Morgan Uncensored TV show. “I don’t have respect for him because he doesn’t show respect for me,” referencing Manchester United manager Erik ten Hag and stating that he feels “betrayed’ by the club. However, he mutually parted with the club last month. Well, his career may seem uncertain at the moment, but he’s got the wholehearted support of his family, especially his partner who leaves no attempt to put a smile on his face.