We know you all are curious to know where did Cristiano Ronaldo meet his ladylove Georgina Rodríguez, when did the pair start dating, and more. Read the article further to know more about the dating history of the couple. Cristiano Ronaldo and his girlfriend Georgina were expecting twins. He announced the news of his baby boy’s passing away on the social media platform Instagram on April 18, 2022. On the other hand, their baby girl is giving them strength at this time.

“It is with our deepest sadness we have to announce that our baby boy has passed away. It is the greatest pain that any parents can feel. Only the birth of our baby girl gives us the strength to live this moment with some hope and happiness”, the Manchester United Striker captioned the post.

The 37-year-old further added, “We would like to thank the doctors and nurses for all their expert care and support. We are all devastated at this loss and we kindly ask for privacy at this very difficult time. Our baby boy, you are our angel. We will always love you”.

Our thoughts and prayers are with the footballer, Georgina, and the whole family during this difficult time. Sending lots of strength and light to them.

The pair announced that they were having twins in October of 2021. Cristiano unveiled that the duo was expecting a baby boy and a baby girl via a lovely video along with his children on Instagram. “Where life begins and love never ends ❤️❤️❤️❤️❤️❤️”, he captioned the post.

In the video shared by the athlete, we witnessed four of his kids, Cristiano Jr., Alana, Twins Eva, and Mateo. Cristiano Jr. and Mateo were seen holding one balloon while another balloon was held by Alana and Eva. Then, Georgina counts to three and the kids pop the balloons.

Let’s learn more about the dating history of the couple

Georgina and Ronaldo met for the first time in the year 2016. A year before, the soccer star had just come out of a five-year-long relationship with Russian model Irina Shayk. As per the reports of the sports website Goal, Cristiano met Rodríguez for the first time when she was working as a sales assistant at a Gucci store. Just one day, the two passed each other while she was leaving work. According to SportBible, Georgina talked about their first meeting in the documentary and said, “I stopped and started to feel like tickles in the stomach.”

During an interaction with The Sun, the model spilled the beans on their next meeting. They met during an event for another brand.  She said, “It was then that we could talk in a relaxed atmosphere, outside of my work environment. It was love at first sight for both.”

Georgina and Ronaldo were spotted out and about in public together at Disneyland Paris in November of 2016. The footballer was seen wearing a black sweatshirt with a pair of blue jeans. He topped off his look with a pair of black sunglasses and a black hat.

On the other hand, his girlfriend Rodríguez looked good in a grey dress and she adorned a black coat over it. They seemed quite comfortable in each other’s company. The couple was photographed walking hand in hand. 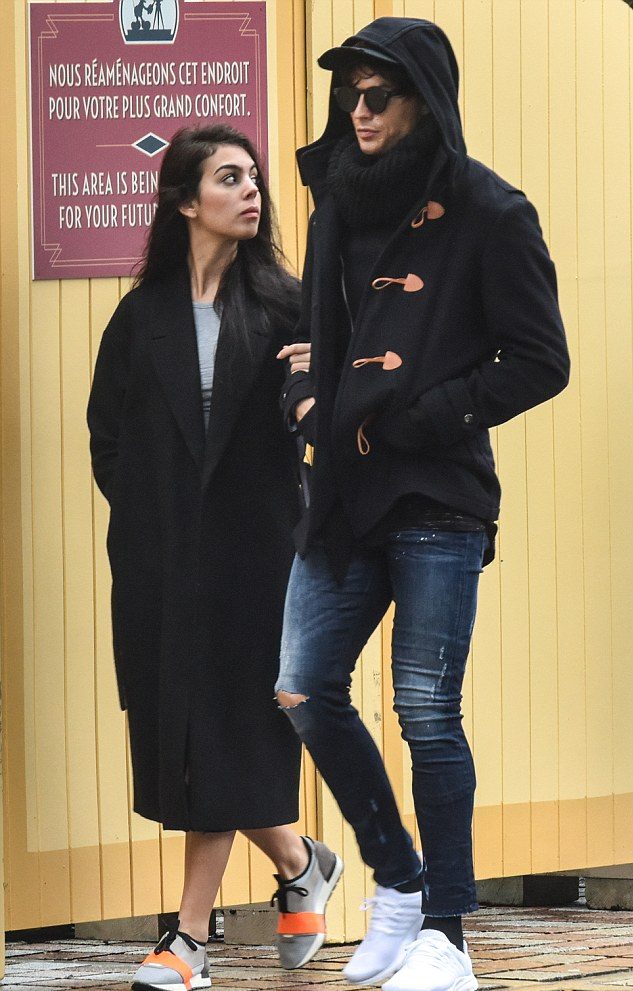 The couple went Instagram official with their romance on May 26, 2017. Ronaldo shared a picture of the duo on the photo and video sharing platform Instagram. He put a single red heart emoji in the caption of the post.

When we talk about Georgina, she posted a photo with her boyfriend around the same time, in which we saw her posing with a group of friends after a J Balvin concert in May 2017.

Rodríguez shared the happy news that she was expecting her first child with the athlete with her fans all over the world in August 2017. She confirmed the news of her pregnancy in an exclusive interview with Hola!, during the same year, Ronaldo had welcomed twins through a surrogate, a baby boy named Mateo, and a daughter Eva Maria in June.

In an interview on The Jonathon Ross Show, Cristiano said, “People speculate I was with this girl or another, or there was a surrogate mother”. In the past, he was also quite private about the birth of his first child, Cristiano Jr.

The Portuguese footballer further added, “When Cristiano [Junior] is going to grow up, I am always going to say the truth to him because he deserves it, because he is my son but I am not going to say because people want me to say.”

The two welcomed their first baby together, a baby girl named Alana Martina. The football superstar announced the arrival of their daughter on Instagram with a sweet family picture that was taken in the hospital.

After a while, Cristiano revealed in the same month that he wanted to have a total of seven kids which is equal to the number of Ballon d’Or awards that he wishes to win. He told The Sun, “That means I do not intend to stop there. As long as I play, I will win all I can win.”

Many speculations regarding the duo’s marriage were going around in circles at the time. The former Real Madrid player cleared the rumors swirling around his marriage to his longtime partner Georgina and described them as ‘untrue.’ In an episode of Piers Morgan’s Life Stories, Cristiano said that he and Rodríguez will “be [married] one day for sure”. He further added that it’s his “mum’s dream as well. So, one day. Why not?”

The power couple announced that they were having twins on the social media platform Instagram. “Delighted to announce we are expecting twins👶🏻👶🏻. Our hearts are full of love – we can’t wait to meet you ❤️🏠”, Ronaldo captioned the post. He also added the hashtag “#blessed” in the caption.

This must be a difficult time for Ronaldo, his girlfriend Georgina, and their family and close friends as the pair just lost one of their twins. We are deeply saddened by the news of his son’s passing away and we send our deepest condolences to the player and his entire family. Don’t forget to stay connected with us for more updates from the world of showbiz.