Argentinian-American actress Julie Gonzalo is having a baby with the Canadian actor Chris McNally. The “When Calls The Heart” star was tagged by Julie in a photo as she announced the newborn. Read on to learn more about it. 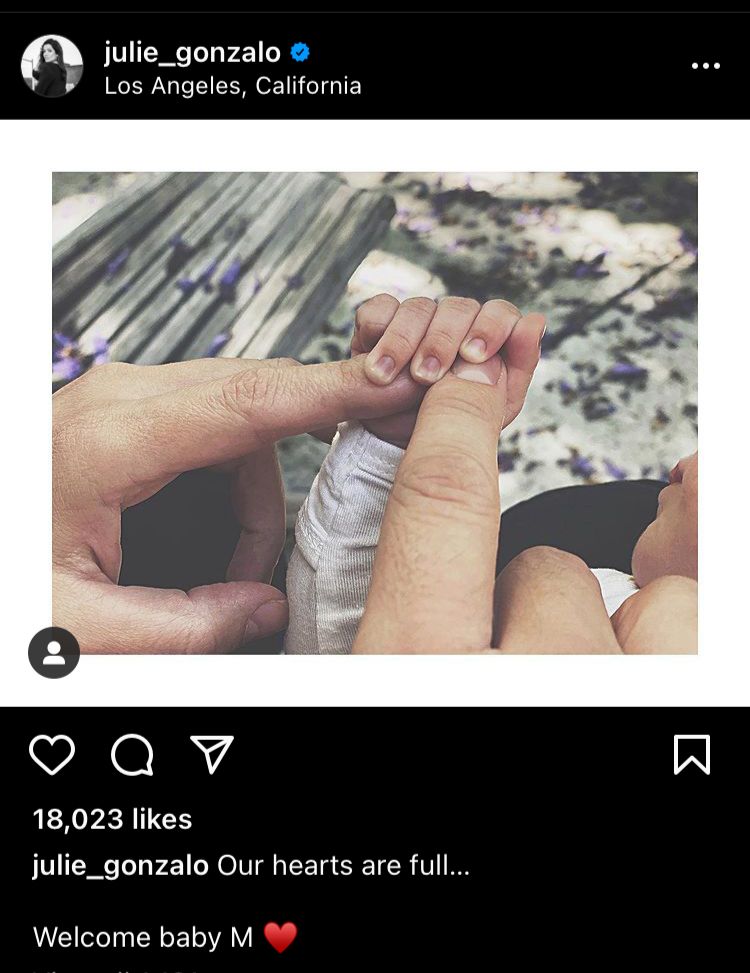 Chris McNally and his longtime partner, Julie Gonzalo, have welcomed a baby! “Our hearts are full…Welcome baby M ♥️,” Gonzalo, 40, captioned the post on Instagram. In the picture, their baby’s hand is holding onto two adult fingers, though the newborn’s face, isn’t fully visible.

Julie tagged the Hallmark star, however, McNally is yet to share the announcement on his social media. The news of the baby’s arrival has come as a surprise as the pair did not announce their pregnancy before the birth of their baby M.

The news was met with both surprise and love, as fans and celebrities flooded Julie’s Instagram to congratulate the gorgeous couple. Gonzalo’s Dodgeball co-star, Justin Long wrote, “Whaaaaaat??? Julie!!! You had a REAL baby! (I hope our movie baby doesn’t get jealous). Congratulations.” Emma Bell wrote, “CONGRATULATIONS MAMA!! Welcome to the world baby and mother.”

“Awww congratulations julieeee!!!❤️❤️❤️❤️❤️❤️❤️❤️❤️❤️❤️❤️,” Alexis Knapp added.  Brenda Strong wrote, “Beyond thrilled for you three! ♥️♥️♥️ What a beautiful manifestation of your love.”

Co-star Erin Krakow, who plays Lucas’ fiancee Elizabeth, replied to their post by writing, “🥰🥰🥰.” Pascale Hutton, who plays Rosemary in the series, replied with heart emojis. Pascal Hutton and When Calls the Heart’s Andrea Brooks also sent heart emojis to the couple. McNally and Gonzalo, who starred alongside each other in Hallmark Channel’s The Sweetest Heart, have been dating for some time. For the most part, the couple has kept their love out of the spotlight and away from social media.

Chris McNally usually keeps his personal life under wraps but previously, fans could guess that he’s been dating Julie based on the photos they shared that showed what appeared to be his dogs posing in similar locations.

In 2019, in an interview with LA Times, Chris opened up about stretching a collapsible tent and laying down a kingsize mattress for four. Well, we knew he was talking about Julie and their two adorable dogs, Charlie and Bowie.

Dating rumours were neither accepted nor denied by the two stars. However, the newborn has confirmed that Chris and Julie have embarked on a new journey in life. Although she didn’t name McNally as the father in the post, Julie tagged him and herself in the photo announcing the baby’s birth.

McNally is the cousin of actor and singer Drew Seeley. His film career began with his award-winning portrayal of John Jardine in 2013’s John Apple Jack. On the other hand, on television, Gonzalo debuted in The WB comedy series Greetings from Tucson.

FYI, McNally is an actor and writer. He is a member of the Hallmark stable of wholesome talent, with appearances in several holiday productions distributed by Hallmark Movies & Mysteries, such as Hearts of Christmas (2016); Rocky Mountain Christmas (2017); The Sweetest Heart (2018); and A Winter Princess (2019). As for the newborn, we congratulate the couple on their new beginnings. And official confirmation is yet to come from both the stars. Don’t you think it’s high time that Chris officially proposes to Julie? Well, we hope they tie the knot very really soon as I can already hear wedding bells.