Chainsaw Man is out with the final episode of Season One. This marks the end of the Katana Man Arc. Episode 11 showed Aki making a contract with the Future Devil. The newly formed Divison 4 has some new Devil Hunters. Aki, Denji, and Power make their way to hunt down Akane and The Katana Man. 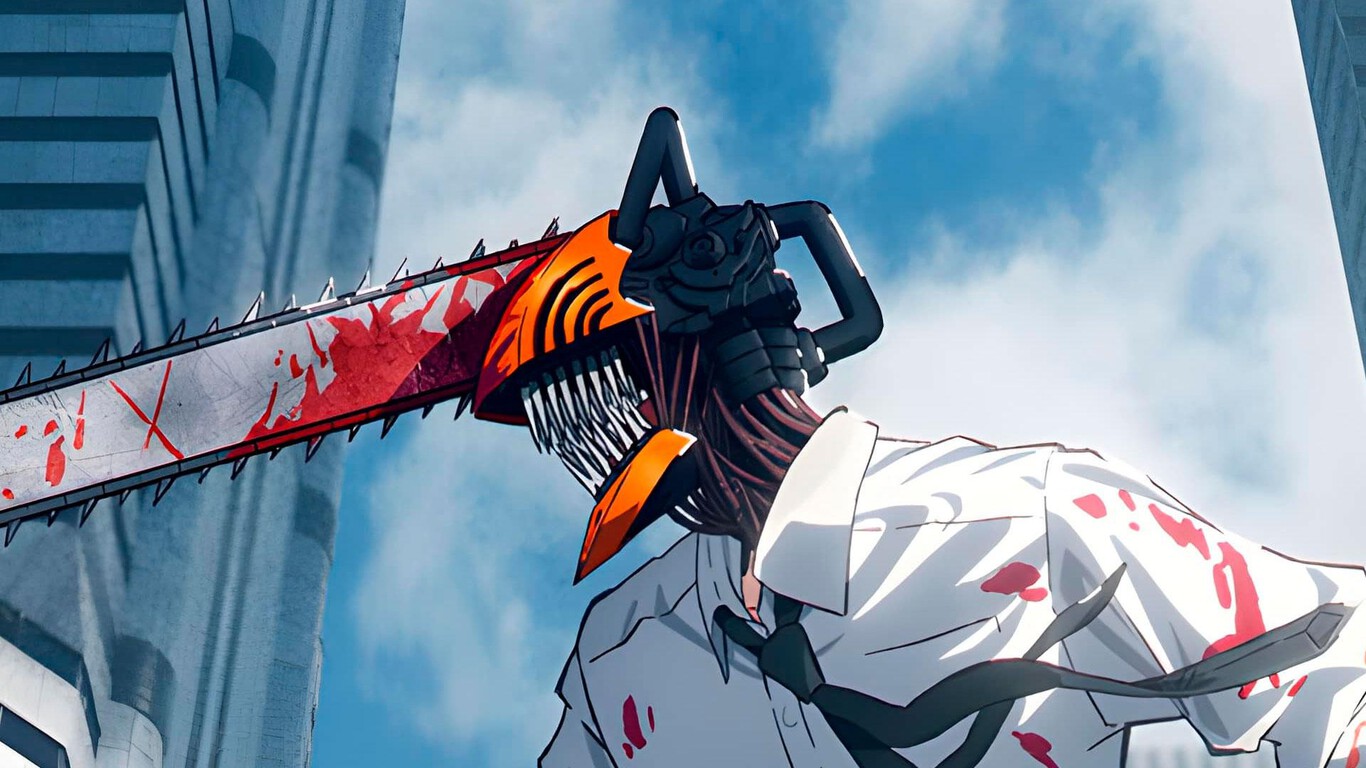 The previous episode showed Aki being strangled by the Ghost Devil. The scene opens with Aki recalling when Himeno offered him a cigarette. But took it back after Aki told her he was a minor.

To Aki’s surprise, Ghost Devil returns the cigarette after he puts it down. Aki remembers that the Ghost Devil doesn’t have eyes and marks opponents through their fear. The ghost Devil did not scare Aki at all now. 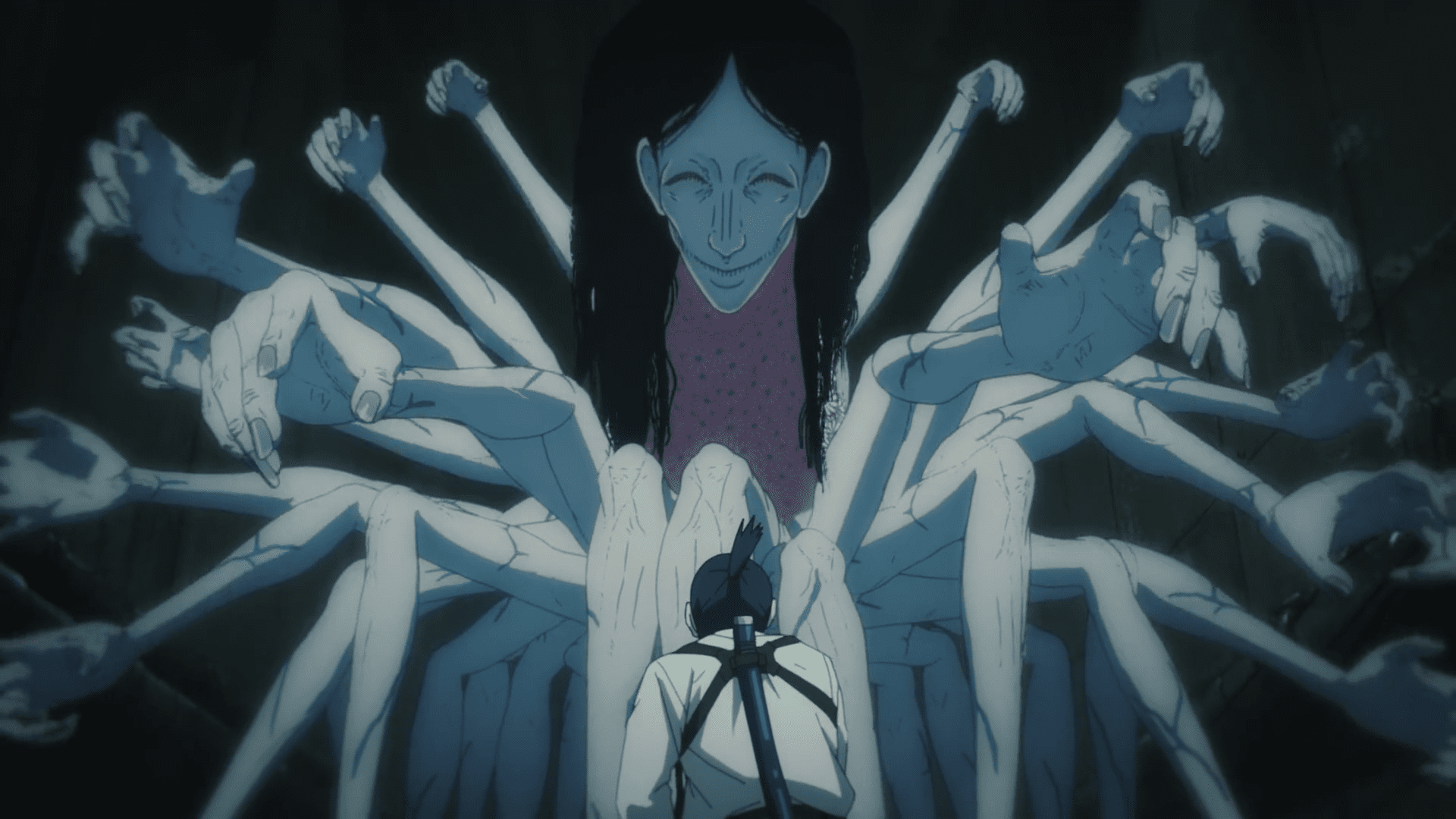 He walks towards the Devil and slices off its head. Moreover, while killing the Devil, Aki promises to see Himeno soon. At the same time, Akane tries to attack Aki, but Kobeni captures her. On the other hand, Denji and Power are in an elevator, which stops at the floor, swarming with zombies.

Denji asks Power not to disturb them, but Power challenges them to a fight. He gets baffled by the situation and lets the elevator go up, leaving her there. However, as Denji reaches the next floor, he encounters Katana Man as Denji prepares to attack him. Katana Man asks Denji a question regarding his actions. 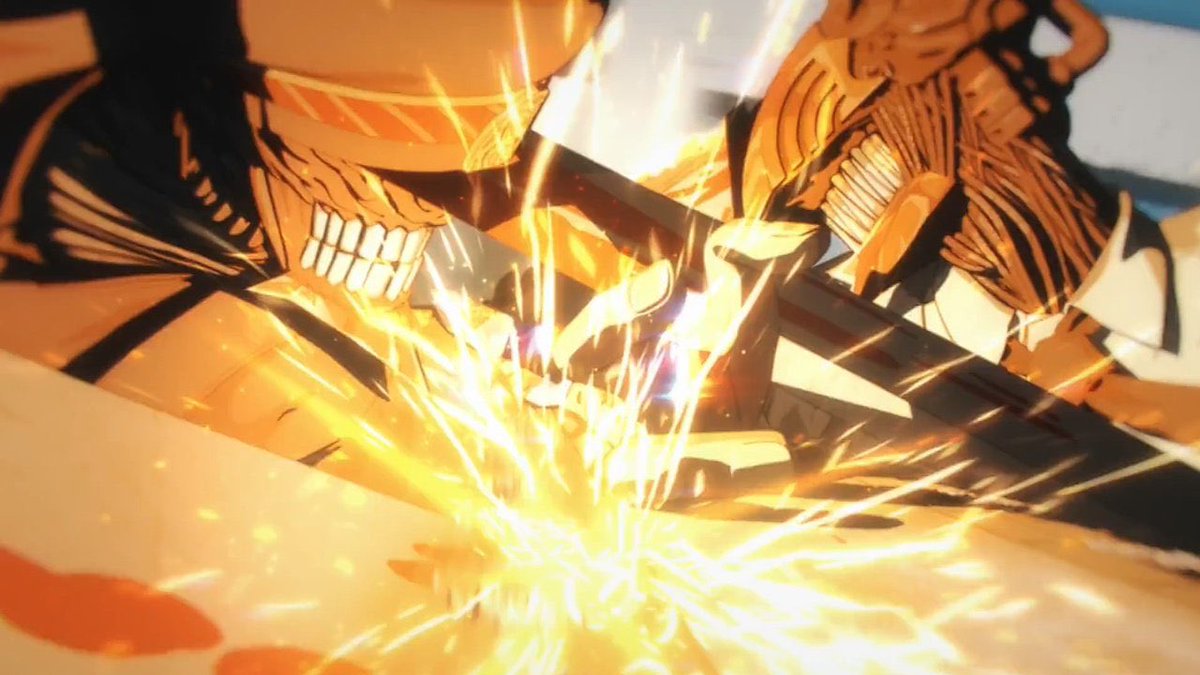 Denji tells him he feels no guilt over killing his Grandfather. Katana Man decides to fight Denji. Both the Hybrids change in their Devil forms. Denji and Katana Man jump out of the window and continue their fight across the city. However, Katana Man pushes Denji through the roof of a train.

The passengers start panicking and hit the emergency brakes. Katana Man cuts off Denji’s arms. Denji is left with only a chainsaw on its head. Katana Man can be seen getting overconfident. 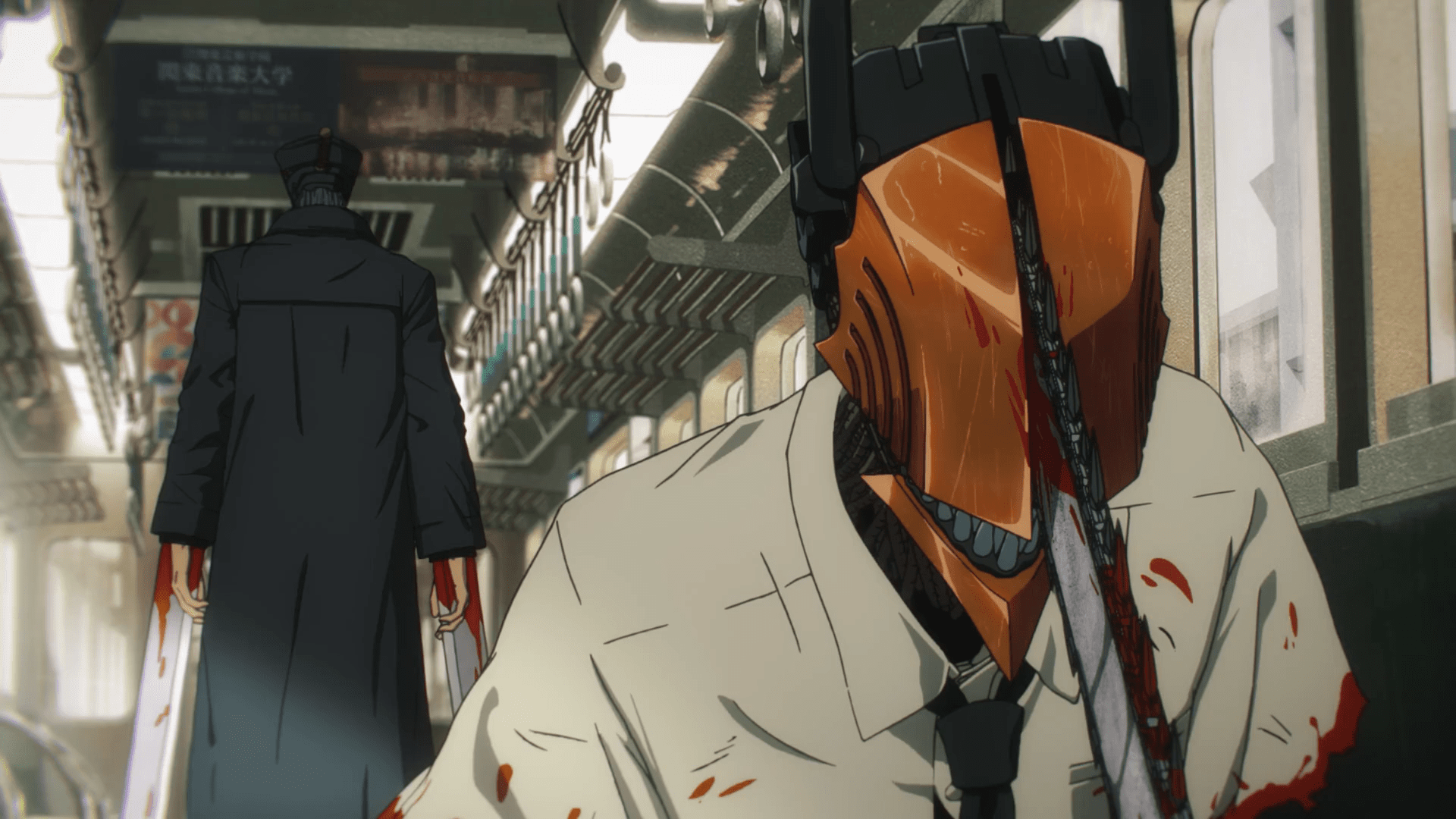 To his surprise, little did he know, Denji could summon chainsaws through both his legs. He uses those chainsaws to cut Katana Man in two halves. Denji manages to get win and captures Katana Man. At the same time, Denji waits for the police to arrive and arrest him.

Denji comes up with a plan to avenge Himeno while waiting for the police. He organizes a competition to kick Katana Man in his private parts. The person who can get Katana Man to yell the loudest will win the match. Aki arrives at the scene. Initially, he is unsure about taking part but eventually decides to take part after looking at Himeno’s cigarette. 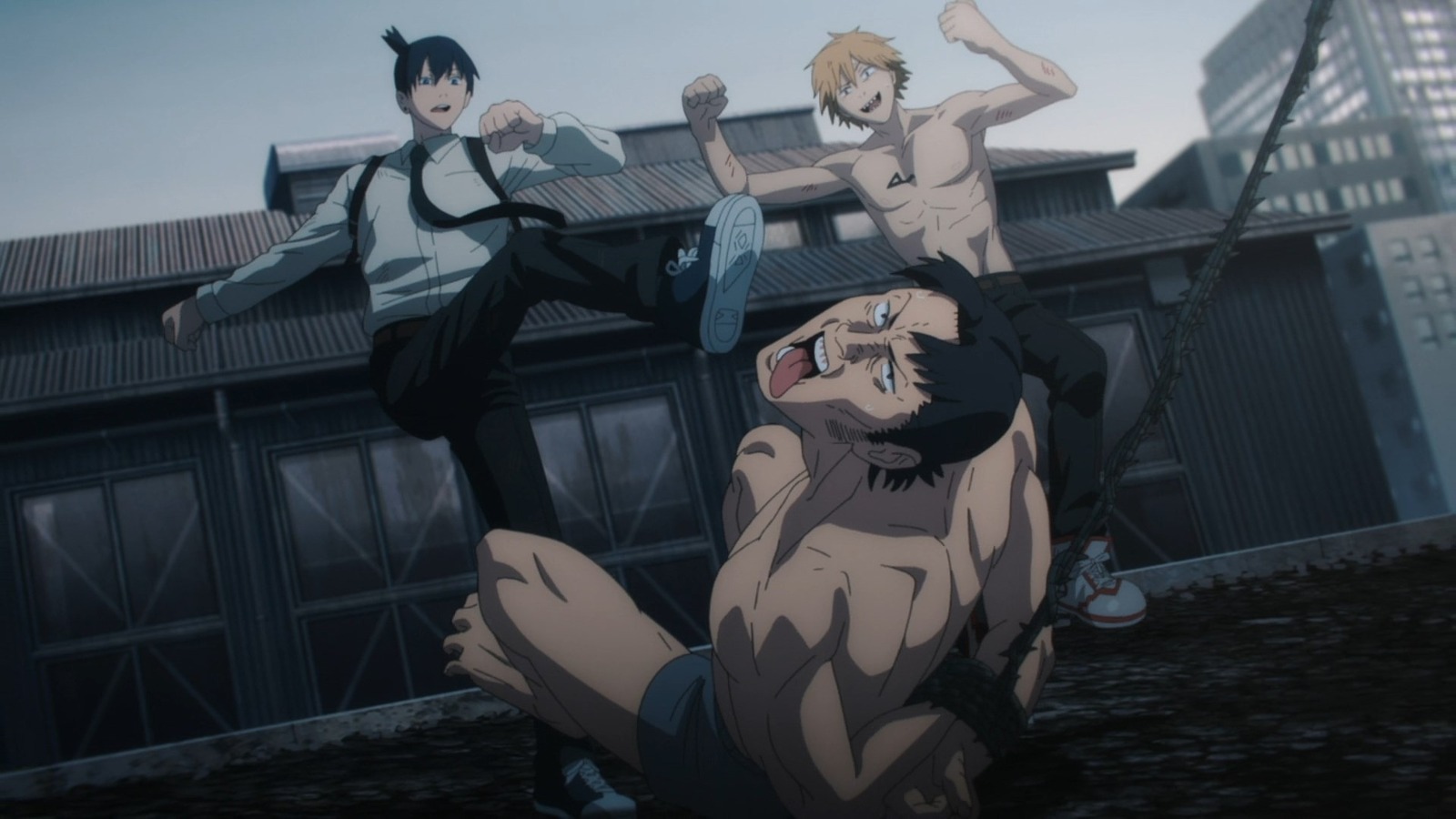 Meanwhile, Makima is seen reporting the incident to her superior. She reveals that Akane has been captured and killed by the Snake Devil, maybe because of some suicide contract. She adds that Akane was previously a Public Devil Hunter who contracted with Gun Devil to provide guns to the Yakuza in exchange for Chainsaw Devil’s heart. Before they could get more information, Akane killed herself. Makima further adds that they have found 1.4 kgs of Gun Devil’s flesh at the building. In addition to the 5 kgs that the Public Safety already possessed.

In the end, Denji, Power, and Aki are seen enjoying a free day together, shopping, and having dinner together. Aki is seen smoking Himeno’s cigarette feeling satisfied with his revenge. Denji has his recurring dream, but it’s a little different this time. 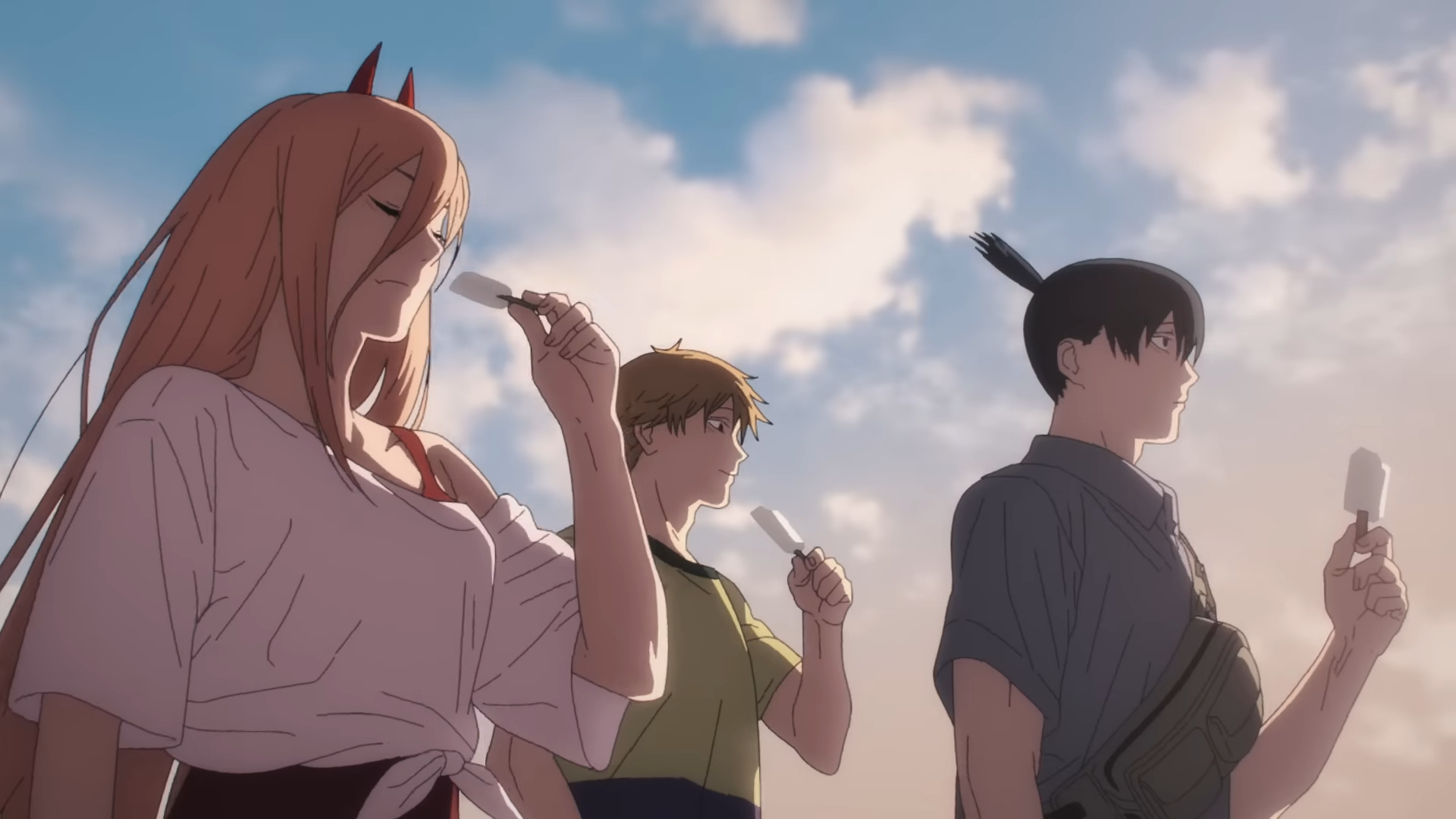 He hears Pochita’s voice asking him not to open the door that appears in front of him in his dreams. Lastly, we saw Lady Reze in the cafe she works at. This was the last episode of Season 1. No news regarding the new season has been announced as of yet.