Though Cardi B herself did not grace the BET Awards of 2022 with her presence, the record label did some ad revenue to fill the missing gap of her presence.

“Hot Shit” the latest single by Cardi B, was announced online during the BET Awards show and as a quick commercial break between Taraji P. Hensen’s outfit changes.

The Announcement of the New Single

Cardi B will be releasing her new single on the 1st of July and during the Sunday night’s BET Awards commercial, she shared a teaser for the latest “Hot Shit” single, produced by Tay Keith (Drake, BlocBoy JB).

The announcement of this new single in the commercial showed the rapper on the top of a skyscraper with the “Comming Soon” and “July 1” written all over it in neon orange font.

The name of her unrelated single was made public by her on social media and the name as we know it now is “Hot Shit.”

The announcement of this new single came in advance of the rapper’s most awaited second full-length album, which will follow the ‘Invasion of Privacy,’ Cardi’s debut album in 2018. 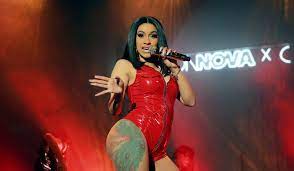 Since her debut album, Cardi has released a number of collaborations in the following years and it was last year only when she gave her blockbuster release with the tag-team with Megan Thee Stallion, WAP and Cardi’s most current feature, the drill track “Shake It” along with kay Flock, Bory300 and Dougie B. She even came out with her duet with Lizzo in 2021 in the song Rumours.’

Cardi B on Playboy’s Centerfold platform confirmed that ‘WAP’ and her 2021 track UP will also form a part of her latest album.

Though a very little official information about the rapper’s long-awaited album has been released as of now from Cardi’s statement it seems as if she is not in a hurry and wants to give her audience the best of her talents-I feel like at this point, it’s like a timeline that I created,” she told last year.

The move of announcing the new single through a commercial for the BET Awards seems to be fitting well in Cardi’s Timeline.  And as always she has kept herself in the headlines even though she was missing from the event herself. It was Last year only when she revealed her pregnancy at the BET Awards during her performance with Migos.