Calling all the Cat lovers or should I say “Kat” lovers as we have some pawful news for you!

“Call Me Kat” has a separate fan base for those who love cats and also who have a thing for our very own neuroscientist Amy Farrah Fowler, the Big Bang Theory fame.

The American sitcom based on the original British sitcom Miranda is one of the brilliant experimental sitcoms that have successfully marked their places in our TV schedules. “Call Me Kat” is undeniably one of the best things Fox produced in a while. Many of us crave a life where we just sit around playing with our furry friends all day but Mayim Bialik gets to live that dream in the sitcom “Call Me Kat”.

With the series wrapping its second season on 5th May, fans are wondering where the “Cat Cafe” takes us. Here’s everything you should know.

“Call Me Kat” Gets a Greenlight for Season 3 by Fox

Yes, you heard that right. The Cat Cafe is going to stay for a while as the production network Fox has decided to bring back their furry friends for another season.

The network knows hows hard it is to wait for such an amazing show, especially with those little kitties sitting around in Cat Cafe.

Call Me Kat is centered around the life of Kat who is a 39 year old single woman who lives alone by her choice. 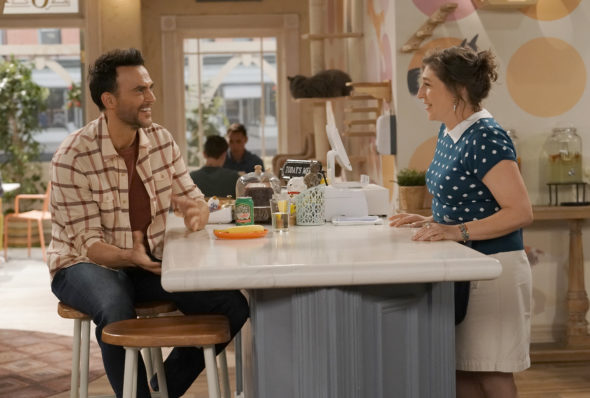 Kat is pressurised by her parents to get married like any other woman but she decides to put her career before marriage and open a cafe called “Cat Cafe”.

Everything’s going great until Max steps into her life and the fun starts to begin.

After how things ended in season 2 where Kat seems happy with Max leaving for Paris.

Fans thoughts that was it for the show to wrap the sweet story but who doesn’t want another season filled with pawful narrative and the amazing presence of Mayim Bialik.

The multi cam comedy stars Mayim Bialik in the lead role of Kat. Along with that the series stars Swoosie Kurtz as Sheila, Cheyenne Jackson as Max, Kyla Pratt as Randi, Julian Gant as Carter and Leslie Jordan as Phil. The series is created by Miranda Hart and developed by Darlene Hunt who also serves as the executive producer along with Mayim Bialik, Jim Parsons, Todd Spiewak, Miranda Hart, Angie Stephenson, Alissa Neubauer, and Beth McCarthy-Miller. The show is produced by Sad Clown Productions and BBC Studios.

After season second’s ending where Kat and Max leave for Paris happily, the show indicates a happy ending until there comes a line at the end “See you in three months” that obviously gave hope to bring back the sitcom for another season. The series is expected to continue right from where it left off.

Here you go! This is all to feed you before getting ready to welcome your furry friends in Call Me Kat season 3.