Ana de Armas plays American actress Marilyn Monroe in this biographical fictional movie about her career and life. Along with changing aspect ratios, the majority of the movie is shot in black and white, with some scenes in color.

The movie premiered in the United States on September 16, 2022, before its streaming release on September 28, by Netflix. It explores the rise to stardom and the unbelievable downfall of actress Marilyn Monroe, one of the world’s greatest talents.

Along with the storyline, spectators are interested in the songs featured in this biopic. Let’s look into that. 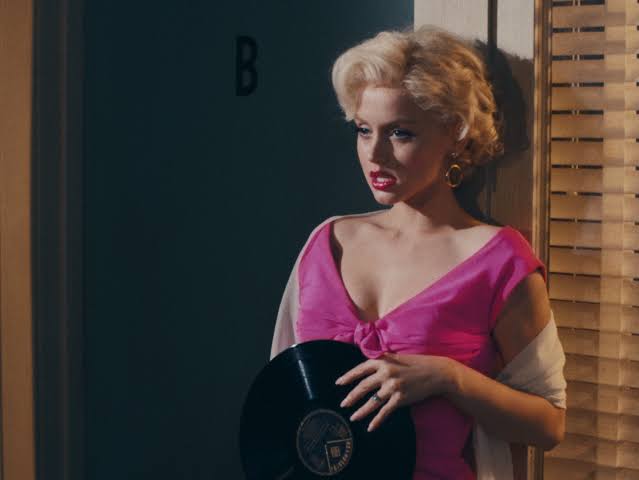 All The Songs Featured In Marilyn Monroe’s Biopic

The score was composed and executed by Nick Cave & Warren Ellis, with the tracklist slated for release on September 28, 2022. If you were curious, here’s the ideal guide. It seems that you will also add some songs to your playlist.

Kiss By Marilyn Monroe [from Niagara]

Rose and Patrick By Sol Kaplan [from Niagara]

Strangled By Sol Kaplan [from Niagara]

Bright Horses By Nick Cave and the Bad Seeds

I Wanna Be Loved By You – Bert Kalmar, Harry Ruby, and Herbert Stothart By Marilyn More [from Some Like It Hot]

La Cumparsita By Gerardo H Matos Rodriguez, Enrique Pedro Maroni and Pascual Contursi [from Some Like It Hot]

Runnin’ Wild By Arthur Gibbs, Leo Wood, and Joseph Grey [from Some Like It Hot]

Here are more songs that you could listen to:

I Love Love Love You All – Nick Cave & Warren Ellis

The official synopsis reads, “Blonde boldly reimagines the life of one of Hollywood’s most enduring icons, Marilyn Monroe. From her volatile childhood as Norma Jeane, through her rise to stardom and romantic entanglements, Blonde blurs the lines of fact and fiction to explore the widening split between her public and private selves.”

Dominik described the movie as “more accessible” than his previous works, and disclosed that his screenplay enclosed “very little dialogue,” preferring to create an” avalanche of images and events.”

Dominik remarked, “It tells the story of how a childhood trauma shapes an adult who’s split between a public and a private self. It’s basically the story of every human being, but it’s using a certain sense of association that we have with something very familiar, just through media exposure.

It takes all of those things and turns the meanings of them inside out, according to how she feels, which is basically how we live. It’s how we all operate in the world. It just seems to me to be very resonant. I think the project has got a lot of really exciting possibilities, in terms of what can be done, cinematically.”

Did you also like the soundtrack of the movie? You are welcome to drop your opinions in the comment section below. And you can even stay tuned with us for more updates.