The biggest battle of the Black Clover manga is finally over or is it? In Black Clover Chapter 329, we see the aftermath of the battle between Lucifero and Asta. 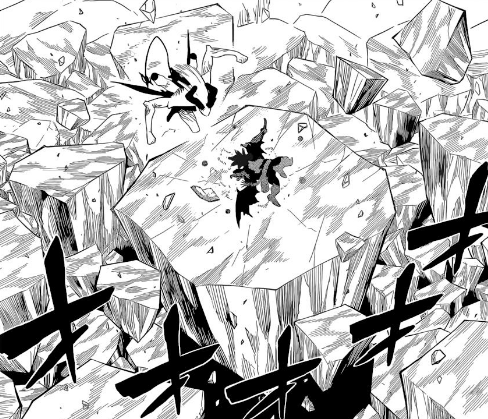 Finally, Asta and Liebe have taken the revenge they have waited for so long, finishing off the reason for so many people’s death and the one who took Lucita away from Liebe all those years ago.

When is Black Clover Chapter 329 Coming?

The next chapter for this wild journey of Asta becoming the Wizard King continues next week on 8 April 2022 and you can read it for absolutely nothing through the official Viz Media website.

The Spade Kingdom Arc might seem like this over but we all know the cliche story of the true villain not being the last boss but our heroes have used up all of their energy, how will they succeed? which might be the case for Black Clover Chapter 329.

Asta and Liebe Vs Lucifero

At the beginning of the chapter, we see the clash between Asta and Lucifero continue, as Asta charges forward toward Lucifero, jumping on every big chunk of rock that Lucifero was throwing at him.

As we saw in the last chapter, Lucifero’s magic does not affect the recently perfected version of the devil union between Asta and Liebe. The devil union comes after Asta understands the pain that Liebe had gone through in the demon world and even after meeting Lucita, Lucifero took that away from him.

The Story of Lucita

This whole chapter is flashbacks of Liebe’s time with Lucita and the relationship that Liebe and Asta share, Asta’s mother being Lucita and Liebe’s foster mother being her as well. Lucifero is the one who took her away from the both of them, so the devil union grows stronger through the hate they share. 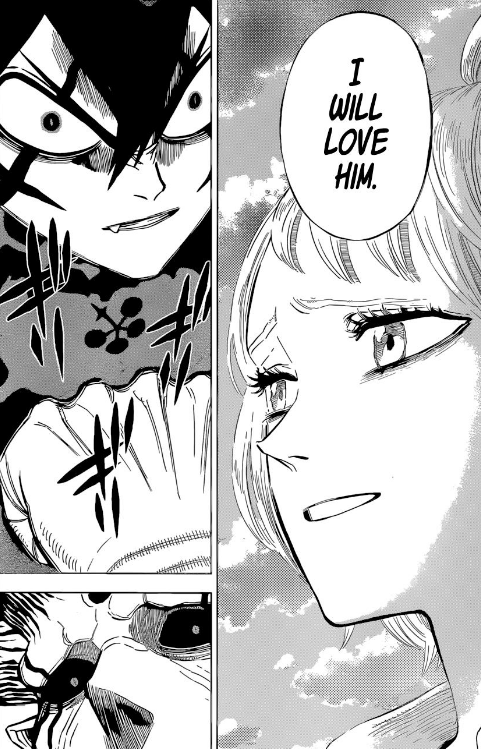 The chapter has Liebe recalling the story of Lucita leaving her child and living her life alone as she is scared she’ll be the reason that all of the baby’s magic powers will be taken away from it.

Meanwhile, on the battlefield, Asta and lucifero go all out as they come closer and closer. In the flashback, Lucita talks more about the child that she has left behind, though she might be a bad mother for leaving that child, she will always and forever love it.

As the chapter moves forward we have this beautiful panelling with Asta and Lucifero on the left while Lucita is on the right, confessing that all the time she was away from her baby she still loved it, even more than herself. This creates this dynamic that speaks to the power that Asta and Liebe have gained till now.

And in the next page itself, Tabata connects Liebe, Lucita, Asta and Lucifero in this final fight, raising the stakes even higher. Lucita had to fight with Lucifero in a tug of war to keep hold of Liebe when he was being dragged back into the demon world which lead to this moment of Lucifero eating the defeat of his lifetime. 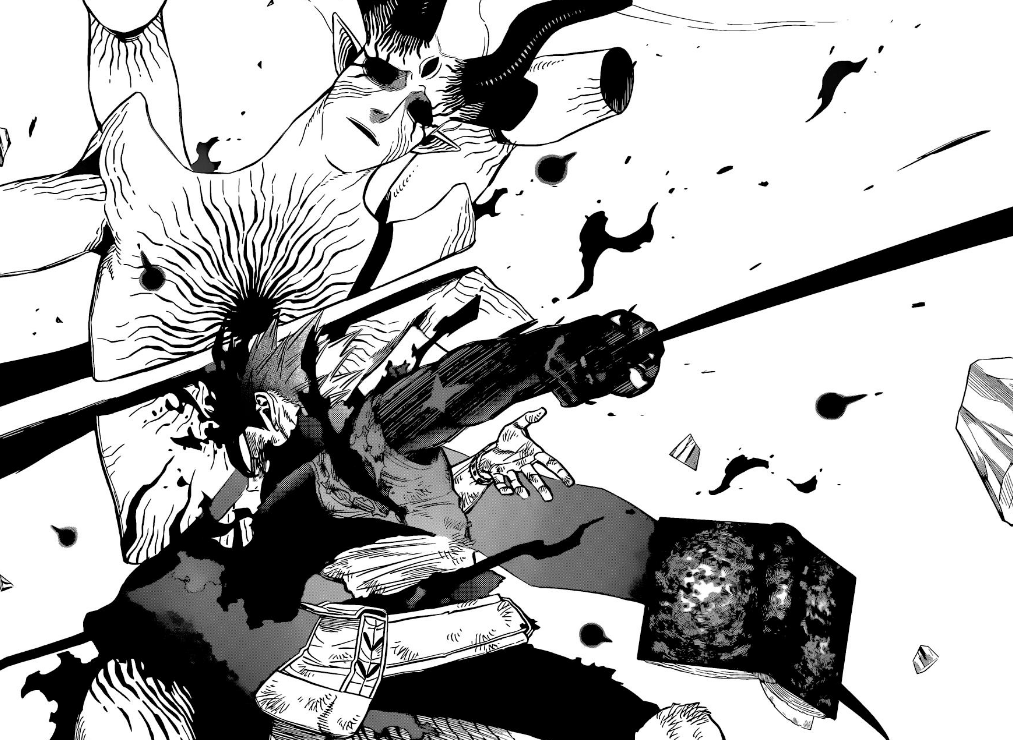 What follows is an excellent display of panelling in a shounen manga, with each page representing each slash that Asta slices through the body of Lucifero. First, it is the right hand, then it is the left hand as Lucifero tries to punch him.

And the battle ends with one slash across the chest of Lucifero, slicing him off into two and Asta and Liebe standing on top of him.

While this might feel like a conclusive victory for the magic knights and the final battle for this arc of Black Clover but Tobata just might pull a ‘this was just a prelude to the final boss’. But if he does that or not you can be sure to catch up on the next chapter on The Teal Mango.