A Look at Sofia Vergara and Joe Manganiello’s Relationship Timeline

Sofia Vergara and Joe Manganiello are one of the sweetest couples in Hollywood. These two lovebirds got engaged after just six months of dating. That’s pretty quick but they say you know when you have found the one and they certainly knew that their love was meant to last forever.

It’s been seven years since the duo crossed paths for the first time and they still look madly in love with each other. Read on to catch deep insights into the whirlwind romance of Sofia Vergara and Joe Manganiello. The duo met each other for the first time in May of 2014 at the White House. At that point, Sofia was engaged to another man but maybe destiny had some other plans for the Hollywood actress.

Soon afterward, the Modern Family star and her ex-fiancé Nick Loeb called it quits and by June of 2014 Sofia was single. That’s when Joe entered the picture and the two of them began dating. The couple met each other for the first time in May of 2014 at the White House Correspondents’ Dinner. At that time, Vergara was still with her ex-fiancé Nick Loeb. In the pictures from the event that popped on the internet, Joe was seen checking out Vergara.

During a 2014 interaction with E! News, Joe spilled the first beans on the pair’s meeting and he said, “Yeah, I totally got busted. That was actually funny when we first started dating, months after that. We had talked I guess, or kind of bumped into each other, but we didn’t start dating until she was single.” Manganiello further added, “I mean, she had a boyfriend at that time, so I probably could have got in a fight for doing that. I’m not trying to start a fight at the White House.”

After Sofia and Nick split, Joe allegedly approached Vergara’s Modern Family co-star Jesse Tyler Ferguson to get her phone number. They went on their first date secretly and Sofia was a little bit hesitant as she had just come out of a serious relationship.

Let’s tell you a funny story, on the pair’s first date, Vergara was trying to convince both of them that this wouldn’t work out, but it worked out All Too Well. In an interaction with Haute Living in 2015, Joe told “Our first date was her giving me every reason why it would never work out. Like, ‘You’re too young, you’re an actor, you’re this, you’re that,’ and she was just doing it to hear herself say it. She was trying to talk herself out of going there.”

Sofia and Joe hit it off and for the next couple of months, the air was filled with the dating rumors of these two lovebirds. Soon afterward, Vergara confirmed the relationship rumors between the two in August.

During an interaction with Extra in August 2014, the Colombian actress confirmed that she was off the dating market and she was seeing someone in her life. She said, “You know, I’m just having a great time. It’s a special time in my life, and I’m trying not to think too much about it.” Sofia further added, “It’s something very new, so we will see what happens.” She also told the media outlet that her family also gave a green signal to her romance. She continued, “What is there not to approve of?”

November 2014: They move in together

Sofia and Joe marked their first Thanksgiving as a couple by taking their relationship to the next level. They moved in together in November of 2014. She confirmed the same on The Ellen DeGeneres Show.

While making an appearance on The Ellen DeGeneres Show, the Hot Pursuit star jokingly said to Ellen, “I left him home packing my things. We’ve had help, and he’s doing his stuff. He has a lot of books that I don’t know where I’m going to put.” Vergara further added, “We have a wine cellar and I was like, ‘Oh, maybe that’s where we should put them instead of wine.’ He doesn’t want to put them in storage!”

Around the same time, Joe was spotted out and about at a jewelry store in L.A. which fueled the engagement rumors of the duo. He planned a beautiful proposal for the love of his life. He set up everything on the beach during a trip to Hawaii over the holidays, and let us tell the paps nearly spoiled his plan but he ended up changing his plan last minute.

Joe proposed to Sofia on Christmas Eve in the couple’s suite. In a 2015 interview with Haute Living, he spilled the beans on their proposal and said, “Our first date was in June, and then I proposed to her on Christmas Eve; [we dated for] about six months. When you know, you know, and we knew right away—like, very quickly.” 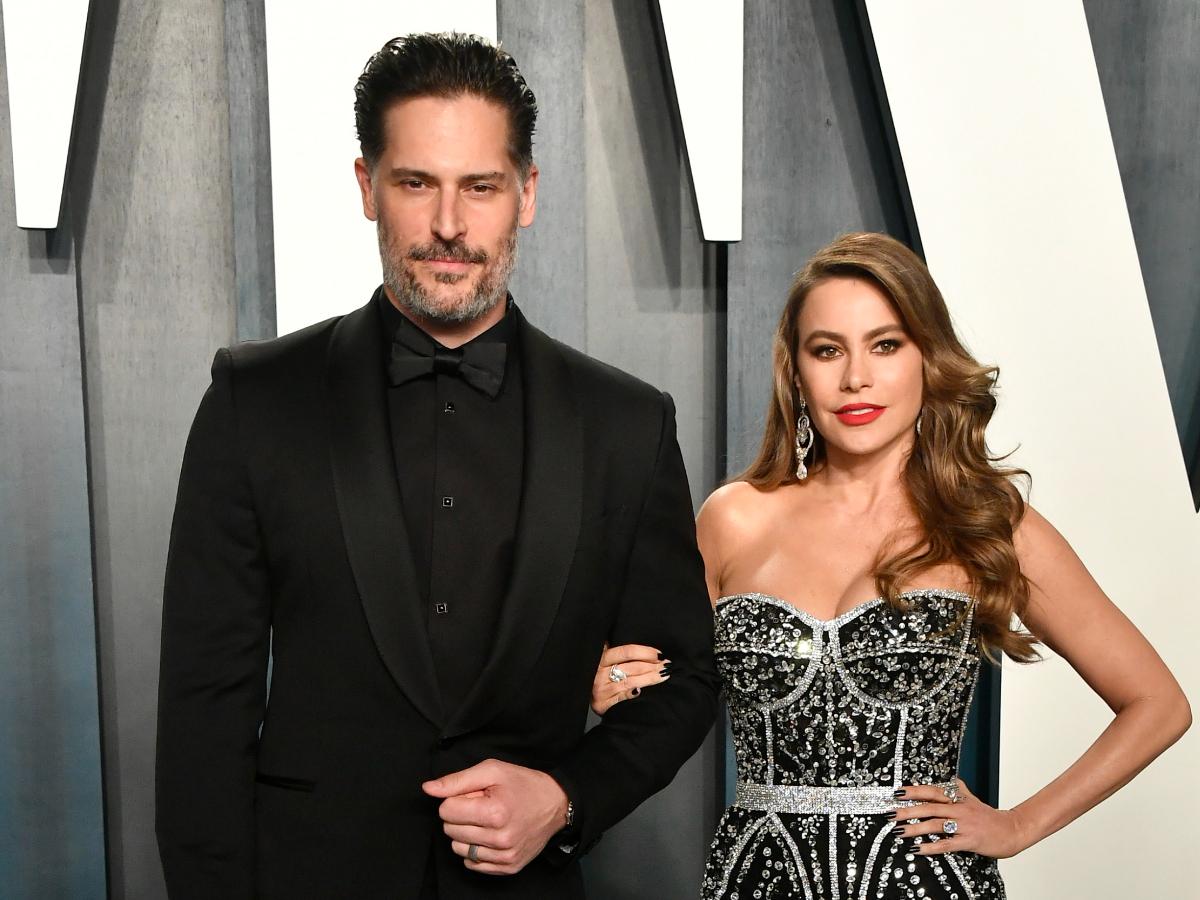 Manganiello continued, “We had this big bay window [that I opened up], and the sun was going down pink over the mountains and over the bay, and I had this ring. I had looked at every ring in the world, and this is the ring that I wanted. I had a whole speech prepared in Spanish. I proposed to her on one knee in Spanish with the sun going down. It was awesome.”

These two lovebirds got married on November 21, 2015, just a year after moving in together. They exchanged their vows at The Breakers in Palm Beach under an extravagant floral arch.

Their wedding was a star-studded affair. Their grand and lavish wedding was attended by nearly 400 guests including some of Sofia’s Modern Family co-stars. 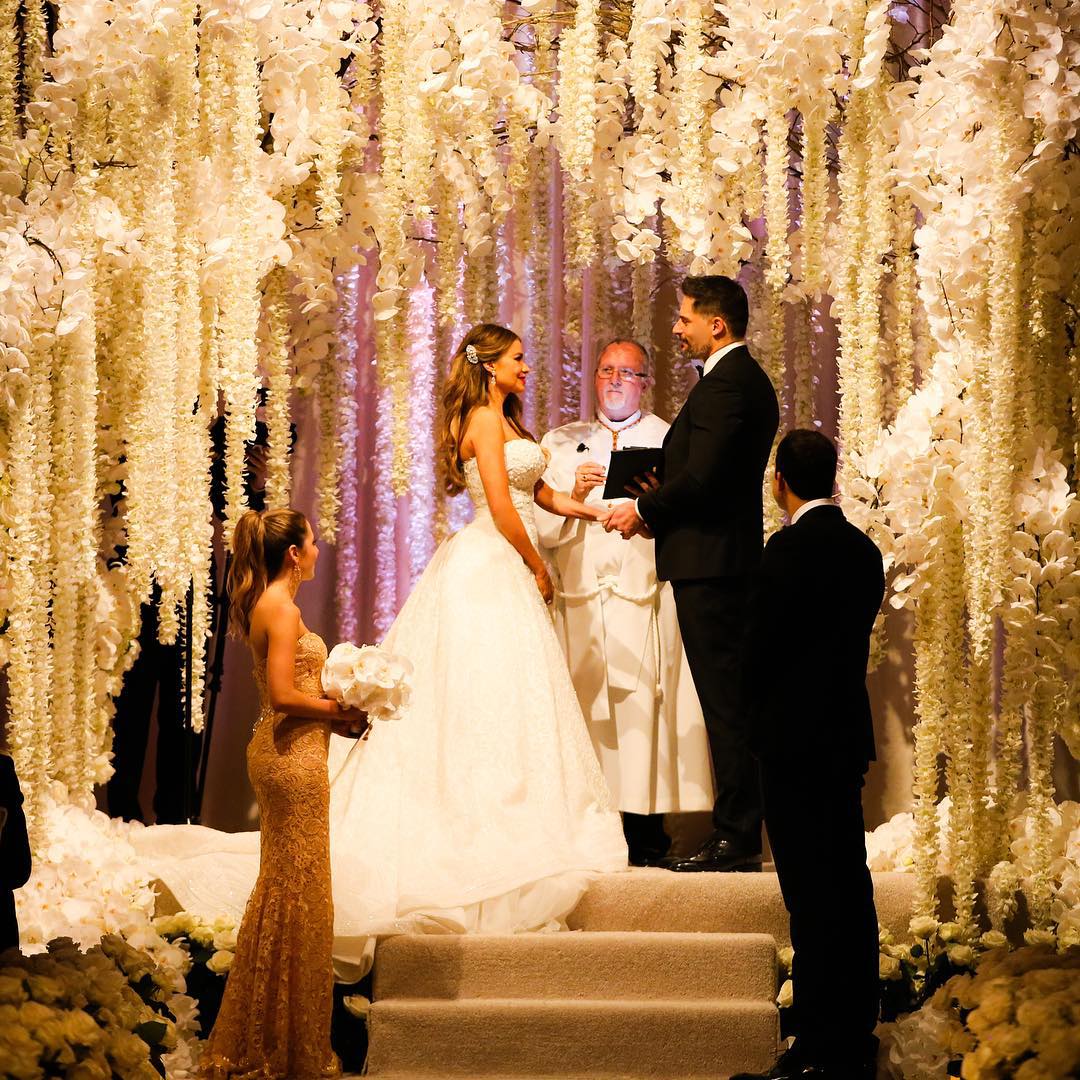 For her special day, Sofia opted for a stunning Zuhair Murad ball gown and she looked gorgeous as ever. On the other hand, her husband Joe looked quite dapper in a classic black tux.

December 2015: Sofia and Joe leave for their honeymoon

After getting married, the newlyweds spent their honeymoon in Turks and Caicos. The two of them resided at the Parrot Cay Resort. The pair had a good time as they chilled on the beaches and basked in the sun. They were in wedded bliss.

The couple celebrated their sixth meeting anniversary in June of 2020. Isn’t that sweet? Sofia shared a beautiful picture of herself and her hubby on the social media platform Instagram to mark the special occasion.

“6 yrs since u went and found me!!!💖💖happy anniversary @joemanganiello 🌹U r mine!!!!💘💘💘” she wrote alongside the lovey-dovey photo of the pair. 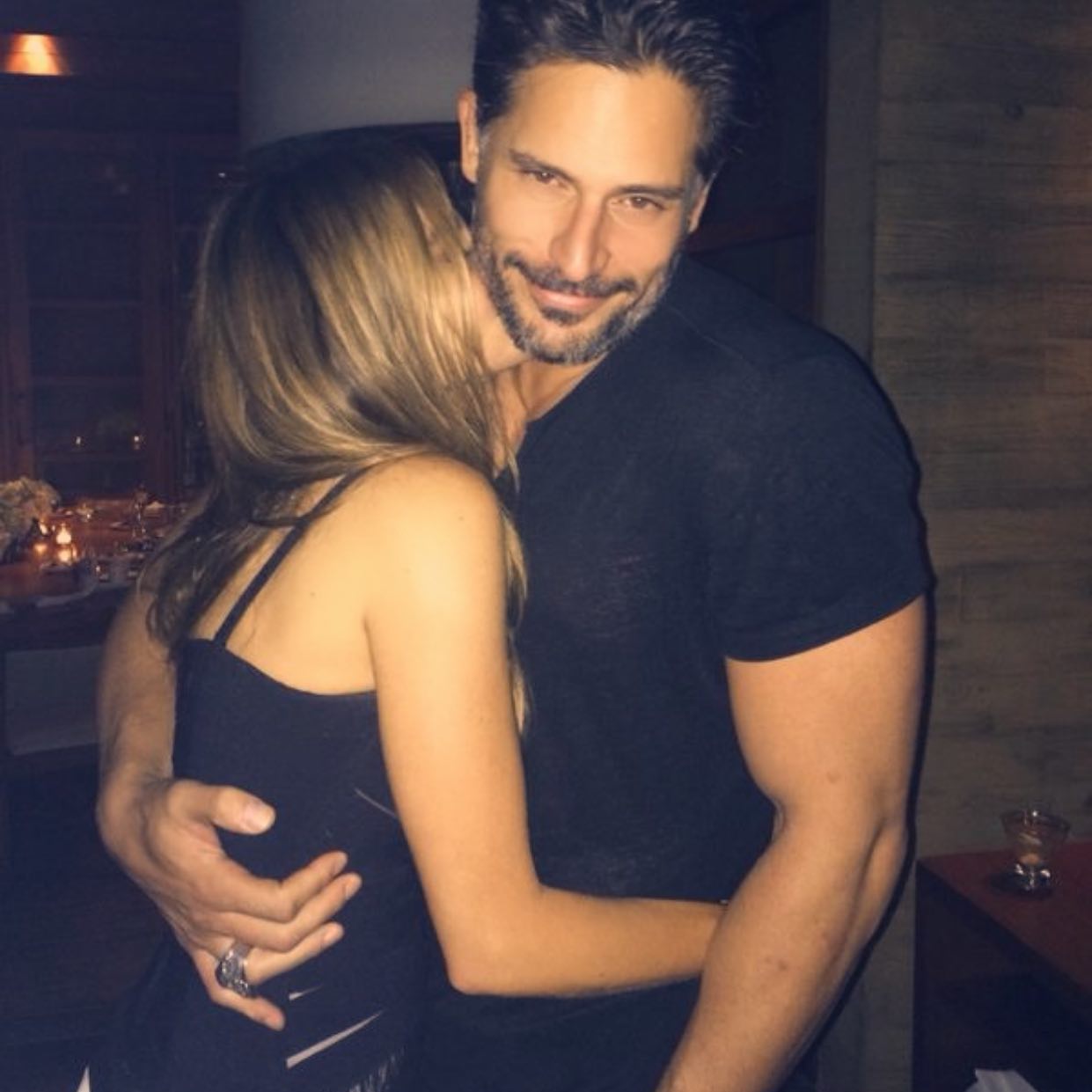 Due to Covid-19, the pair had to celebrate their anniversary at home, but her kid made sure to make it extra special for the couple by organizing a dinner date for them.

And within the blink of an eye, Sofia and Joe were celebrating their fifth marriage anniversary. They recalled and reminisced the special day by taking a look at the moments from the big day.

Vergara shared a series of pictures of the couple from their wedding day on the social media platform Instagram. “Feliz 5th anniversary!!!” she wrote in the caption of the post. 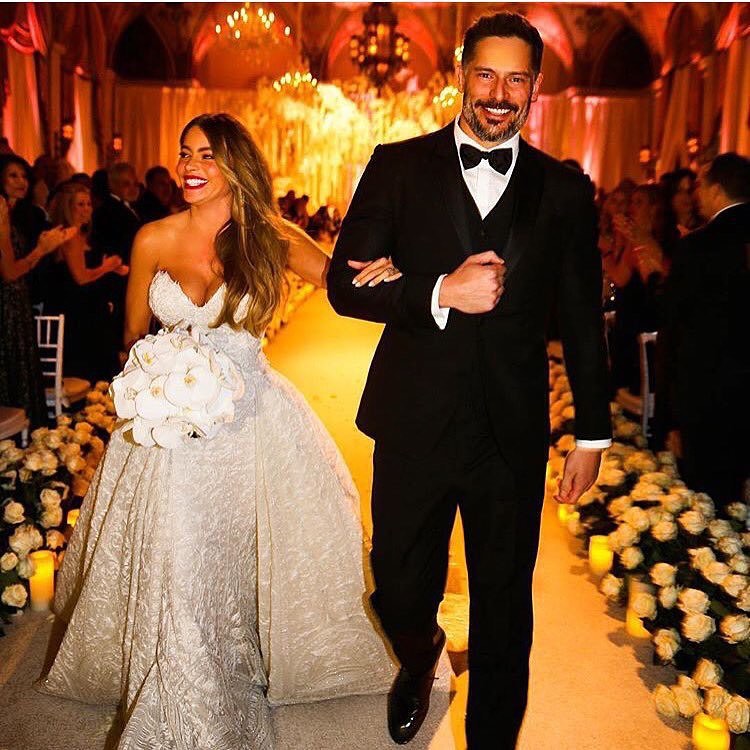 Last year, on the occasion of Valentine’s Day, Sofia posted a cozy photo of herself and Joe on Instagram. The two of them were seen all cuddled up in the snap. She dropped a couple of heart red emojis in the caption of the post.

Meanwhile, Joe also put up a beautiful picture of his wife looking far in the distance on his Instagram profile. He penned down the caption in Spanish for Sofia that read, “¡Feliz día de San Valentín a la mujer mas bella del mundo!” when translated into English, it means, “Happy Valentine’s Day to the most beautiful woman in the world!” 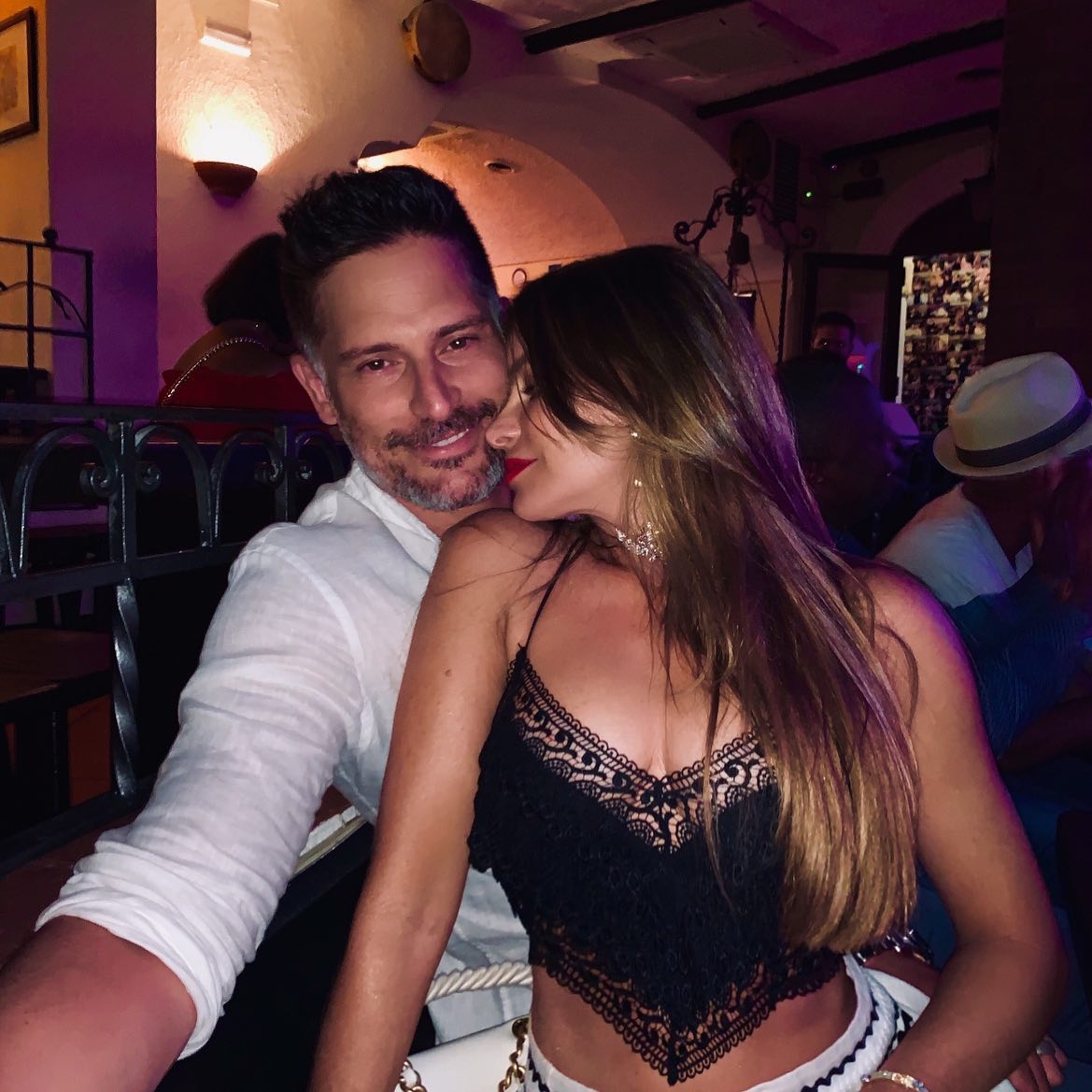 Sofia commented on the picture, “[email protected] @cdvergara and others for our surprise [anniversary] dinner date in quarantine.”

This year, in March, Joe and Sofia hit the red carpet of the Vanity Fair Oscar party. For the event, Sofia stunned in a champagne gown with a tulle wrap. Manganiello looked dapper in a classic tuxedo and bowtie with matte black dress shoes. 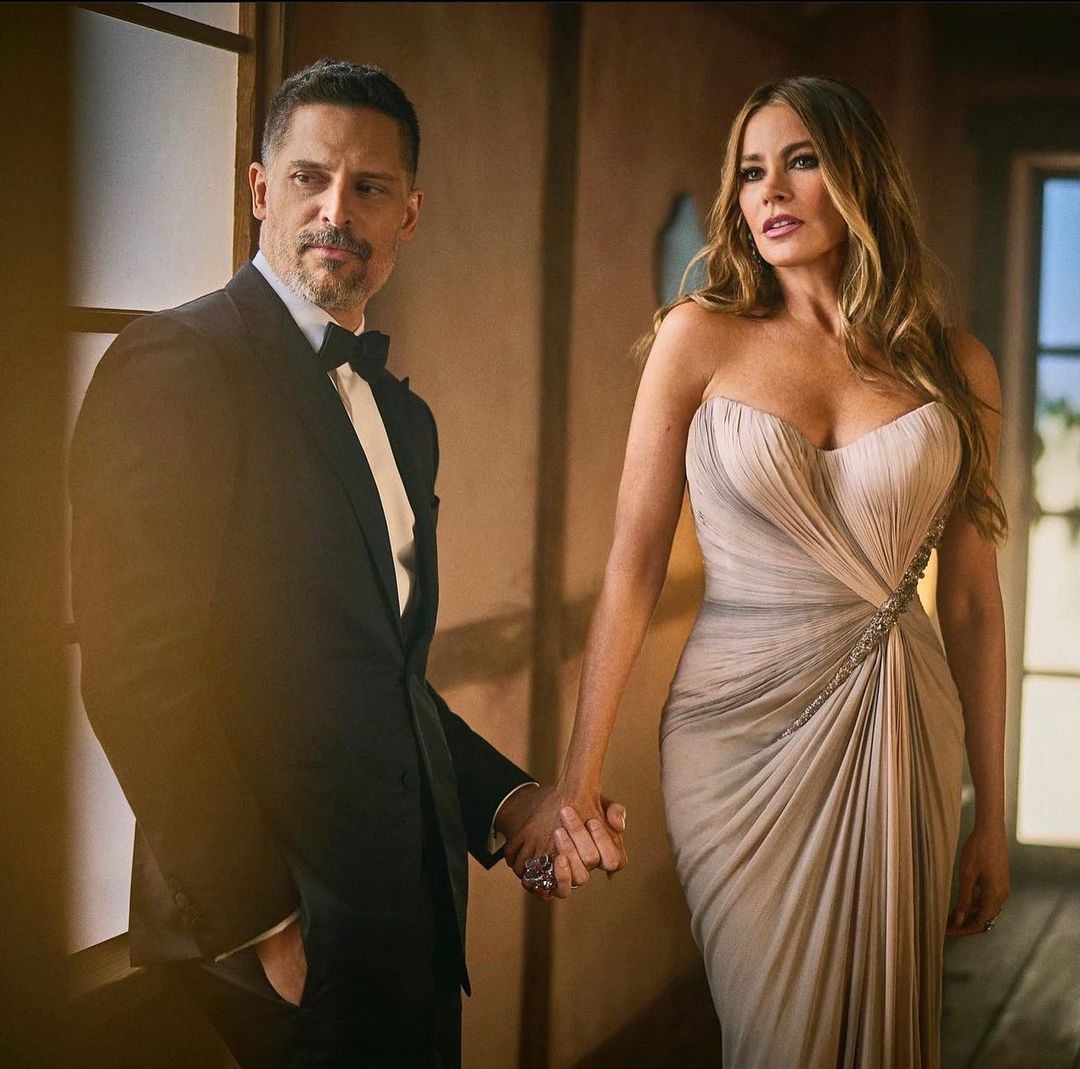 Sofia celebrated her 50th birthday on July 10 and her handsome husband Joe didn’t forget to wish her on social media. He posted a carousel of pictures of himself and Sofia on the social media platform Instagram with a sweet caption.

“¡Feliz Cumpleaños mi amor!” he wrote alongside the slideshow of pictures which translates to “Happy Birthday my love” He further added, “I love you so much” 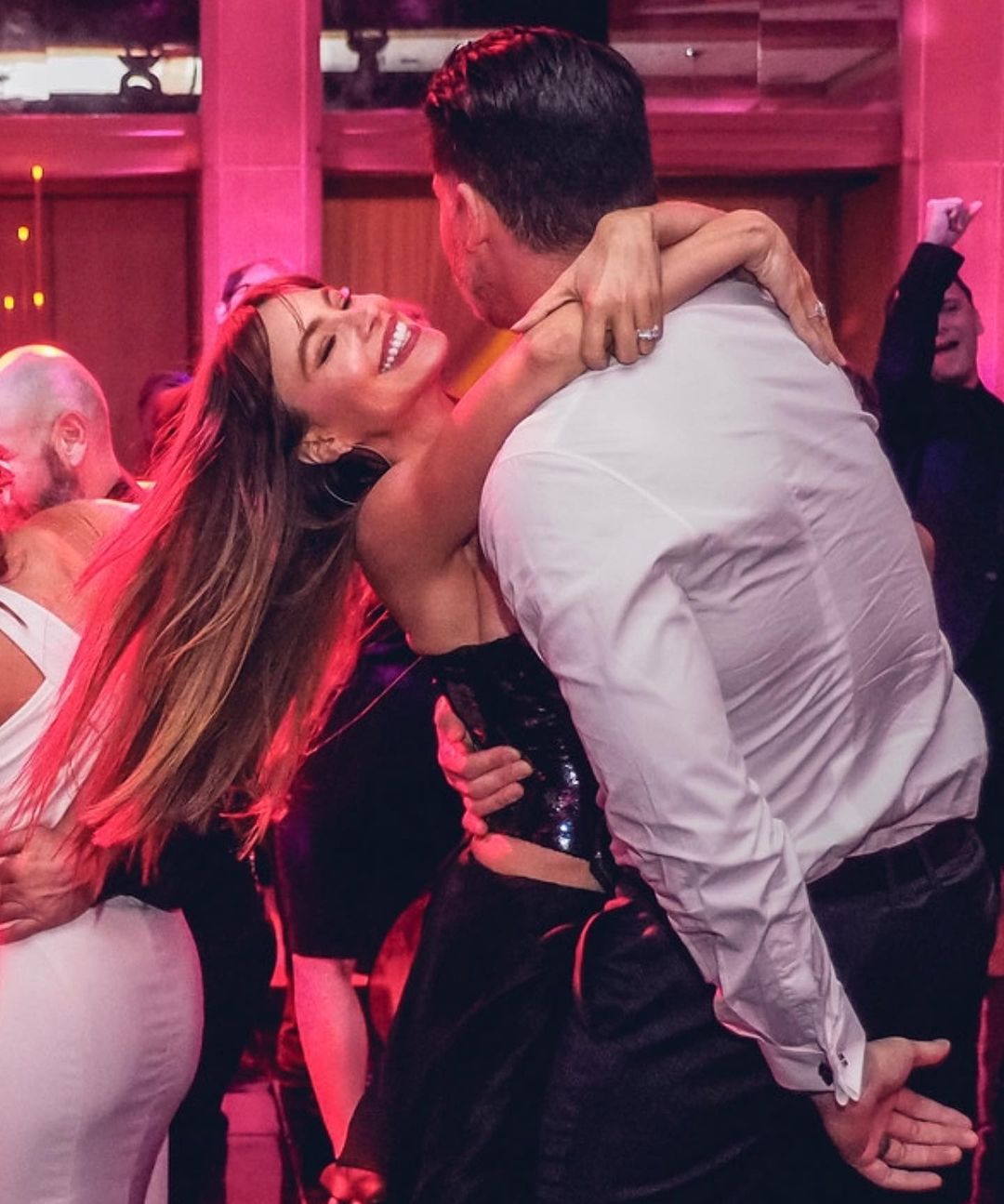 We must say Sofia Vergara and Joe Manganiello are a match made in heaven. These two lovebirds make us believe in love. Don’t forget to stay tuned with us for the latest updates from the world of showbiz.