We know you are all curious to learn more about the love story of Don’t Look Up star Leonardo DiCaprio and Camila Morrone. Continue reading to catch deep insights into the whirlwind romance of these two. All About the couple’s latest outing

Leonardo and his girlfriend Camila were recently snapped together in public. They were seen taking a sandy stroll at a beach in Malibu over the weekend. The two lovebirds seemed comfortable in each other’s company as they held hands and looked into each other’s eyes while walking.

At one point, the American model looked a little stressed and she was seen making a furrowed facial expression and grand gesture with her hand but her beau listened to her with all his attention. Leonardo even gave her a forehead kiss to calm her down. For their outing, the pair opted for baggy and muted colored clothes. Camila wore a beige crewneck sweater over a translucent caftan cover-up. She topped her look with a white choker. On the other hand, Leonardo sported a tan drawstring shorts with a plain white T-shirt. He completed his look with a baseball cap and a pair of black sunglasses.

When did Camila and Leonardo spark dating rumors?

The Wolf of Wall Street actor was spotted out and public with Camila for the first time in the year 2017. When it comes to their romance, there is one thing that became a topic of discussion among the audience.

Leonardo and Morrone have an age gap of 23 years between them. At the moment, the actor is 47 years old while his girlfriend is 24 years old. They say it right love knows no bounds. Us Weekly reported that Camila and the Hollywood star were hooking up. The dating rumors of these began going around in circles months after Leonardo’s split from model Nina Agdal.

Nearly a month after their first spotting, Leo and Camila went for a snowy vacation in Aspen, Colorado. According to the reports of People magazine, the Titanic actor’s close buddy Tobey Maguire also joined the pair along with his two kids. 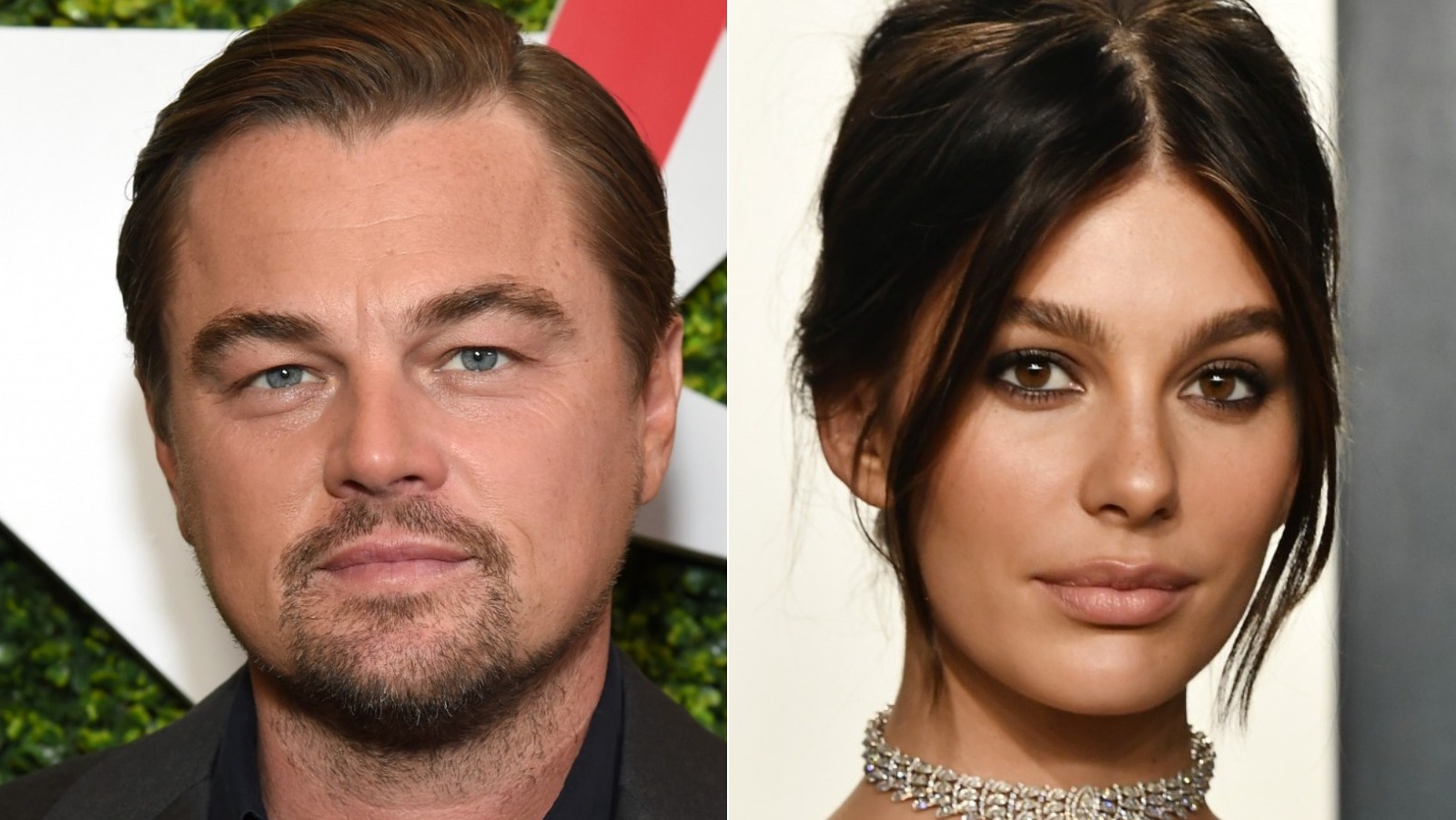 The couple shared a PDA moment in Los Angeles. During an outing in March of 2018, Camila held Leo’s hand and the two were caught displaying a rare PDA in public.

The couple went on another vacation. In August of 2018, the pictures from Leo and Camila’s getaway were published by E!, in which they were snorkeling and going on boat rides together. 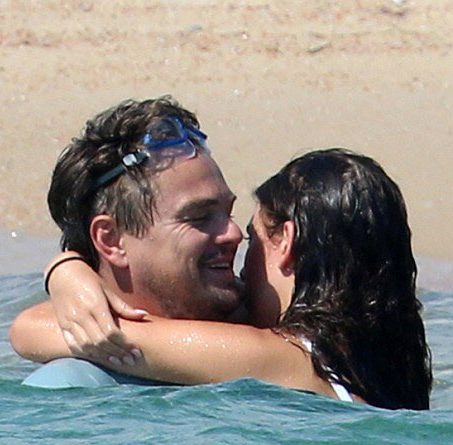 A close source told the media outlet, “Leo and Camila have been out in the sun enjoying boat rides, snorkeling, and being in the sea. They’ve had several meals aboard the yacht but have also made plenty of stops and gotten off to see the sites and enjoy the best places.”

The insider further added, “They visited the island of Capri and had a nice lunch at Il Riccio overlooking the water. They have a smaller boat that drops them and brings them back to the yacht.”

The pair attended the UEFA Champions League, Group C match, in Paris. During the same month, E! reported that the two were getting more serious about their relationship.

A source said, “It is getting more serious. They’ve been inseparable for the last year and are crazy about one another. They’ve gotten to know each other’s families and they love being together.” Another source added, “He is very serious with Camila and has been for a while now, but marriage is not something that is on the horizon.” At the same time, an insider from Us Weekly opposed E!’s source and said, “They’ve talked about getting engaged.”

Leo and Morrone attended Coachella together. As per the photos obtained by Daily Mail,  the couple was seen having a good time and they even engaged in some subtle PDA at the three-day music festival.

The pair headed to the Cannes Film Festival. It was at this film festival that we got that viral meme of the actor. Leo and Camila attended Cannes but both of them were seen at separate events and we did not get any pictures of the two lovebirds together.

Camila makes an Instagram post that subtly hinted at her relationship with DiCaprio. She dropped a photo of Hollywood couple Lauren Bacall and Humphrey Bogart on the social media platform Instagram. Lauren and Humphrey had a 25-year age gap. She simply captioned the picture, “A love like this.”

Fans began assuming that the model is referring to her large age difference from DiCaprio with the Instagram post. Soon afterward, she addressed the critics.

Camila took to her Instagram Story and said, “My God, people are so mean and full of anger with people that they know nothing about. I guess I just hope on this Friday that people learn to live with a little less hatred and place their time and interests elsewhere, because living without hatred feels pretty good.”

Leonardo DiCaprio’s girlfriend Camila Morrone responded directly to those mocking their relationship on her IG Story: “I just hope on this Friday that people learn to live with a little less hatred.” pic.twitter.com/gAI1GgveMA

Morrone stated that Leo is more than just her Instagram boyfriend. A picture of Leo taking photos of Camila on the red carpet of an event went viral.

During an interview with Vanity Fair, the model talked about the viral meme and she said, “I saw the meme. Poor thing, he’s being called an Instagram boyfriend. He’s an environmentalist and a movie star and it doesn’t mean a thing!” Camila openly talked about the age difference between her and her boyfriend. In an interview with The Los Angeles Times, the Mickey And The Bear actress spilled the beans on the pair’s age difference.

Morrone said, “There’s so many relationships in Hollywood⁠—and in the history of the world⁠—where people have large age gaps. I just think anyone should be able to date who they want to date. I probably would be curious about it too.” Leonardo and Camila attended the Oscars but just like Cannes, this time also the two of them made arrivals at separate times. The couple sat next to each other at the award show. This was the first time that the pair came to the same event during the award season.

The Once Upon a Time in Hollywood star celebrated the birthday of his girlfriend Camila. As per the reports of Page Six, Morrone celebrated her 23rd birthday with a yacht party, accompanied by the beau. Nina Dobrev and her boyfriend Shaun White were also invited to her party. The media outlet stated, “invitees wore cowboy hats and western attire,” and at that time Leo was the only guest who was spotted with a mask.

In the same month, the two were photographed by the paps while leaving Los Angeles’s favorite sushi spot Nobu. For their date night, Morrone wore an oversized olive-colored bomber jacket, ripped black denim, and red Converse sneakers, while DiCaprio tried to hide from the media under his matching green hoodie. They both were seen with masks as then Covid cases were on a rise.

A close source told E! News that Leo and Camila are in it for the long haul. The source said, “Leo and Cami are still going strong and doing really well. He’s very cozy with Cami and they’re serious.”

The source continued, “He is filming right now, but Leo has been settling into this domestic life with Cami, as opposed to all the time he used to spend out with his boys. He does really like his life with her and they’re a lot more coupley than they used to be.” 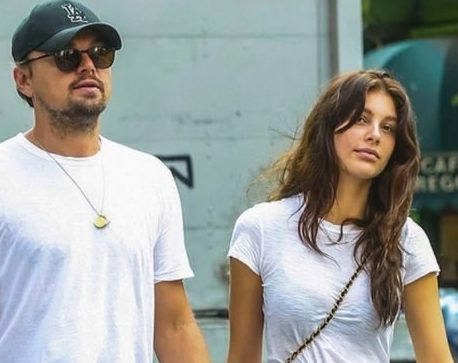 During the same month, the couple spent New Year’s Eve together. They were seen shopping at the Italian market, Table Mercato, in Boston to prepare a feast. An eyewitness Kaitlin O’Driscoll told People, “We couldn’t believe how much they were buying … We couldn’t even check out with all their stuff on the counter.”

According to the publication, the pair bought “pastas, sauces, crackers, homemade potato chips, fig jam, and other refrigerated items.” An employee of the store told People, “I just remember seeing those eyes from Titanic! … They ended up loading up so many things, I could barely grab them.”

Leonardo and Camila took another beach vacation. They went to Malibu with friends for a brief holiday. The Never Goin’ Back actress took to her Instagram to share a series of pictures from their vacation.

Leo and his girlfriend attended the US Open together on September 12, 2021. They were clicked while watching the men’s singles final match between Daniil Medvedev of Russia and Novak Djokovic of Serbia at the US Open. Leonardo and Camila were spotted out and about for a lunch date on March 21, 2022, in New York City. For their day out, Morrone opted for a long cream coat paired with black trousers, a black scarf, black fingerless gloves, and a pair of sunglasses while Leo wore a black puffer jacket, a button-up, and a pair of jeans. Do you ship Leonardo and Camila? Let us know your thoughts in the comments section below. Don’t forget to stay tuned with us for the latest updates from the world of showbiz.