“Wednesday”, a coming-of-age supernatural mystery comedy horror series, is currently the second all-time watched series on Netflix. The series based on the character, Wednesday Addams, premiered on Nov. 16, 2022, and has received predominantly positive reviews from critics. And guess what? Jenna Ortega’s performance is definitely a feast for fans. 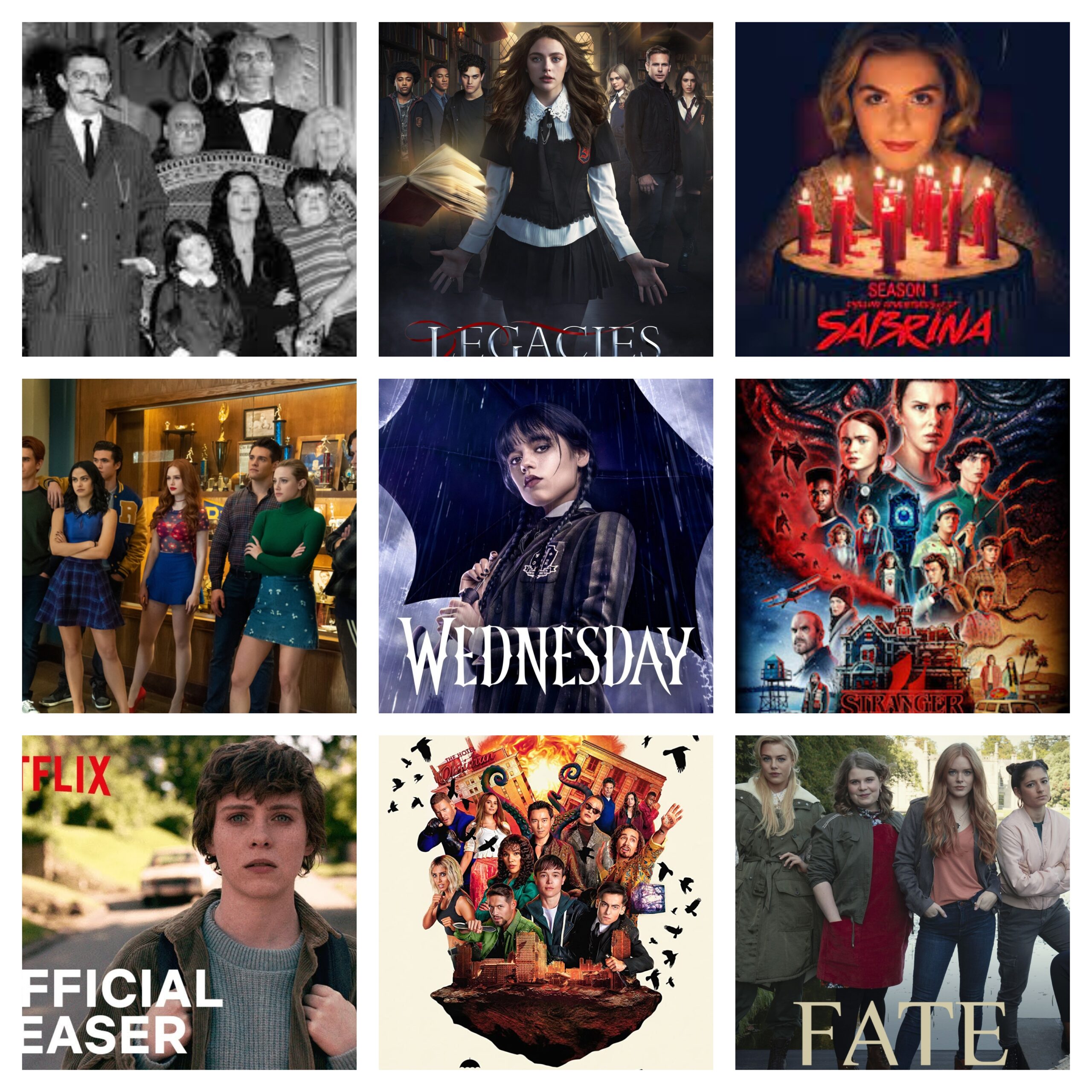 Within just three weeks of release, “Wednesday” became the second-most watched English-language Netflix series. With 341 million hours watched in its opening week, the Tim Burton horror comedy has beaten Stranger Things 4’s record for most hours watched. Now, if you’ve already binge-watched the season, I believe you’re looking for more Wednesday-like shows for this holiday. Here’s a list of eight shows to eye on.

If you’re a “Wednesday” fan, then the original “Addams Family” series is something you cannot miss. The sitcom ran from 1964-1966 and enshrines this quirky family in pop culture. It subsequently inspired a telefilm titled Halloween with the New Addams Family and cameos from the cast in other shows. For instance, the Addams Family movies of the early 1990s.

Since then many series and films have been made on this fictional family, created by American cartoonist Charles Addams. The series has an IMDB rating of 8/10 and remains a classic despite all the reboots available out there.

Where to watch: Available for free on Pluto TV or Tubi. You can buy it on Apple TV, Prime Video, Google Play or Vudu.

If you’re into werewolves and vampires, Legacies is yet another series to keep you engaged. A spinoff of the classic “The Originals”, the American fantasy drama television series by Julie Plec, premiered on The CW on October 25, 2018. The series is a part of “The Vampire Diaries Universe”, and in May 2022, it was announced that Season 4 would be the series’s final season.

Legacies depict the story of Hope Mikaelson, the daughter of Klaus and Hayley, who descended from the most powerful vampire, werewolf and witch bloodlines. Hope to take forward the events of “The Originals” and the premise is set at the Salvatore School, an institution for the young and gifted. The series has a 7.3/10 IMDB rating and an 82% rating on Rotten Tomatoes.

Where to watch: Subscribe on Netflix or buy all four seasons on Prime Video, Apple TV, Google Play or Vudu.

3. The Chilling Adventures Of Sabrina

Now, if you’re looking for something along the lines of “Wednesday”, The Chilling Adventures of Sabrina is a must-watch! Like Wednesday Addams from Nevermore Academy (a school for monstrous outcasts), Sabrina (Kiernan Shipka) is a student of the Academy of Unseen Arts, which provides supernatural schooling.

Another similarity is that both characters work towards solving murder mysteries while butting their heads with other classmates and authorities. The Chilling Adventures of Sabrina has a 7.4/10 rating on IMDB and an 81% rating on Rotten Tomatoes.

Where to watch:  Available by subscription on Netflix or you can also buy it on Prime Video, Vudu or Apple TV

Riverdale, an American teen drama series, which debuted in 2017, shared a lot of similarities with “Wednesday”. The dark series, based on Archie Comics and its characters, the series follows the stories of Archie, Betty, Veronica and Jughead, who transform from their school life to adulthood.

From monsters attacking supernatural kids in the forest to mysterious deaths, “Riverdale” features the tale of these teenagers who unravel the evils luring in the innocent town of Riverdale. In March 2022, the series was renewed for a seventh and final season. The final season will premiere in 2023. It has 6.6/10 ratings on IMDB and an 81% rating on Rotten Tomatoes.

Where to watch: All seasons are available on Netflix and Amazon Prime Video.

I Am Not Okay With This is a good choice while we wait for “Wednesday” Season 2. The coming-of-age black comedy is based on the graphic novel “I am Not Okay With This” by Charles Forsman. It debuted on Netflix in 2020 and stars Sophia Lillis and Wyatt Oleff.

The show follows the life of a 17-year-old girl Sydney who finds out about her telekinetic powers. Amid a troubled relationship with her mother, she also faces difficulties in controlling her superpowers. In some ways, it is surely similar to “Wednesday”. The series is rated 7.5/10 on IMDB and 86% on Rotten Tomatoes.

Where to Watch: Available by subscription on Netflix

The “Umbrella Academy” shares a lot of similarities with “Wednesday”. The lead characters in this superhero series are also considered misfits just like “Wednesday”. The series, which debuted in 2019, is based on the comic book series of the same name written by Gerard Way.

The Umbrella Academy Season 3  was released in June 2022, and in August, the series was renewed for the fourth and final season. The series has received several awards, including six Emmy nominations. It is rated 7.9/10 on IMDB and 86% on Rotten Tomatoes.

Where to watch: Available by subscription on Netflix

Fate: The Winx Saga is a lot similar to Wednesday’s plot. The series, which debuted on Netflix last year, is all about fairies. Bloom, the central character enrols into a magical boarding school in the Otherworld called Alfea. There, she meets her roommate Stella (a light fairy), and other friends like Aisah (a water fairy), Terra (an earth fairy) and Musa (a mind fairy).

These friends embark on crazy adventures, with creatures called Burned One taking over Alfea. However, this series isn’t ranked among the best teen shows to binge watch, the storyline of “Riverdale” is pretty similar to “Wednesday” and can appeal to fans. It’s rated 6.8/10 on IMDB and 45% on Rotten Tomatoes.

Where to watch: Available on Netflix.

Now, while I know you may have already seen Lucifer, I felt it was worth mentioning. The Tom Kapinos-created series stars Tom Ellis as Lucifer, the original fallen angel, who becomes dissatisfied with his life in hell. Well, he’s made Earth a crazy party place, with all the supernatural characters (friends and rivals) giving him regular visits at his lavish bar.

The series was originally released in 2016 on Fox, but despite a high viewership, the channel cancelled the series after three seasons. Netflix came into the picture in May 2018, when the streaming service picked up the show, and continued the series for a further three seasons. From light comedy and action to a lot of drama, the series definitely serves your palette. It has 8.1/10 ratings on IMDB and 86% ratings on Rotten Tomatoes.

Where to watch: All six seasons are available on Netflix.

Now, you must be wondering why I didn’t mention Stranger Things. Well, the show in itself is so legendary that it needs no reminder. Fans are eagerly waiting for the fifth and final season. But again, it appears like “Wednesday” is giving tough competition to Duffer Brothers. What do you think? Feel free to suggest more series like Wednesday in the comment box.