Bridgerton’s openly gay actor, Golda Rosheuvel who played the role of Queen Charlotte on the popular show Bridgerton was honoured with the Equality Award at this year’s Human Rights Campaign gala which was held in New York.

Before accepting the award, Golda said that “Being authentic and true to who I am has been something that I’ve championed in my own life, so to be able to get up there tonight and speak my journey is really important.”

“That one person who’s struggling might hear it and be confident enough to step (up) in their own life.” 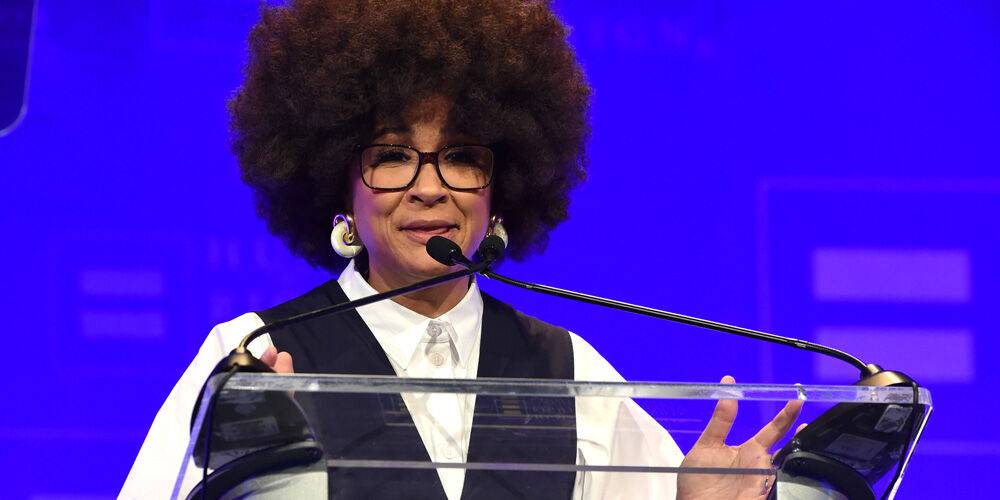 She later expressed that “nobody should have to choose between being publicly out and being a successful actor.”

It was recently only when she opened up on how she was once advised by a lesbian director to remain in the closet, on the “Just for Variety” podcast which is hosted by Marc Malkin.

“We were talking about being out and proud and representation and whether I should say I was gay in interviews,” she stated during the April 27 episode of the podcast.

As an upcoming actor who has just started her career in the cutthroat industry, Golda was advised to refrain from telling the world that she is gay. But this did not stop her from embracing what she wants.

In a recent appearance on the Just for Variety podcast, Rosheuvel talked about how she was encouraged by an unnamed lesbian director not to come out.https://t.co/NtadDd8xbI

She told Marc how “Love is love” and “It doesn’t matter whether it’s between a man and a woman when you are an actor creating a character.” Being entirely clear about how she feels about the LGBTQ + Community.

So happy to have worked with Golda Rosheuvel yesterday! I had to tell her how much i love bridgerton and that it’s so needed – just showing different cultures existing without it being politicized or THE topic 🙏🏾🥰 I’m grateful! pic.twitter.com/jbHEBSje0M

Golda even expressed further how she has accepted that she will never hide such an integral essence of herself from the world whether she gets the job or not. “I would rather lose a job than not be true to who I am. I’d rather not work in an industry that doesn’t accept me… It just wasn’t how I was raised.”

The Human Rights Campaign gala this year witnessed several political speakers who also came up to the stage to support the equality of the community.

These included the Gov. Kath Hochul of New York  and the Senate Majority Leader Chuck Schumer.

Governor Hoscul did her part by critiquing the legislation backed by Republicans which included the Florida’s controversial “Parental Rights in Education” bill.

All kids deserve a welcoming, inclusive school environment. Thank you, @repmarkpocan and @SecCardona, for working to ensure every kid — especially LGBTQ+ kids — can be seen and succeed in the classroom. https://t.co/bamktrOcAM

“I want new leadership in Florida that’ll change people’s attitudes and make them feel full of love and not hate,” Hochul took the stage at the event.

Gov. Hoscul even said that “what’s wrong with trans kids playing sports? Don’t you want them to grow up strong, healthy, competitive and take on life’s challenges? What are you afraid of? I’m asking these questions, but I’m in a position to do something about it because this is New York. New York always leads.”

Schumer was the one who pushed the Equality Bill in the U.S. Senate which would resulted in an amendment in the 1964 Civil Rights Act stating to add protections against ‘discrimination based on sexual orientation and gender identity.’

He expressed how “No LGBTQ or queer American should ever face discrimination because of who they are or who they love, As Senate Majority Leader, I’m going to put the bill on the floor and let’s see where everyone stands.”

With such support and recognition, we one day hope there is no more discrimination on terms of sexual orientation because as stated earlier ‘love is love’ no matter what.

Sahaj
I am Sahaj Manocha and have a degree in Economics. Writing is where I find myself when not studying !! It's my happy place where I can pen down all my thoughts whether Economical or not !!
RELATED ARTICLES
Culture