Supermodel Bella Hadid has landed in the headlines again for speaking in favor of Palestine and calling out Instagram for ‘shadow-banning’ her. 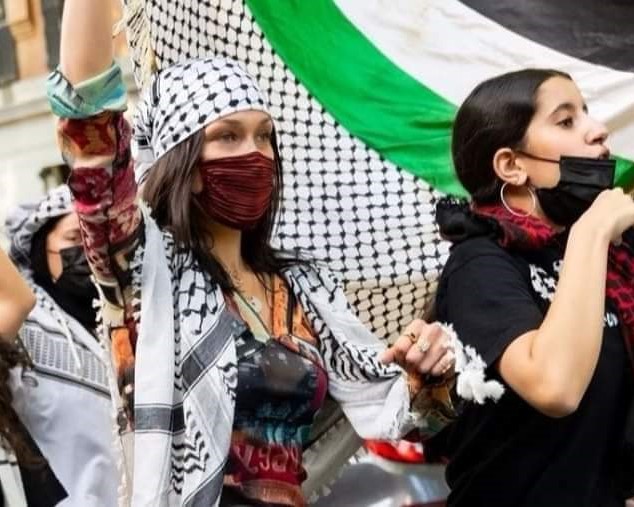 The Palestinian-Deutsch supermodel has always been vocal against the atrocities being committed in Palestine. The most recent incident occurred when she tried to share stories about the attack on worshippers in Masjid Al Aqsa.

According to Bella Hadid, Instagram is shadow-banning her posts whenever she posts about Palestine. Bella recently posted a story where she wrote “When I post about Palestine I get immediately shadowbanned and almost 1 million less of you see my stories and posts.”

To show proof, she posted a story yesterday where she wrote “Here we go again” suggesting that she has been shadow banned again as she was unable to see details about her story on Palestine.

She posted a bunch of videos and pictures on her timeline that started with “I urge you to watch every one of these videos. Whether it is a 12 year old child being suffocated by a grown man, or a mother of 6, running with her hands up, shot by the military. An elderly man on crutches, unable to fight back, being thrown to the ground. A child and his father being terrorized for absolutely zero reason.”

Talking about people trying to suppress her and other people who spoke up, she wrote “If you really would like to silence me, just like the journalists, or really anyone trying to educate about Palestine, @instagram, I will continue to come forward with peace , showing factual information about how the IDF, Israeli government, and settlers attack innocent Palestinians for no reason, except for simply being Palestinian.[sic]”.

She also wrote about how she was called a terrorist since her childhood just because she was Palestinian and how her father was driven out of the land when he was only 9 days old. Bella ended the post with a clarification about how this was not about religion.

This is not the first time that Bella has spoken up for Palestine. In 2021, she also joined a march in New York amid the Israel-Gaza attacks to show support for Palestine. She wore a scarf on her head and carried the Palestinian flag.

After the march, she also shared a series of videos and photos on Instagram where she wrote “The way my heart feels.. To be around this many beautiful, smart, respectful, loving , kind and generous Palestinians all in one place… it feels whole ! We are a rare breed!! It’s free Palestine til Palestine is free!!! P.s. The Palestinian drip is real #FreePalestine [sic].”

Previously, she had also shared a picture of her grandparents who got married in Palestine. She wrote about how they went on to have 8 children who had to become refugees in Syria, Lebanon, and then Tunisia due to the conflict. She ended the post with “I love Palestine I will stand strong to keep their hope for a better land in my heart”.

Bella’s post about her support for Palestine have also gotten her a lot of backlash along with the support. After she participated in the march for Palestine in 2021, rumors started that Dior and even Michael Kors ended their contract with her due to her stance.

However, the fashion dog page called Diet Prada reached out to Dior for comments regarding their contract with Bella. Although Dior did not get back to them with an answer, Diet Prada said that multiple people from LMVH confirmed on anonymity that the brand was standing by the supermodel and did not cancel their contract with her. One source said, “LMVH’s stance on politics is neutral, but they are not canceling Bella’s contract”.

The rumor started when a TikTok went viral stating that Dior had canceled their contract with Bella after her pro-Palestine stance. The TikTok also misspelled Palestine as ‘Palistine’ thus indicating towards the inauthenticity of the video.

Although Bella might be one of the more vocal celebrities, some other prominent names have also  come out to show solidarity with Palestine.

The American Oscar-winner actress Viola Davis posted on her Instagram to show encourage people to talk about Sheikh Jarrah and the forceful evictions of Palestinians.

Natalie Portman, a fellow Israeli-American actress has also called out Israel for its ill-treatment of Palestinians. In 2018, she even rejected the Genesis Prize, which is the Israeli version of the Nobel Prize for the same reasons.

Other celebrities including Dua Lipa, John Oliver, and Selena Gomez are some of the names who supported Palestine. Kendall Jenner, a close friend of Bella Hadid also shared Bella’s post on her story.

Gigi Hadid Speaks Up For Palestine As Well

Bella is not the only Hadid who speaks up for Palestine. Bella’s sister Gigi Hadid also has repeatedly spoken up for Palestine. Gigi is also a model who has featured in over 30 Vogue covers. Talking about the oppression she said, “One cannot advocate for racial equality, LGBT & women’s rights, condemn corrupt & abusive regimes and other injustices yet choose to ignore the Palestinian oppression.”

She also reiterated that her stance is not pro-religion. Gigi recently tweeted the following.

I’ve said it before and I’ll say it again. For me, this is not about religion or one against the other – it’s about the greed. #FreePalestine #freegaza #coexist ☮️

Recently, she pledged to donate her earnings from Fall 2022 shows to those suffering from war in Ukraine. She also added that she would continue to support “those experiencing the same in Palestine”.

Gigi’s ex Zayn Malik from One Direction also spoke up for Palestinians in a post last year. However, this was not the first time he tweeted this. Back in 2014, he tweeted #FreePalestine and got a lot of hate for it.

Being vocal about any cause can land you in trouble. It can be particularly difficult when people on the internet get to critique your opinion and comment on it. However, speaking up has helped break stereotypes and raise awareness at the same time. Bella Hadid’s stance on Palestine shows that you can be a successful and famous person and still advocate for what you believe in.

Khadija
A spirited writer who looks at the world with an inquisitive mind. Passionate about many things, she is an active campaigner for equality and mental well-being. She wants to change the world, one blog at a time.
RELATED ARTICLES
Culture