Actor Jay Ali has secured a role in Netflix’ “Daredevil” series as a regular and gave the proverbial finger to old haters, rather, advisors with his announcement.

In season 3 of the Marvel show, the handsome British actor will play a new character named Rahul “Ray” Nadeem. Rahul is an FBI agent that will go to great lengths to protect his family. Ali’s character is ambitious and an honest agent. The cast also features Charlie Cox as Matt Murdock aka the Daredevil, Deborah Ann Woll as Karen Page, Elden Henson as Foggy Nelson and Vincent D’Onofrio as Wilson Fisk.

The creators of the Netflix show have developed an intriguing storyline for Ali’s character. They’re also impressed with Ali’s work and are excited about the reaction of the audience to this new addition.

“I love Jay Ali,” said Erik Oleson, the executive producer and showrunner of “Daredevil.” “It Isn’t easy to join a cast as talented as Marvel’s Daredevil – and Jay blew us all out of the water with his audition. His moving performance in Season 3 will show the world that he’s a star in the making.”

You may already be aware of this hottie’s star power. He’s worked on shows and films like “The Fosters,” “Significant Mother,” “Me, Myself, and I,” “Pitch,” and “Darling Companion.” 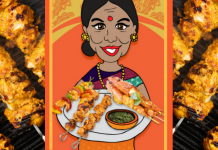 Lobster, Salmon, and Shrimp Recipes the Griller in you Will Love